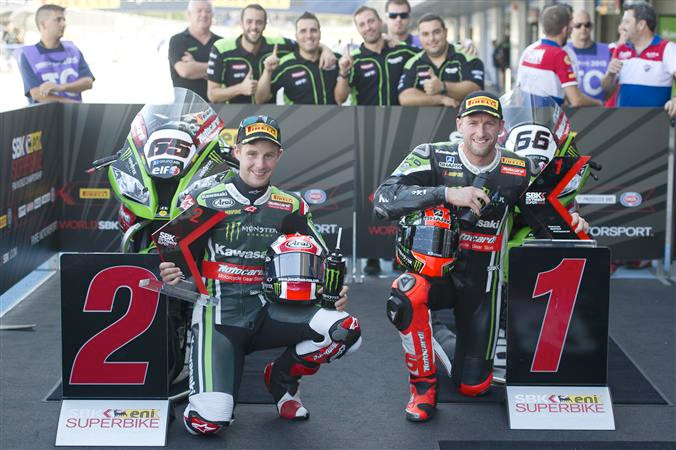 Tom Sykes (KRT) and Jonathan Rea (KRT) headed the field after Superpole qualifying at Jerez in the FIM Superbike World Championship round, with Sykes setting a new track best of 1‰Ûª40.292.

Having both gone straight into Superpole 2 on their official Ninja ZX-10R machines, Sykes and Rea had contrasting early experiences on their first fast Superpole lap on race tyres.

Rea was quick right away and Sykes slower than he had expected to be, but in the final push for grid position. After the qualifying tyres had made an appearance Sykes swept to his 29th career pole position at pace even long term championship leader Rea could not quite match.

Rea‰Ûªs overall Superpole performance was all he had hoped for in readiness to try and take the title on raceday.

‰ÛÏA few guys are very strong so it is good to be at the front for tomorrow‰Ûªs two races." Sykes stated. "I like to ride out front, that is how I like to do it. I do not like anybody behind or in front of me - I just like to go and race the tarmac.

"We found some clear air but had a difficult time in the first run with the race tyre, and the lap time was incredibly slow. When we put the qualifying tyre into the Ninja ZX-10R for the second run it was very easy to manage. It was such an enjoyment to ride then and to get the record was just a little bit something extra for today. Overall the target was the front row and I think our race pace is also OK.‰Û