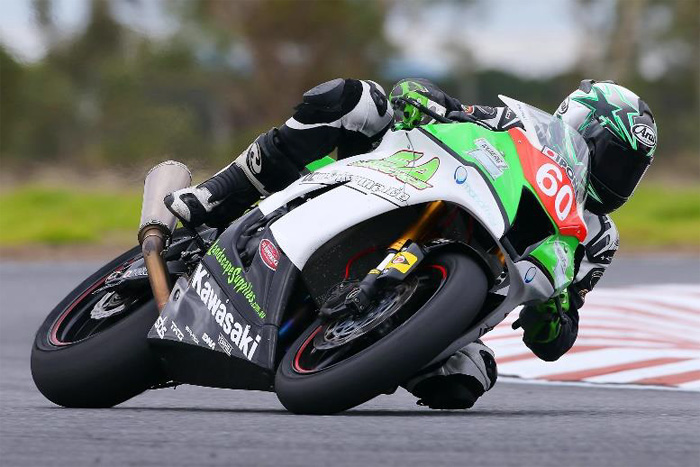 The final day of racing at the Mallala round of the Swann Insurance Australiasian Superbike Championship brought some brilliant results for the SA Kawasaki BCperformance team, with special mention to Paul Young for his sensational results.

The sun was blazing, keeping everything nice and warm on track, giving rider‰Ûªs wonderful grip once the tarmac warmed up. Some changes had been made to the operating procedures of the team prior to the race meeting at Mallala and courtesy of those changes, the team worked in perfect unison, making the entire operation significantly more efficient for all involved.

SA Kawasaki BCperformance superbike riders Ben Burke and Evan Byles had a great day out on track, with both putting in very solid performances all day long. Ben set a great time in race one, tussling with Cru Halliday and Matt Walters, eventually getting the better of both riders to come home in 6th.

Race two had Ben caught in a three way battle for fifth but was unfortunately bested by both Cru Halliday and Sean Condon, coming home in 7th. Unfortunately Ben lost the front end at turn three during race three after what Ben described as a ‰Û÷Love touch‰Ûª by one of his fellow competitors, bringing his weekend to an unfortunate close.

‰ÛÏI was very pleased with my weekend‰Ûªs racing." Burke said. "We were able to bridge the gap to the leading group and the developments the team made between rounds one and two have made the whole package much better.

"I‰Ûªm now looking forward to round three with some more developments coming to help run with the leaders more consistently. I‰Ûªd like to thank my sponsors for all of their support.‰Û