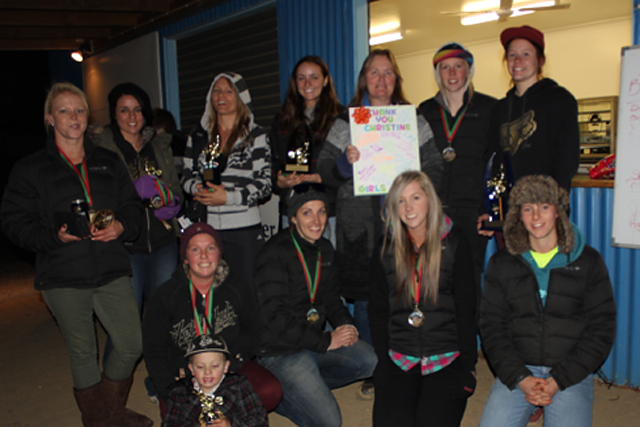 With the 2013 Tasmanian Womens Motocross series coming to a conclusion earlier this year on Sunday the 19th of May, supporters and organisers of the inugural series are already planning to not only continue but grow the series next season.

One person who is more than looking forward to seeing the series grow, is 2013 series winner Morgan Wright. Wright was unstoppable in this years three round series, taking a comfortable win over second placed Emily McCarthy and third placed Jenna Lupo

I am really stoked that I got to take part of and win the overall Taz Women's Motocross Series, it was really good that all the girls across Tasmania took the time to help make up the numbers to make the first real Women's Series in Tassie" Wright enthused. We all enjoyed ourselves and are keen for more next year!"

Wright will look to build on her state success when she heads to the Women's Nationals, being held at the Lakes Motocross track in New South Wales in October this year.

"I'm now training hard for the Women's Nationals in October this year in NSW More racing like this will help all of the females throughout Australia," Wright concluded.

Another rider who is hopefull that the series will grow in 2014 was runner up Emily McCarthy. McCarthy enjoys the family aspect of motocross racing and was excited to see not only young women on the start line, but also mums that were lining up to race.

"I really enjoyed the Women's Motocross Series, it is great to have a start gate with all women, some of these even being mums." McCarthy stated. "It created a fair bit of interest and many people wondered why it hadn't happened before.

"I find motorbike racing a great family sport, it is not unusual for the whole family to be up at 4am Sunday morning, too early for breakfast, and drive two or more hours to a race meeting. Sometimes it is cold and wet but all that is forgotten when you are on the start line!

I love the excitement and adrenalin of racing, there aren't many sports that compare." McCarthy continued. "Some people ask "isn't it dangerous" but really you are mostly in control of your risk factor, you don't have to be out in front to be having fun.

"Having the girls all race together has been good because we have met new people from other areas of Tassie and we can all encourage each other now. I really hope that more ladies that ride get behind this and we have another series next year, I'm really keen for it." McCarthy concluded.

Third ranked rider for the series Emily McCarthy is hopeful that with over 20 female competitors lining up for the 2013 series, that it will encourage more Women racers to grab a bike and go racing next year.

"I'm proud to have been able to be included in the first ever Taz Women's Motocross series, and it was amazing to be named 3rd fastest in the state." Lupo enthused. "This should be a turning point for women racing motocross; now that they've seen us racing, they might fell inclined to grab the bike out of the shed and have a go at it.

"I feel very priviliged to have participated in the first one, and I'm excited for the event to grow bigger and better each year. You will definitely see me out there next year!," she concluded.