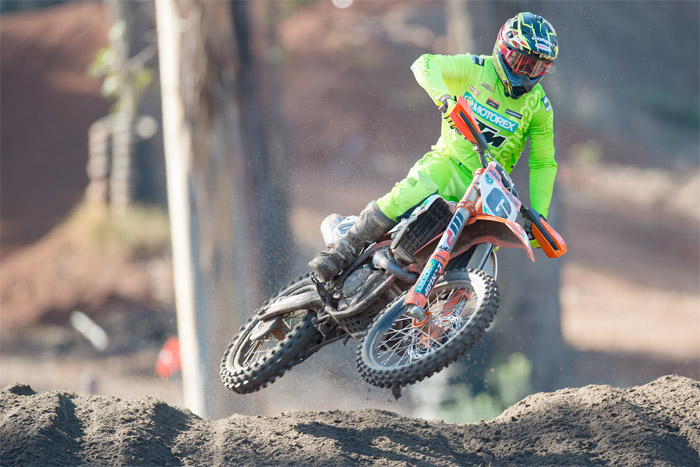 KTM‰Ûªs MX Nationals series championship leader Kirk Gibbs was unlucky not to defend the Manjimup 15,000 title that he won in 2015, at this year‰Ûªs running of the famous Aussie motocross classic, three hours south of Perth.

The KTM Motocross Racing Team rider looked well on track to successfully defend his title midway through the day, after winning the first two of four All-Star motos and the Eliminator event.

However his good friend and fierce rival Todd Waters struck back with victory in the third race, and with it all on the line in the fourth, Gibbs powered into an early lead, but relinquished first place with a soft fall, and soon after suffered a flat rear tyre, which forced him to limp to the finish and accept third in the race and second on the day.

‰ÛÏIt‰Ûªs always awesome to go to Manji, I enjoy riding there." Gibbs commented. "The early wins really helped but unfortunately the last two races didn't go quite to plan and Todd rode really well. He beat me fair and square in the third one, and then in the last one I was out front and just had a little tip over.

"I tried to catch up but a lap later I had a flat tyre and had to nurse it home. It was disappointing but I had a pretty good crack at it. I knew was going to be pretty tricky after the fall with the way Todd was riding.

"Toddy and I are still really good mates and we race clean, and we both accept that the better man wins on the day and we‰Ûªve just got to cop it on the chin and take it like a man.‰Û 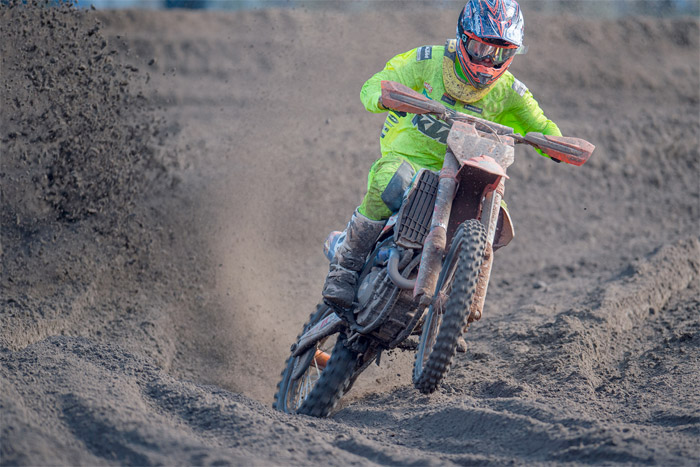 ‰ÛÏIt was pretty surprising how competitive the 350 was, I think even the boys were surprised, because Manjimup is a really fast track." Ward said. "I got pretty good starts all day, in the first race I came around right behind Gibbsy so that was pretty cool.

"I was a bit nervous and tight in the first one racing Kirk and Todd, and I didn't really get to compare myself to them much throughout the day - they were right on it. I basically spent the whole day battling with Dobson so that was pretty cool, we haven't raced each other since 2013 so it was pretty sweet.

"We both wanted to beat each other to get third overall on the day, but it worked out we were too busy focusing on each other and we stuffed it up and Webster ended up with third overall. But it was still a cool day.‰Û