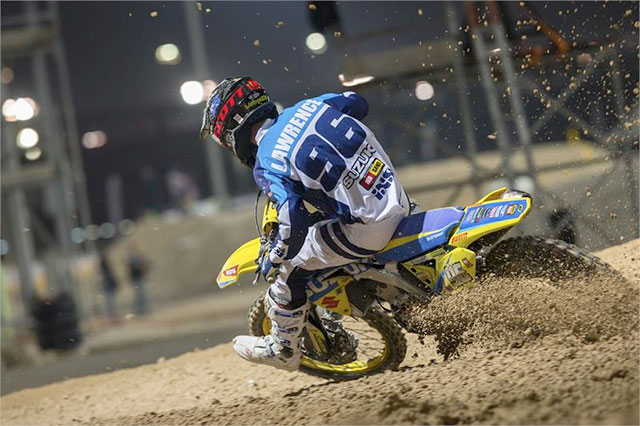 Young Australian Hunter Lawrence kicked off his hunt for the MX2 World Championship with a eleventh overall at the opening round under the floodlights at Losail International Circuit in Qatar.

The Suzuki World MX2 rider scored (18-6) for 11th overall on his debut in the World Championship.

A solid showing in pre-season has raised his profile and he showed everyone once again that his rookie campaign won‰Ûªt just be learning the tracks, as he put down laptimes that should see him up at the very top of the field before very long.

Unfortunately, a couple of mistakes in the first moto dropped him down the proceedings but in the second moto he followed his team-mate Jeremy Seewer through the pack, learning every lap and finishing a very impressive sixth place.

‰ÛÏFirst moto I was feeling good. I didn‰Ûªt get the best start, top 15-20 something like that and I was coming through the pack pretty good and I was happy with how I was going," Lawrence explained. "Then I made a mistake on my part with another rider, a rookie mistake. Got back up, finished 18th which isn‰Ûªt the best but this is the world championship and it‰Ûªs not going to be easy.

"I came back in, put it behind myself and looked forward to going out there and doing it again. Second race I got a better start, around 12-13, made some passes and found myself inside the top 10, coming through to finishing sixth behind Jeremy.

"It felt like we had a good rhythm going as a Suzuki train, so that was pretty cool. Really though, I‰Ûªm just happy to have got it out of the way, the first round can have a lot of carnage so I‰Ûªm happy to be walking away with no injuries and to have made good progress,‰Û