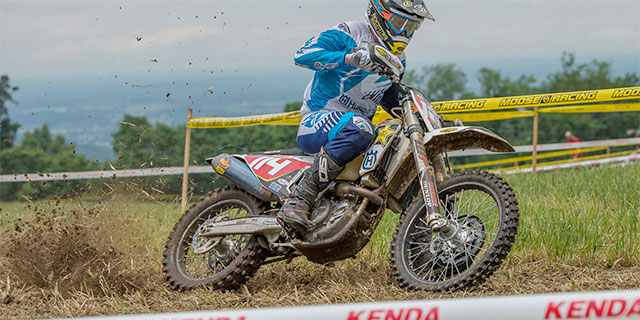 Riders from twenty states converged in Altamont, TN for the fourth round of the KENDA Full Gas Sprint Enduro Series presented by Moose Racing.

With severe storms moving from Texas throughout the entire East Coast it looked like a mud race was almost a guarantee, but storms swirled around the mountain top location during Saturday‰Ûªs racing treating riders to nearly perfect conditions on the rolling grass track cross test and the 100% fresh-cut enduro test.

It wasn‰Ûªt until two tests to go on the second day of racing that the sky opened up and a torrential rain storm soaked the property making the final two tests of the day slippery and technical, reminiscent of European World Enduro tests that serve as the inspiration for the series.

The first racer to hit the cross test was previous round winner, Coastal Racing‰Ûªs Layne Michael, who put down a 3:24.900 test time good enough for second-place on the test behind Rockstar Energy Husqvarna‰Ûªs Josh Strang‰ÛÓwho took the first of seven cross test wins for the weekend‰ÛÓwith a 3:20.937 test time. SRT Off-Road‰Ûªs Cory Buttrick was 3rd in the test ahead of series points leader, AMPRO Yamaha‰Ûªs Daniel Milner. FMF/KTM‰Ûªs Russell Bobbitt was the 5th pro in the test, but 6th overall as amateur racer Billy Schlag snagged a fifth-place in the test to start the weekend. 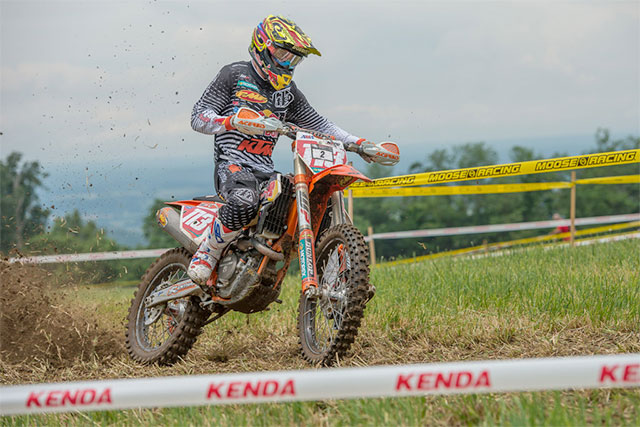 Russell Bobbitt finished 2nd overall for the weekend.
Strang and Michael would stay at the top after the second test of the day, the racer‰Ûªs first time through the enduro test, with Strang extending his lead to 8-seconds after two tests ahead of Michael. Westfield Powersports KTM racer, and Tenneseee native, Jordan Ashburn would get into the mix with a 3rd-place finish in the enduro test ahead of Russell Bobbitt and KR4 Performance‰Ûªs Thad DuVall who was racing aboard a Husqvarna TE300 two-stroke, the same machine he will be racing in this year‰Ûªs ISDE in Spain as a member of the USA World Trophy Team.

Disaster struck in the enduro test for series points leader Daniel Milner who would break his fibula in a crash when his front wheel washed out in a corner.

‰ÛÏI lost the front end and went down and my leg felt like it just shattered,‰Û 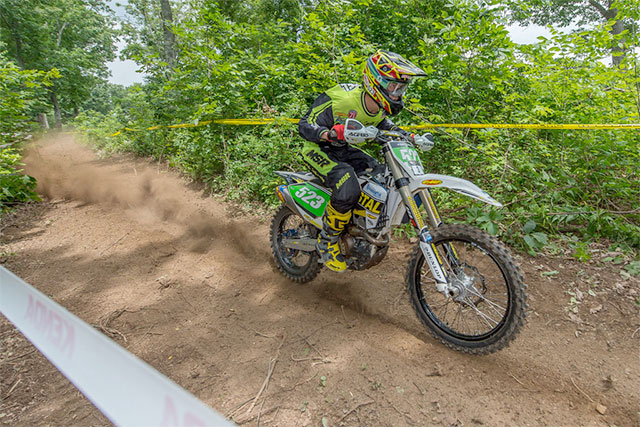 Layne Thompson ended up 3nd for the round.
At the end of the first day of racing, Strang was out front with a 33-second lead ahead of Jordan Ashburn who had a four-second cushion over Russell Bobbitt. Layne Michael sat another four seconds behind Bobbitt with Cory Buttrick in fifth and Thad DuVall in sixth, only twenty-seconds behind Ashburn setting up a five-way battle for the podium on the second day of racing.

A rain shower early on Sunday morning meant slick conditions for the first racer to hit the cross test, but Josh Strang continued his solid ride and extended his lead with the test win and would never look back, taking 2 more cross test wins on the day and staying in the top-5 in both enduro tests to take the overall victory by 1-minute.

Thad DuVall, who switched back to his familiar Husqvarna FC350 for the second day of racing grabbed the second test win to get himself back into contention for a podium spot on the weekend but would ultimately fall short after two bad tests as the rains began to fall. He would, however, move into the overall series points lead after Milner‰Ûªs injury.

Russell Bobbitt seemed to get faster as the conditions worsened, taking the final enduro test win as the rain began to fall heavily. The enduro test win and a 3rd-place in the final cross test of the weekend were good enough to secure a 2nd-place finish for the FMF/KTM racer, his first Full Gas Sprint Enduro podium of the year.

‰ÛÏAshburn got me by two seconds at the end of Saturday so I knew I had to pick it up on Sunday,‰Û 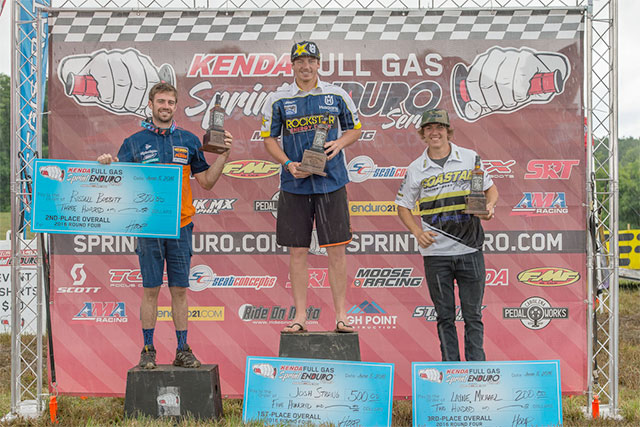 The Altamont podium.
Round three winner, Layne Michael, would also move past Ashburn in the overall to claim the final podium spot for the weekend. ‰ÛÏI put myself into a hole with a bad fourth test on Saturday but was able to pick up the pace today and get back onto the podium,‰Û