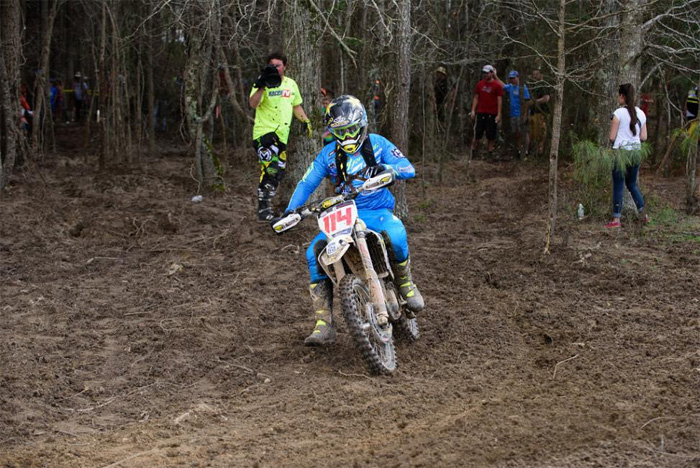 With two wins behind him already, Rockstar Energy Husqvarna Factory Racing/Bel-Ray's Josh Strang looks to make it three-in-a-row at this weekend's FMF Steele Creek GNCC, an event that is now considered his home race.

Strang's consistency has been hard to top, but FMF/KTM's Factory Racing's Kailub Russell will be looking to end Strang's winning streak and take his first win of the season. Russell, another North Carolina transplant, will attempt to utilize the home turf advantage this Sunday as he looks to capture his first victory of the season.

Josh Strang swept the first two rounds of the 2016 season, and will look to continue his success this weekend in North Carolina.

"I really like Steele Creek and there's always a huge fan turnout," said Strang. "It's a great track and I'm just going to keep training how I have been and just have a good time as I go for the win."

Russell's teammate, Charlie Mullins, will be making his return to GNCC Racing after a season-long hiatus where he underwent surgery and physical therapy for a double-wrist injury. Mullins is known for consistent finishes at Steele Creek and will look to repeat his success in his home state.

N-Fab/AmPro Yamaha's Daniel Milner sits in the third place position following a podium finish at the season opener. After having his career-best finish in Florida, the Australian struggled in Georgia but still finished ninth and heads into this weekend with hopes to make his way back to the podium.

Coastal Racing/Rockstar/Husqvarna's Ryan Sipes hasn't got the start he was looking for thus far in the season. However, Sipes was able to bounce back from dead last at the first two rounds to get a fifth and seventh place, but is eager to take home his first GNCC overall win.

Sitting just one point behind Sipes is SRT/KTM/Kenda Tires' Steward Baylor. After making his first podium appearance in four years at the last round, Baylor not only has the knowledge of what it takes to be a top contender, but also the confidence.

"Steele Creek has been a long-time favorite of mine," said Baylor. "It's normally a lot of tight trails and it makes for good racing. My plan is to get a good start and stay up in the front."

Top Image: Josh Strang swept the first two rounds of the 2016 season, and will look to continue his success this weekend in North Carolina.