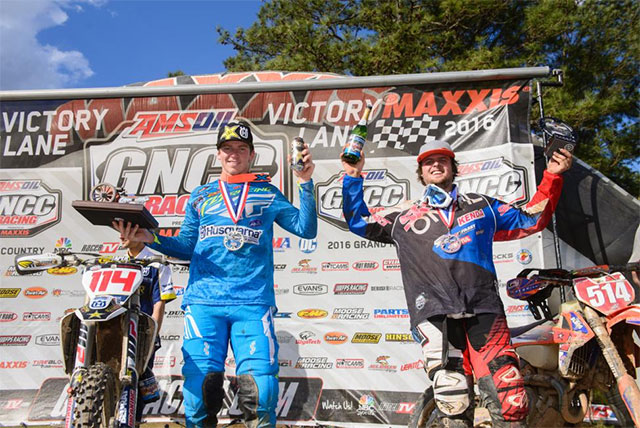 The forecasted rain was nowhere in sight creating a great day for racing, where Rockstar Energy Husqvarna Factory Racing/Bel-Ray's Josh Strang came out with the overall win.

It did not take long for FMF/KTM Factory Racing's Kailub Russell to make his way to the front as he grabbed the $125 All Balls Racing XC1 Pro Holeshot Award with Obermeyer/MCS Suzuki's Chris Douglas right behind him. Russell continued to lead the pack through the first lap before feeling the pressure from Strang.

The battle for first continued on the second lap as Russell and Strang swapped the lead, before Russell was able to pull a 15 second lead, which he held for majority of the race. Once the two-lap card came out Strang started slowly gaining on Russell where he was able to catch up to him by the time the white flag was thrown. Just after the pro pit, Russell stopped for a drink where he made a small bobble, Strang was able capitalize on the mistake where he took the lead and claimed the inaugural win.

"On the third lap I got caught up in a vine and that put me back a little," said Strang. "I had to ride pretty hard to catch back up and I was able to make the pass and put a little gap on him after Russell stalled in the pits. It was a fun race and it's good to get another win."

Russell was unable to make the podium presentation due to being attended to by the medical crew where he suffered from dehydration.

Rocky Mountain ATV*MC/KR4/FAR Racing Husqvarna's Thad Duvall was running in the third place position until he ran out of gas on the fourth lap. Duvall would end up finishing the race eighth in XC1 Pro and 10th overall.

After Thad dropped from podium contention, the third place position was opened where FMF/KTM Factory Racing Russell Bobbitt and SRT/KTM/Kenda Tires' Steward Baylor would battle on the last lap. The biggest surprise of the day was Baylor taking the final podium position. It has been four years since his last appearance and this finish marks his first XC1 Pro podium.

"I've had my fair share of injuries and it's nice to finally show my competitors that I can run with them," said Baylor. "I wasn't the fastest guy on the track, but I felt strong and consistent and that paid off and got me on the podium."

In the XC2 Pro Lites division JCR Honda/Lucas Oil/Maxxis/FLY Racing's Trevor Bollinger had an impressive ride finishing third overall on adjusted time ahead of many of the XC1 Pro riders. Bollinger lead the rest of the XC2 Pro Lites class by almost two minutes. Beta USA/FLY Racing/Kenda Tires-backed Jesse Groemm made his first podium appearance of the season second in class, and Coastal Racing/Husqvarna's Layne Michael rounded out the top three.