Continuing to impress in his first season of senior class competition, Beta's Steve Holcombe claimed his first overall EnduroGP win of 2016 on day two of the GP Polisport of Portugal.

Showing that he had the speed to win on day one, Steve Holcombe mistake free during the second day of competition to place just under seven seconds ahead of TM rider Eero Remes with enduro rookie Nathan Watson (KTM) an impressive third.

‰ÛÏI‰Ûªm made up with this result. I got close to winning on day one so to finally get the job done and a first EnduroGP win to my name is great,‰Û 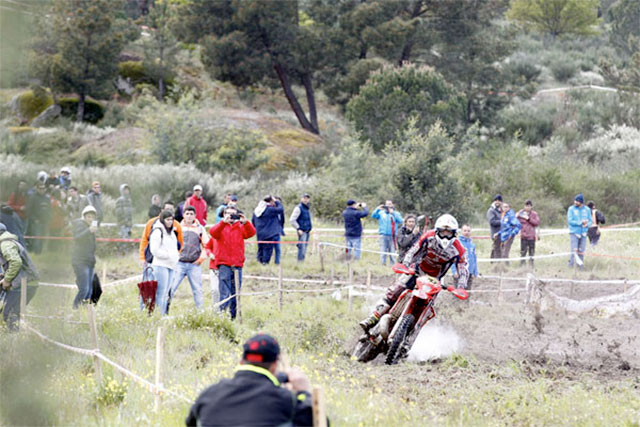 Beta's Steve Holcombe took out day 2 in Prtugal
Showing that as well as topping the Enduro 1 class podium he‰Ûªs also more than a match for the bigger bike riders in the EnduroGP class, 250f TM mounted Finn Eero Remes pushed Holcombe hard though out the day. Also 250F mounted, Nathan Watson enjoyed a good day. Despite his lack of enduro experience he again showed impressive speed to place just 15 seconds behind winner Holcombe. Behind Watson US rider Taylor Robert (KTM) excelled in conditions that were anything but familiar. Unable to repeat his day one winning result Matt Phillips placed in sixth with Mathias Bellino bringing his Husqvarna home in ninth following a day full of mistakes.

As a result of their strong overall performances Eero Remes and Nathan Watson placed first and second in the Enduro 1 class with Jamie McCanny (Yamaha) third. With just under nine seconds separating Remes and Watson, McCanny battled his way to a podium result more than one minute behind Watson. Jamie‰Ûªs brother Danny McCanny (Husqvarna) enjoyed his best day of the championship so far finishing fourth while Pascal Rauchenecker (Husqvarna) and Gianluca Martini rounded out the top six.

Just four days into his first ever season of EnduroGP competition Taylor Robert enjoyed his first winning result, impressively topping the Enduro 2 class aboard his KTM. Riding well throughout the day he placed ahead of Matt Phillips with Alex Salvini (Beta) joining them on the podium. 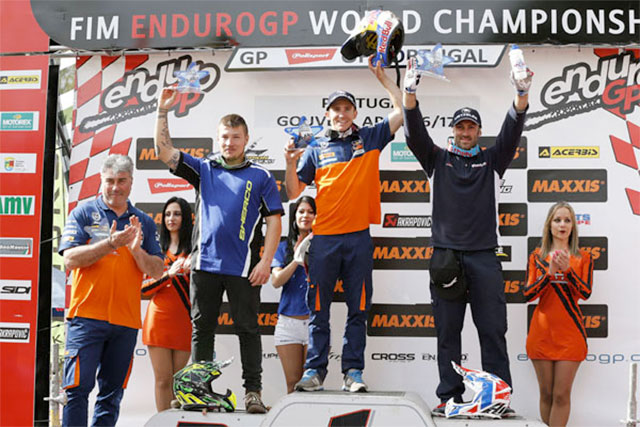 Matt Phillips made the E2 podium
Loic Larrieu (Yamaha) finished closer to the Enduro 2 podium than on any previous day of the series so far, finishing just over five seconds behind third placed Salvini. Separating Yamaha team mates Larrieu in fourth and Cristobal Guerrero in sixth was Mathias Bellino. Enduring a difficult day the Frenchman placed 35 seconds behind winner Robert.

In the Enduro Junior class Italian Giacomo Redondi (Honda) claimed a sizeable win, placing more than one minute ahead of Diogo Ventura (Gas Gas). Winning the day‰Ûªs first special test Josep Garcia (Husqvarna) was an early retirement as the Spaniard was forced to withdraw with a technical problem. Third went to Swede Albin ELOWSON (Husqvarna).

The EnduroGP championship now heads to Greece on May 20-22.