Beta's Steve Holcombe started his title defence in perfect fashion going back to back at the two opening rounds in Germany. Photo: Future7Media
Following an eventful first day, the EnduroGP stars were back on track for another day of competition in Dahlen, Germany with Beta's Steve Holcombe once again showing the way.

The tests had been significantly 'cut up' after so many competitors riding on the first day/round, and therefore this second day offered up a lot of surprises.

Steve Holcombe did not have the same disadvantage as Day 1, where he had to open the tests. With the course well 'bedded in', the reigning EnduroGP Champion got into his rhythm immediately. The Brit impressed from the start, winning 8 specials in a row on scratch.


Only Davide Guarneri, Brad Freeman and Danny McCanney managed to 'steal' test victories from the Beta Factory rider on the overall times. Despite the pressure and the fatigue of the tough terrain, Holcombe showed perfect control. The season is just beginning but Holcombe already seems to be at the top of his game. Naturally, he is leading the EnduroGP class and E3 class at the end of this weekend in Germany.

"I'm really happy with this result, but to be honest I was a little tired from yesterday, I attacked a lot during Saturday. I'm not at the top of my game yet, but this result is very encouraging,‰Û 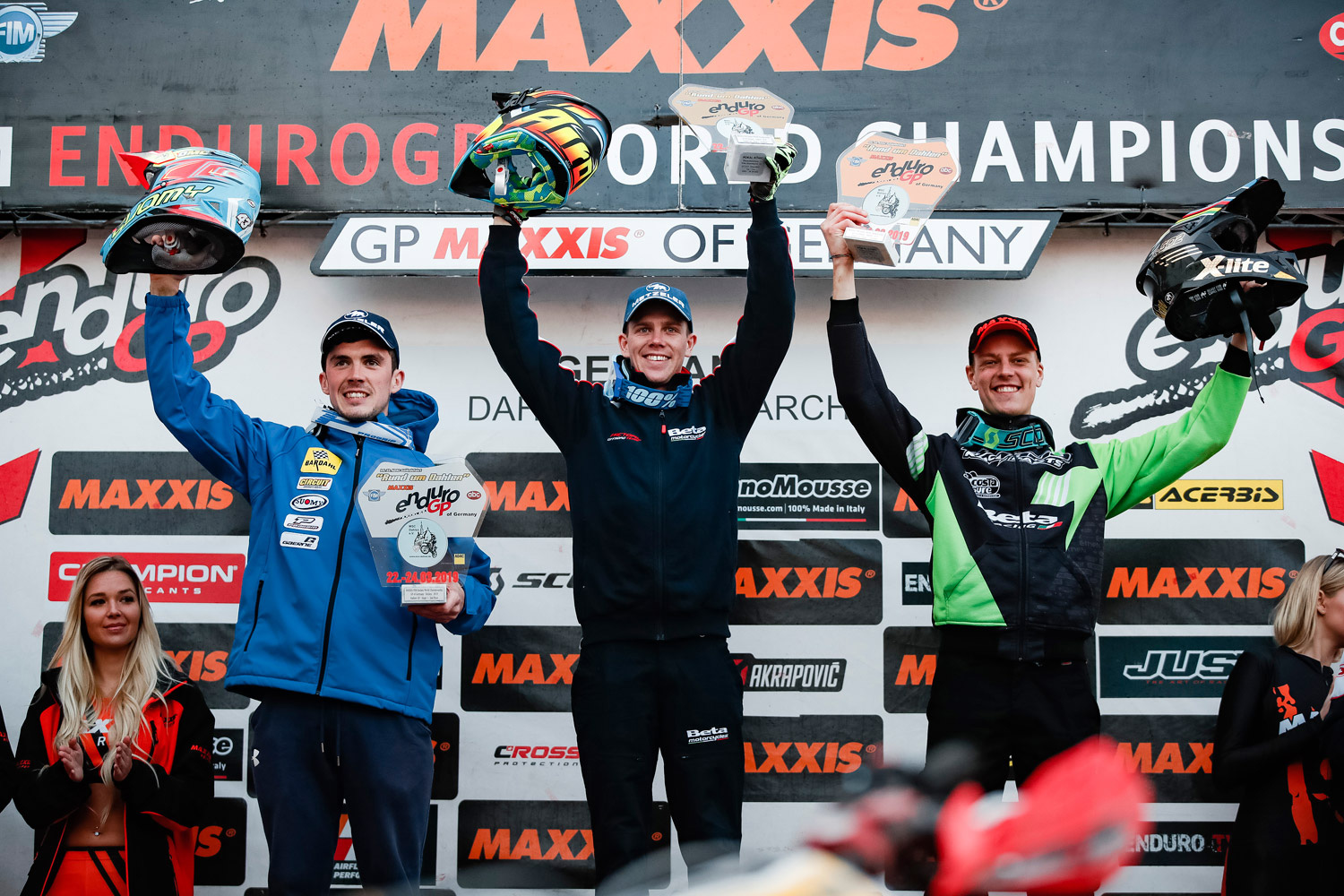 The EnduroGP class podium.
Danny McCanney finished 3rd overall on this 2nd day and his debut weekend with TM Factory. The Brit could not fight back against Freeman, but he remained focused to secure an important 3rd spot.

"I finish 3rd today, I'm a little disappointed, but overall I'm very happy with my weekend," McCanney said. "I can't wait to continue the season and gain some more good results.‰Û 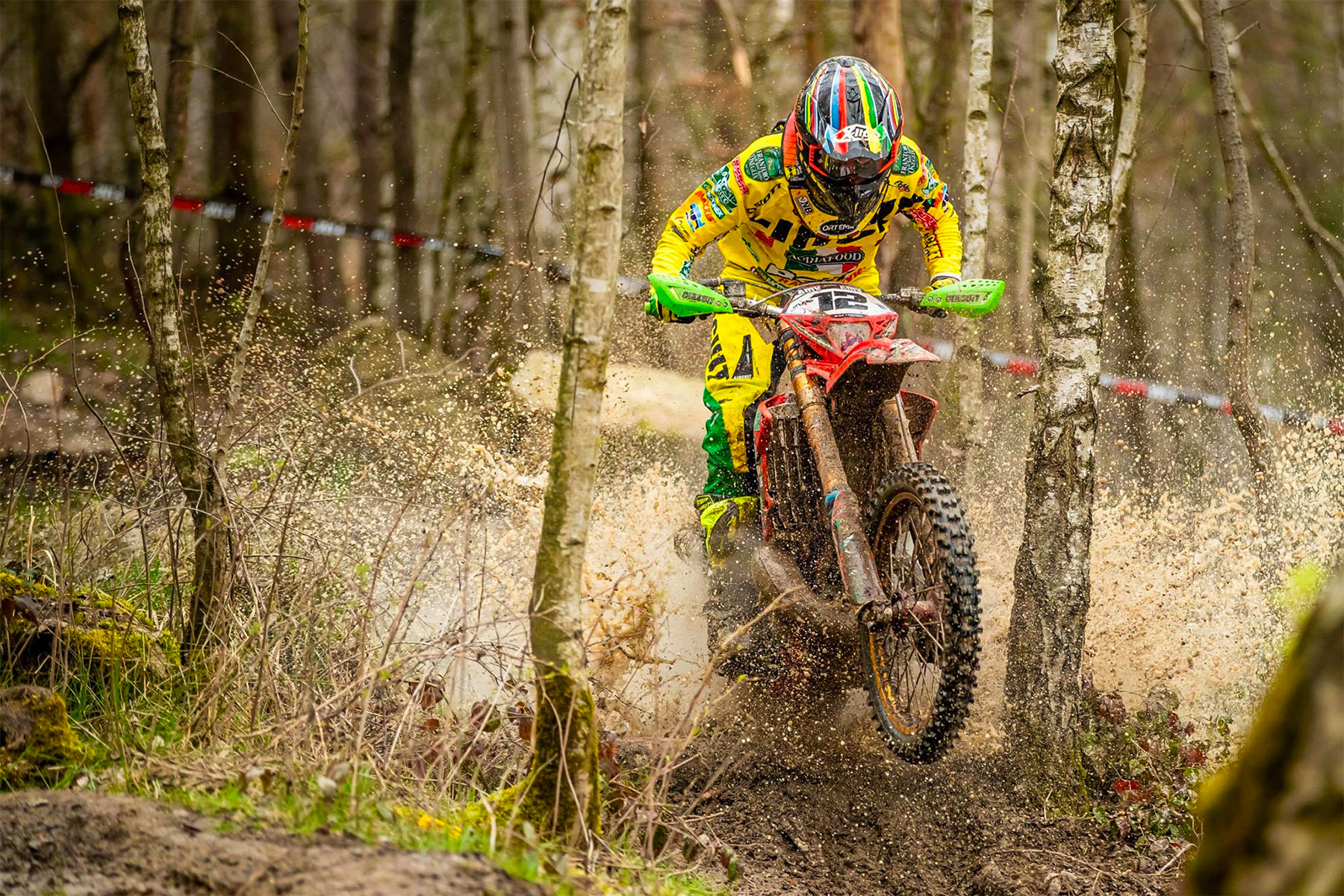 Brit Brad Freeman took second place. Photo: EnduroGP
LoÌøc Larreiu started the second day quicker than the first, the TM rider found podium rhythm. And he was putting a lot of pressure on Remes in the overall classification. Gradually LoÌøc slipped back behind Remes and Salvini. Still getting to grips with his new TM, Larreiu made a few errors and finished Sunday in 6th overall.

The day was punctuated by ups and downs for all the Honda riders. Davide Guarneri finished as the best red rider in 7th place overall, winning one special. Christophe Charlier was in excellent shape until a violent fall shook him up and relegated the Honda RedMoto rider to 13th position overall - a long way off his potential. Thomas Oldrati was steady and focused, finishing 8th on he day.

Gas Gas' Christophe Nambotin was the only big DNF on Day 2, after a strong performance on the opening day, the Gas Gas rider saw his race cut short by a gearbox failure. 'Nambot' was nevertheless satisfied with his form and felt ready to face the rest of the season. 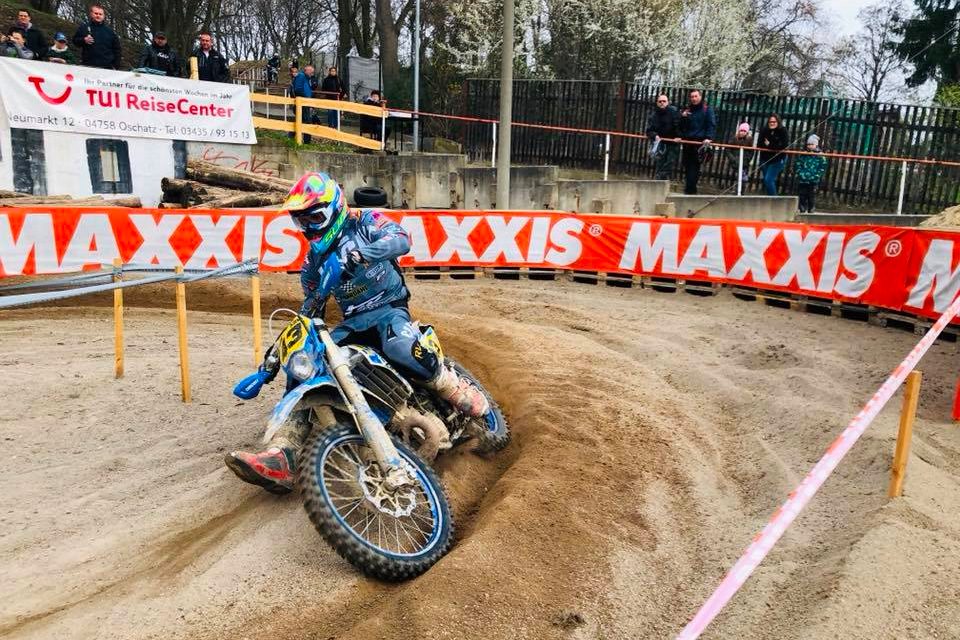 TM's Danny McCanney rounded out the podium.
In the E1 category, Brad Freeman confirmed his 2018 confidence has not wavered, and it was another victory for him ahead of Davide Guarneri and Thomas Oldrati.

The fight in E2 was intense between the three 'favorites' and it was Remes who eventually won ahead of Salvini and Larreiu, beating the Italian by just 0.16 seconds.

Holcombe took no prisoners in E3 and won the class ahead of McCanney and French Beta rider Anthony Geslin.

In the hotly contested Junior class, the surprise lay in the difficulties suffered by Andrea Verona early in the day.

The Italian's bike stopped in the first Cross Test and Andrea lost about 50 seconds and fell down to 7th position. But the 2018 Youth Cup Champion had the resources to keep his focus and fight back test by test.

After just six tests he was already back on the podium, about thirty seconds from the leader, Australian Wil Ruprecht . After overhauling Theo Espinasse for 2nd place, the factory TM rider went after Ruprecht, giving his all and taking the overall victory in the last special!

"This might be the most beautiful victory of my career so far," Verona said. "When I lost so much time this morning after the bike stopped in the Cross Test I knew I had the potential to win. My body hurts because I really attacked all day, but I'm super happy.‰Û