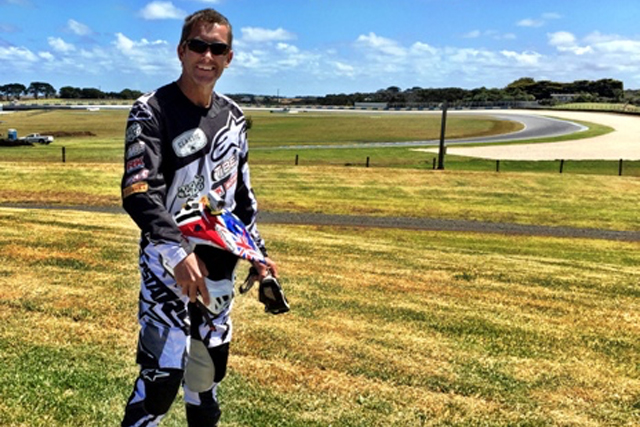 Following the announcement earlier this year that Troy Bayliss will bring his unique brand of flat track racing to the 2015 Pramac Australian Motorcycle Grand Prix, Bayliss has confirmed a stellar line up of riders for the inaugural event.

The Australian Motorcycle Finance Troy Bayliss Invitational GP presented by Motul, Pirelli & Shark Helmets will take place across the Australian MotoGP‰ã¢ weekend at Phillip Island, with practice on Friday followed by racing on both Saturday and Sunday.

"Everything is shaping up well for the Invitational GP, I would like to welcome all our sponsors and thank them for their support." Bayliss commented. "I'm very happy with the rider line up, Jared (Mees) and Jake Johnson from the States will be hard to beat while Joonas (Kylmakorpi) is very experienced also, especially on this size track; it‰Ûªs very similar to the layout from the Superprestigio.

"And don't discount the Aussies, all the big guns are ready to race in front of the large Australian Motorcycle Grand Prix crowd in October!

"Personally, I‰Ûªm looking forward to this event at the Island kicking off the first of three big events that include the Taree Classic in January 2016 and the Scramble in Brisbane in early March"

The event will lead the off-track entertainment line up at the 2015 Pramac Australian Motorcycle Grand Prix, and all ticket holders will be able to take in the action for free on the purpose built facility behind Lukey Heights.

The rider line up will be headlined by American import and current USA #1 ranked rider Jared Mees, who took out the 2015 Troy Bayliss Classic in Taree, NSW earlier this year.

"I am excited to make another trip to Australia to race some flat track during the MotoGP‰ã¢ and it‰Ûªs awesome to see flat track growing across the country." Mees said. "I'd like to say thanks to Troy Bayliss for the invite and his efforts into pumping flat track up and also to Brisbane Motorcycles in advance for the well prepared motorcycle, I can't wait to get to Melbourne!"

"Troy and his team have done an extraordinary job in securing the best international and local riders for the inaugural Australian Motorcycle Finance Troy Bayliss Invitational GP presented by Motul, Pirelli & Shark Helmets.

"Flat track racing has, for a long time, been an important breeding ground for future MotoGP‰ã¢ talent and it‰Ûªs going to be incredibly exciting to watch the world‰Ûªs best fighting it out for victory at Phillip Island in October.

"The purpose built track will generate some spectacular racing, and it‰Ûªs great that all MotoGP‰ã¢ ticket holders will be able gain access to the venue behind Lukey Heights to experience it firsthand."