Stauffer and Elliott Lead The Way in Practice At The Island 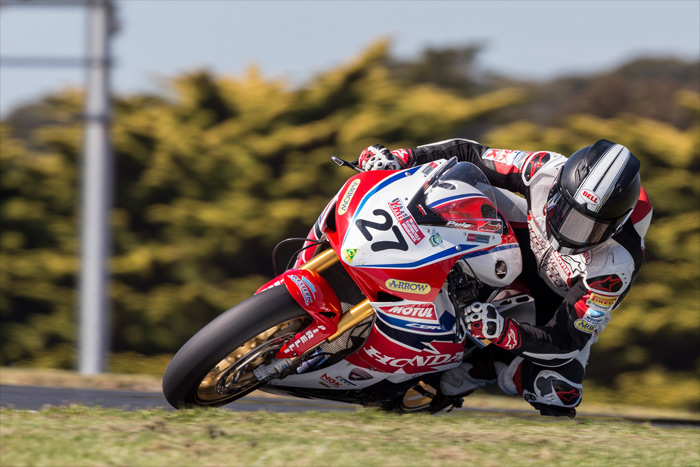 Beautiful conditions greeted teams and riders at Phillip Island for Practice at the final round of the 2015 Yamaha Motor Finance Australian Superbike Championship presented by Motul Pirelli.

In glorious sunshine, it was Team Honda Racing‰Ûªs Jamie Stauffer in the Superbike class, and Brayden Elliott (Hankook Tyres Australia) in the Supersport class that lead the way.

Team Honda Racing dominated the opening session at Phillip Island with Troy Herfoss (1:34.675) clocking the fastest time in the 20-minute session on the last of his 10 laps.

Teammate Staufer was the next fastest rider (1:34.834) ahead of new ASBK Champion Mike Jones (Australian Outdoor Living ‰ÛÒ Cube Racing Team) who managed a 1:35.356 on his Kawasaki.

The top-10 riders all recorded fastest lap times in their final two laps of the session, with Kiwi Ryan Hampton (Next Gen Motorsports) and Daniel Falzon (JD Racing) rounding out the top five times.

Session two saw a slight reshuffle of at the top with Stauffer clocking a 1:33.940, while Herfoss beat his opening session time with a 1:34.548.

Jones and Falzon were less than a second behind Hefoss‰Ûª time, with LMR Honda rider Linden Magee finishing the session fifth fastest.

Jones became the only other rider to break the 1:34.00 mark with a scorching 1:33.939 on his sixth lap of the session, with Herfoss rounding out the top three.

Falzon and Magee claimed top-five spots in the session.

Elliott came out on a mission in the opening session, and on lap eight of his nine laps clocked the fastest time of the session ‰ÛÒ a 1:37.872.

Elliott then took it to another level in the third session claiming a time of 1:37.459, while Burns signaled his intentions for the weekend posting the second fastest time of the day with a 1:38.099.

Victorian Matt Barton (CB Racing) claimed the fastest time across all sessions in the Moto 3 / 125GO class, despite a poor opening practice session.

Barton rode his Honda to the fastest time of the day in session three ‰ÛÒ his 1:44.481 just shading out the best time of Championship leader Brian Houghton (K1 Racing).

Tom Bramich had the third fastest time of the day, managing a 1:44.547 in the second practice session for the class.

Drew Sells (Race Centre) clocked the fastest time across the three Production practice sessions with a 1:55.745 in session two.

Series leader Justin Hall (The Boltbarn) and Robbie Menzies (Australian Outdoor Living) rounded out the top three ‰ÛÒ also posting their fastest times in the second session of the day.

In the Women‰Ûªs Production class it was Victorian Illish Ross (Chas Hern Racing) leading the way with a 1:57.129 in the final session, from sisters Michelle and Lara Marais (SP Racing).

Duncan Rogers and Warren Grubb (Ashburton Service Centre) were the fastest F1 duo in the class getting progressively faster throughout the day.

Victorians Ron Marten and Damien Edis posted the fastest F2 time with a 1:51.833 in the second session ‰ÛÒ the only session they competed in.

Twenty-three riders competed through practice in the Hartwell Rising Stars category, and it was Ryan Lawes (Ryan Lawes Plumbing & Gasfitting PL) who was the quickest with a 1:41.145 lap time.

Brook Coobs (Coombs Building & Construction) was over three seconds behind in second, with Ali Tajvar (Race Centre) rounding out the top three.

For a full list of results and information head to www.asbk.com.au