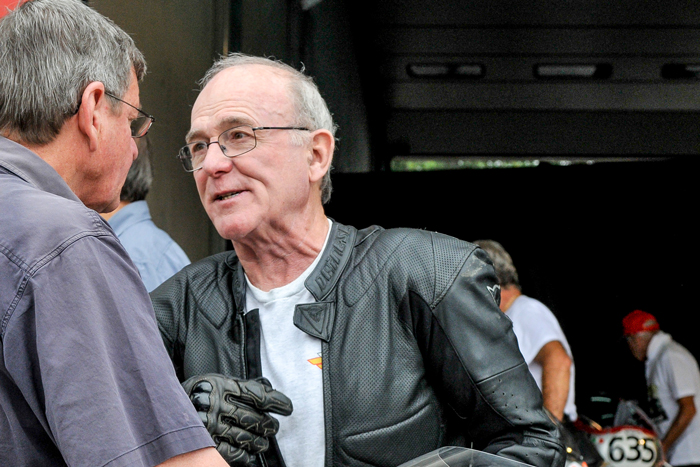 Normally it's just one distinguished visitor, but revellers at the 2016 AMCN International Island Classic historic motorcycle race meeting from January 22-24 are in for a treat with the chance to meet a quartet of special guests: former racer Paul Smart, chassis gurus Steve and Lester Harris, as well as David Hailwood, son of former nine-time world grand prix champion Mike Hailwood.

There‰Ûªll be several occasions to meet the four, with motorcycling guru Alan Cathcart interviewing them at the Friday night cocktail party for all teams on pit roof, the autograph signing sessions in the paddock and guest spots on commentary across the weekend..

Club Classic patrons will also be given an insight into their lives and motivations, with guests of the VIP pit roof facility being treated to interviews with the four, on both Saturday and Sunday.

Seventy-two-year-old Smart, the brother-in-law of the late Barry Sheene, was a GP rider in the early ‰Ûª70s on Yamahas, with best results of second places in the 250 and 350cc classes, but undoubtedly his most memorable body of work was claiming victory in the 1972 Imola 200 on Ducati's all-new 750cc racer, based on the GT750 road bike.

The win crystallised Ducati's appetite for racing success ‰ÛÓ which continues to this day ‰ÛÓ while Smart continued to compete for about another six years before retiring at 35 to concentrate on business and indulging in his passion for sailing.

Meanwhile, there are probably no more appropriate Island Classic visitors than Steve and Lester Harris, as all the UK front runners such as Jeremy McWilliams ride with chassis manufactured by the company they founded in 1972, Harris Performance Products (HPP).

Recently sold to Indian marque Royal Enfield, HPP has manufactured road and racing motorcycle chassis and frame kits for 43 years, with the company's creations having been used in both grand prix and world superbike competition. HPP even ran Suzuki's world superbike team for a couple of years in the ‰Ûª90s, with late Aussie Kirk McCarthy one of the riders.

HPP's Magnum chassis range is among its more iconic creations, while the brothers have probably solved, secretly, more handling woes for other manufacturers than they care to mention ‰ÛÓ and they may just spill the beans at Phillip Island‰Û_

Hailwood completes the special guests at the Island Classic, bringing to Australia a surname firmly linked to motorcycle racing royalty courtesy of his father, Mike Hailwood.

Mike was a genius on two wheels, some say the best over, when he won nine GP titles between 1961 and 1967, four in the premier 500cc class ‰ÛÓ a number only bettered by Australia's Mick Doohan and Italians Valentino Rossi and Giacomo Agostini.

It was in Australia where Mike made his motorcycle racing comeback after a short-lived car racing career, competing in events like the 1978 Castrol 6-Hour ‰ÛÓ the same year he made his historic return to the Isle of Man where he won the Formula One TT on a works Ducati. It was his 11th victory on the notorious circuit, with his 12th and final coming in the 1979 Senior TT.

Mike died in a car crash in 1981, which also claimed his daughter's life but saw David survive. David has inherited his dad's love of motorcycles and regularly attends and organises events keeping Mike's name alive.