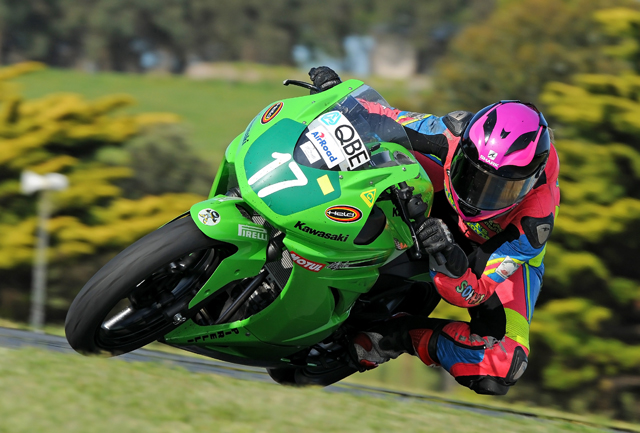 Kawasaki‰Ûªs Sophie Lovett has won the 2013 ASBK Women‰Ûªs 250cc Production Class Championship on board her Ninja 250R while Sean Condon took out Pro Stock round honours on his Ninja ZX-10R at the final round of the 2013 Australian Superbike Championship at Phillip Island, Victoria over the weekend.

Sophie Lovett rode extremely well at Phillip Island to clinch the Australian Women‰Ûªs Championship. With 10th and 6th place results in races 1 and 2, Lovett came out firing in the 3rd and final race to post the fastest lap time outright and come home in 2nd place overall for the race.

Her 10-6-2 results were good enough for 5th outright for the round and handed her the Women‰Ûªs championship. Lovett finished the outright championship in 4th overall with Kawasaki riders Brandon Demmery, Luke Burgess and Tom Bramich taking 1st, 2nd and 3rd places respectively on their Ninja 250Rs.

Lovett also competed in the Pro Stock class at Phillip Island where she came away with 8-7-6 results for 6th overall for the round and 8th in the championship.

‰ÛÏI‰Ûªm bloody excited to win the women‰Ûªs championship Lovett stated. "I feel like I‰Ûªm floating on a cloud and just so happy.

Kawasaki‰Ûªs Sean Condon finished off an injury hampered year in style by winning 2 races at Phillip Island on his way to winning the Pro Stock class for the round on board his Bikebiz Kawasaki Ninja ZX-10R. Condon posted 1-1-4 results to win the round. He finished the championship in 4th place.

Sean Condon was joined on the Pro Stock podium by Kawasaki rider Phil Lovett (5-3-2) who finished the round in 3rd place.

The Kawasaki Ninja ZX-10R was clearly the dominant bike in the 2013 ASBK Pro Stock championship winning Kawasaki the Manufacturers Championship by a massive 1,265 points over its closest rival.

Kawasaki riders claimed 4 of the top 5 positions in the series with Matt Walters taking the overall, Dustin Goldsmith in 3rd, Sean Condon in 4th and Phil Lovett in 5th places.