Solid test for Honda Racing ahead of the North West 200 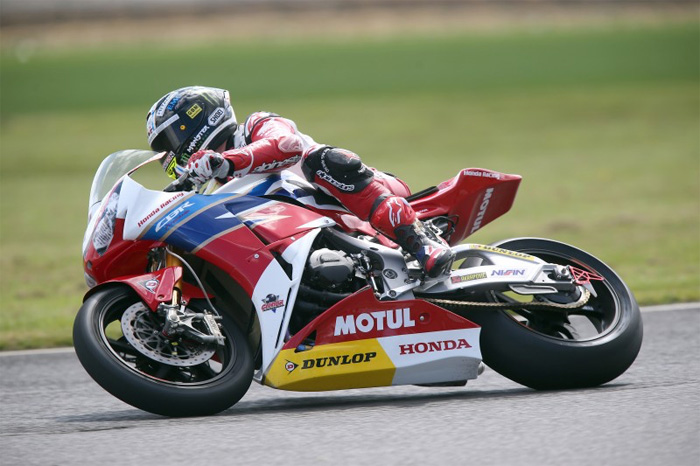 With the North West 200 and Isle of Man TT road races fast approaching, Honda Racing‰Ûªs John McGuinness and Conor Cummins have been in action this week with a two-day test at Castle Combe in Wiltshire, in preparation for the start of their road-racing season.

The first day of the test saw the Honda squad greeted with mixed weather conditions, but in-between the snow and rain showers the team were able to gain good track time. Wednesday saw a full day on track, where McGuinness and Cummins were able to try different settings on their Honda CBR1000RR Fireblade SP machines.

Working closely with Dunlop throughout the two days both riders tested different tyre compounds, electronics and suspension options to fine-tune settings for the forthcoming North West 200 (10-14 May).

"We have again enjoyed an excellent two-day test at Castle Combe; we have been very lucky with the weather conditions as generally there has been a lot of rain in the area and on the last day, we saw the rain clouds come over, but thankfully went past us." Team Manager Neil Tuxworth reflected.

"We‰Ûªve had enough dry time over the days to complete a series of tests on various items, to both improve and develop our machines for the forthcoming North West 200 and Isle of Man TT races, and I am pleased to say that both John and Conor have been very happy with the outcome of this test and we‰Ûªre all looking forward now to the North West.

The Castle Combe outing is one of many official Honda tests this year that has seen McGuinness reunited with his 2015 Senior TT winning Fireblade and the circuit gives a good direction for road racing tests, due to its bumpy nature. The ‰Û÷Morecambe Missile‰Ûª proved he is still the man to beat at the TT on the CBR, after smashing the outright Senior lap record with an 132.701mph lap last year.

"It has been a really solid test this week we had a few things to work through, which we managed and it‰Ûªs all been really positive." McGuinness said. "It‰Ûªs the same CBR I love and adore, but we can‰Ûªt stand still as the competition is really strong so we have to make a few small changes here and there so we‰Ûªre ready.

"I‰Ûªm feeling great at the moment and I‰Ûªve been faster here than ever before, so feeling really confident. I‰Ûªve got a great package with the team, the CBR and there‰Ûªs no reason not to bring any trophies home this year. We‰Ûªve worked closely with Dunlop and they brought a new tyre for us to test, which was a massive step so I‰Ûªm hugely confident in what they‰Ûªre offering.

"I‰Ûªm leaving here in a good place and can‰Ûªt wait to get going now at the North West!

Team-mate Cummins enjoyed being back aboard his Fireblade working through different settings and had consistent lap times at the 1.85-mile circuit. The Manxman has enjoyed previous success at the North West 200, where in 2014 he was on the Superbike podium and hopes to be again this year.

"I‰Ûªve really enjoyed the last two days and being back on the Fireblade again, it‰Ûªs a great bike and always brings a smile to my face." Cummins commented. "We had quite a bit to work through over the test with different settings for the electronics, engine and also the suspension but I‰Ûªm leaving here quietly confident with what we‰Ûªve achieved, and just can‰Ûªt wait to get racing now.

"I‰Ûªm in a happy state of mind and confident in the package for this year; I‰Ûªve got a great team behind me and a fantastic machine, so I can‰Ûªt ask for anymore. We‰Ûªve also worked with Dunlop over the days and testing numerous tyre compounds and I am full of confidence with what they‰Ûªre offering.

The 2016 North West 200 takes place in two weeks time on 10-14 May, which sees McGuinness and Cummins competing for Honda Racing in the two Superbike races on Saturday 14 May. The NW200 is one of the world‰Ûªs fastest road races and the 8.970-mile course forms a triangle between the Northern Irish coastal towns of Coleraine, Portrush and Portstewart.