Heartbreak For Miller out With Hand Injury On Day One 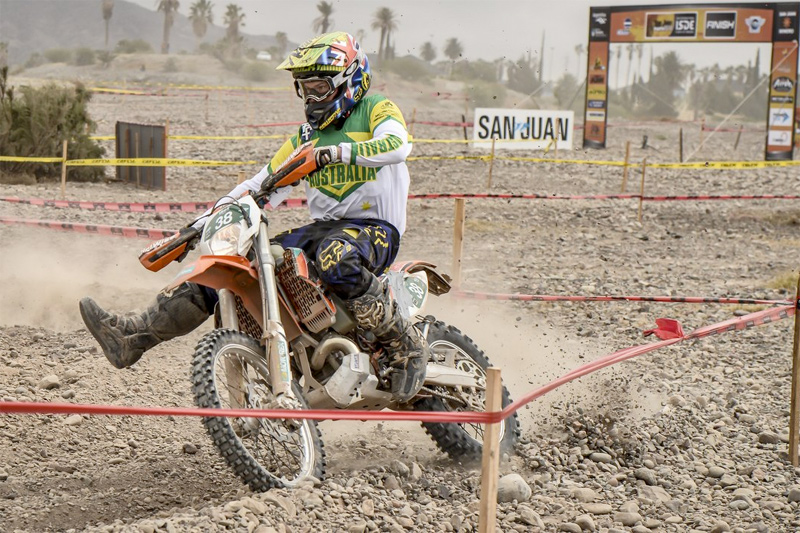 All three Australian ISDE Trophy teams have taken a step in the right direction at the opening day of the 2014 International Six Day Enduro being held in Argentina.

Bewley was strong aboard his Husqvarna, finishing 9th in class for the day. Recently crowned World E3 champion Matthew Phillips continues his impressive form finished 2nd for the day in the E2 class, with Strang not far behind in 9th and Green a few more seconds back in 13th.

Unfortunatley for our fourth Senior rider in the E2 class, Daniel Milner, his event came to a sudden end when he smashed his hand between a rock and his handle bar crushing his little finger and putting him out of the event.

"So it's only just started and it has ended for me already!" Milner posted on his facebook account. "Went down hard in the 3rd test and crushed my finger in between the bars and the rocks.

"Sorry to everyone that has supported me and hoping the Aussie boys can get it done with one less rider."

The Only Australian Senior Trophy team member in the E3 class Toby Price lead home the class by over 12 seconds.

While our senior team impressed our Junior Trophy line up once again showed the future of Australian Enduro racing is in great hands. Most impressive was the team's youngest member in Daniel Sanders, finishing 7th in the E3, one position ahead of team-mate Lachlan Stanford, while Tom McCormack and Scott Keegan ensured the Aussies would lead the Junior class at the end of the opening day finishing 14th and 23rd respectivley in the E2 class.

The Junior team holds a handy 30 second lead over France with Sweden a further 30 seconds behind in 3rd position.

Maybe the most impressive performance from team Australian came from our Women's Trophy team. The team comprising of Jessica Gardiner, Jemma Wilson and Tayla Jones more than showed that they were our to defend their 2013 title, leading home the class by a whopping 5 minutes over team U.S.A.

Gardiner lead the day overall, finishing three minutes ahead of Wilson in second, while Jones who won the opening test suffered a mechanical issue at the end of the day, but was able to cross the finish line to concluded the day and will continue racing when day two gets underway in a few short hours time.

Top Image: Daniel Sanders impressed on the way to leading Australia's Junior Trophy team to the lead on day one