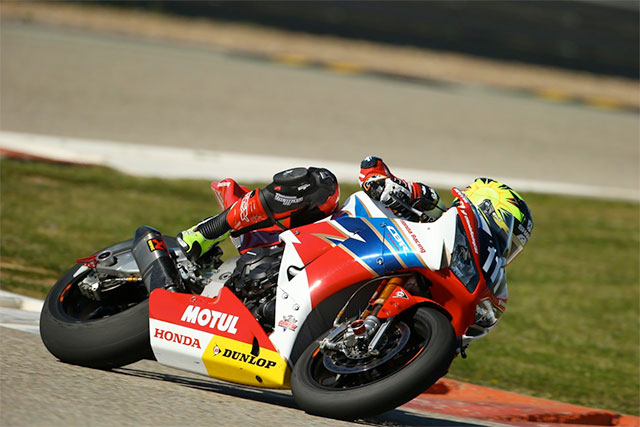 The Honda Endurance Racing team kicked off its 2016 campaign this week with a four day test at Monteblanco in Spain, sharing the experience with the extended Honda Racing family with 12 Fireblades on track, from British Superbike, road racing and Superstock classes.

The team focused on race simulations, to ensure the Fireblade has a good set-up that suits all three riders and can give consistency with all their lap times. The super-slick crew also worked on pit stops, something the Honda team is known for with their efficiency and speed.

The riders have been working and pushing hard with their laps, but unfortunately during the second day of the test da Costa suffered a highside. The French rider was left with no injuries following his fall but it proved good practice for the team, who made a quick repair to the CBR and were back on track quickly to continue the test.

"We‰Ûªve had a great test this week at Monteblanco; it‰Ûªs a great circuit that all the riders enjoy riding at and it suits the Fireblade well to get a good setting for the season ahead. It‰Ûªs also been good to have the other Honda teams with us too across the different championships," Team Manager, Neil Tuxworth said.

"The crew over the winter has worked hard on the CBR and the work has certainly paid off with the feedback we have received from Freddy, Julien and SÌ©bastien. Unfortunately Julien took a tumble on the second day, but thankfully was unhurt, and proved good practice for the team repairing the CBR and getting back out again quickly. We leave Monteblanco with three happy riders, who are all confident in the package we have for the 2016 season and are now all eager to get going at Le Mans for the test at the end of the month."

In-between time on track the Honda Endurance Racing team also rolled out its 2016 livery on the EWC machine, which features the red, blue and white colours associated with the team, with gold highlights across the side fairing and tank.

" We are so happy with how the test has gone this week; we were blessed with sunshine from the afternoon of the first day so we have been able to test a lot of new settings on the CBR," Freddy Foray said.

"We‰Ûªve made good changes to the suspension and have worked closely with Dunlop with our tyre selection. We now wait until the Le Mans test at the end of the month to compare the settings ahead of the first round. The Fireblade is feeling great, the crew has worked a lot over the winter and we‰Ûªre happy with the changes. We are all looking forward to Le Mans and I can‰Ûªt wait to race again," the Frenchman concluded.

The Honda Endurance Racing team leaves Monteblanco excited with the start of the 2016 season just around the corner, with the Le Mans pre-season test on 29-30 March and the first round of the season, the 24-Heures Moto on 10-11 April.