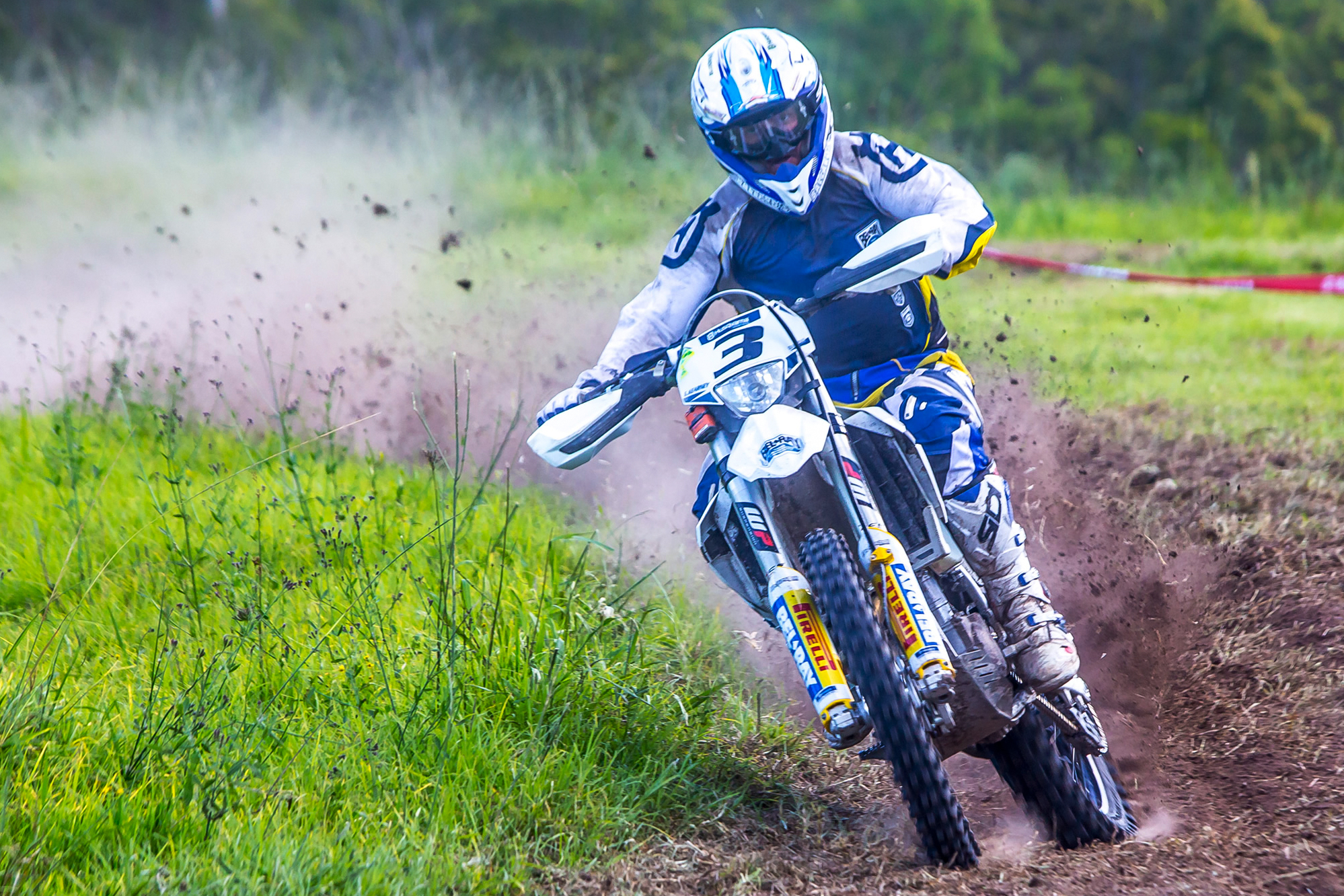 Team Manager Glenn Kearney expressed his confidence in his squad's ability to bring home the bacon prior to Bulahdelah, and the Husqvarna Enduro Racing Team did exactly that, as the 2014 Australian Off-Road Championships burst into life this weekend.

Despite its status as the youngest factory team in the championship, the Husqvarna men‰Ûªs haul numbered six class podiums and a outright podium in a very solid start to Australia's premier off-road racing championship.

Kearney himself led the way on Saturday, powering his Husqvarna FE 501 to E3 class victory and a masterful third outright behind a dominant Toby Price. Kearney was second in class Sunday after a costly mistake, but leads the AORC E3 championship after two rounds.

‰ÛÏSaturday was fantastic, I was third outright and won the class and the boys went great." Kearney explained. "The results showed good promise, and good speed from all of us, but today‰Ûªs conditions were tougher, with silty hills and a lot of rocks. It was fairly dangerous and there were a few big crashes.

"I had one on Saturday afternoon but I was lucky it didn't cost me much. Sunday though, I made a big mistake in the third race and it cost me 20 seconds. I was second in E2.

"Overall though, it was a great first round for us." Kearney who also manages the team continued. "The team worked well together and everything ran fairly smoothly, the wives and girlfriends really made for a smooth weekend.

"One positive to come out of the rough conditions today was that I got the chance to work on my suspension setting for choppy tracks, and finishing second outright on the last lap shows the changes we were making were in the right direction," he concluded. 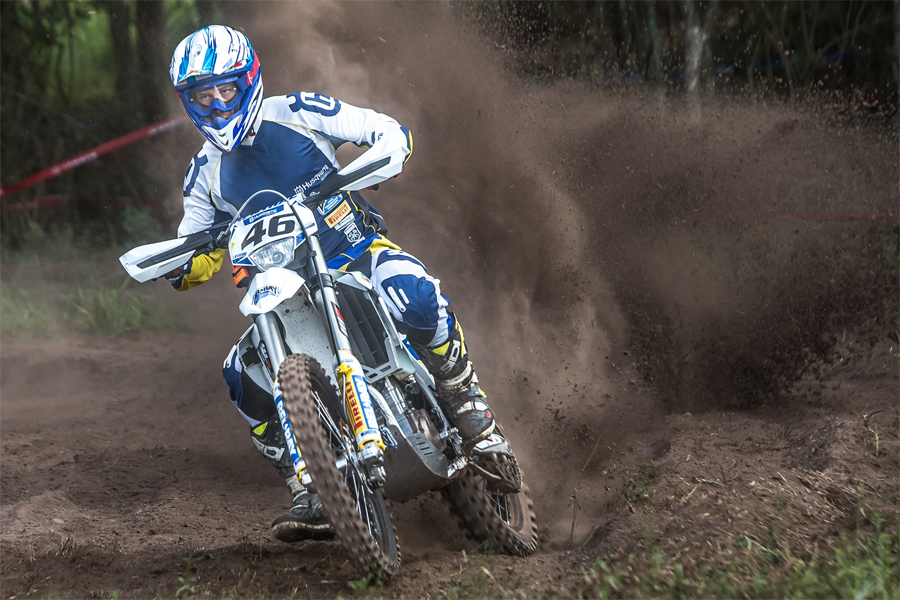 Lachlan Stanford had a strong opening round on Saturday finishing 5th outright - Credit: Fourohfour
Just behind Kearney in outright classification at round one was Husqvarna FE 450-mounted Lachy Stanford, with a very strong showing in fifth outrigh. Stanford then finished fifth at round two on Sunday in E2 after struggling with suspension settings as the course chopped out.

‰ÛÏThis weekend was okay. The track was pretty rough and dusty and third Overall Saturday should get me close to a top-five position which is where I want to be." Stanford said.

"The E2 class is pretty stacked with talent but I think I can still do better, if I spend more time on the bike during the week - I think that will help me be faster for the next one.

"Day one was definitely a big bore track - the FE 450 just hauls up the powdery hills. Sunday's on the rough track I struggled with setup a little bit and got eighth Overall. We changed things a bit and the last couple were better, but not enough to get me back up there.‰Û 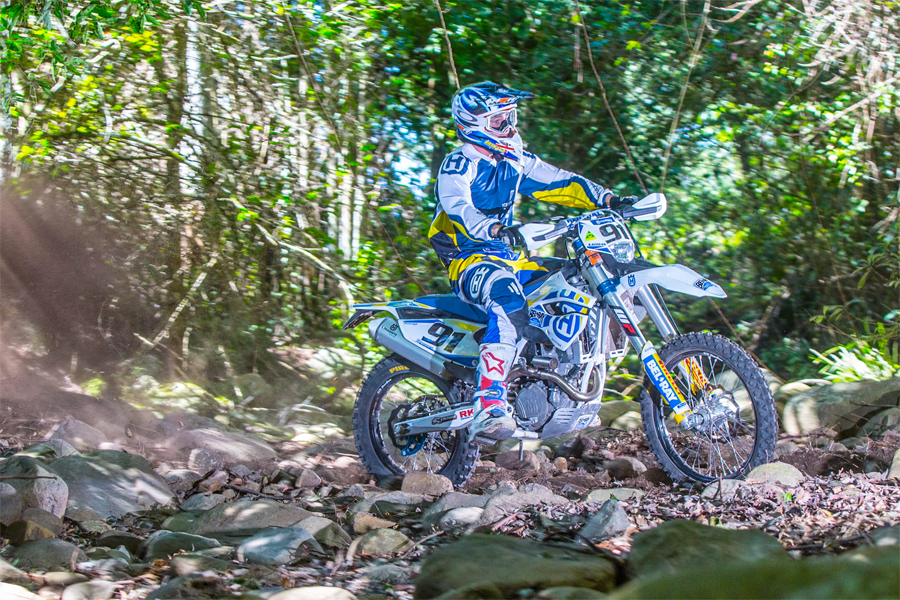 Scott Keegan battled through the pain of a hand injury sustained on day one to post some solid results over the weekend - Credit: Fourohfour
Scott Keegan suffered a hand injury after clipping a tree but with teeth gritted pushed on to post second then third in the E1 class while evergreen Damian Smith rebounded from last weekend's knee injury to post back-to-back wins in the Vets class on his Husqvarna FE 350.

‰ÛÏI had a few dramas Saturday, it started off really good in the first sprints with a win but I maybe got a little overconfident and hit a tree on the clutch side which split the webbing between my fingers." Keegan explained. "It needs some stitches. I taped my fingers together and just tried to make it through.

"Sunday I was third after a couple of dramas; I had some bad fuel which cost me some time and dropped me down the overall order to third in class. I'm happy with the two podiums from the weekend and the new bike is more than capable.

"It was a decent start to the championship if not the outright. Glenn‰Ûªs advice was really helpful, apart from where he advised me to superglue my hand up Sunday!" Keegan concluded.

Top Image: Glenn Kearney got his 2014 AORC Championship off to a positive start with a outright podium at round one.
Credit: Fourohfour