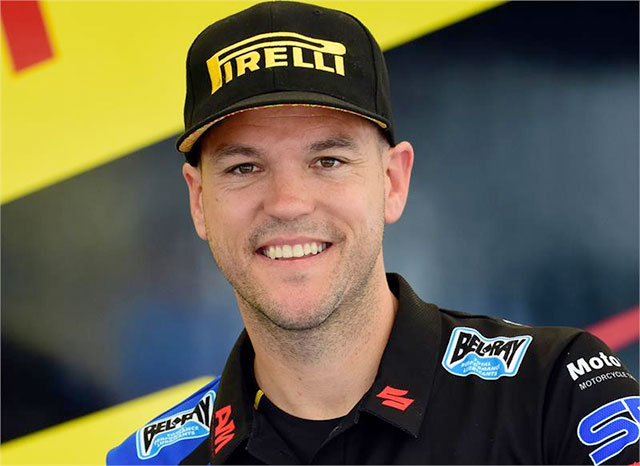 Suzuki‰Ûªs Sloan Frost raced to victory in the New Zealand Superbike Championship at Sunday‰Ûªs fourth and final round at Hampton Downs, as Suzuki GSX-R1000s filled the top four positions in the series.

MC2 Fujitsu TSS Red Baron Suzuki rider Frost, a refrigeration engineer from Wellington, topped the qualification charts and then, protecting his 43-point lead over his nearest rival John Ross (Suzuki), he settled for a solid third in the first race on Saturday; a result that extended his series lead to 48 points. He then won the second race on Sunday morning, but he had to work hard for it:

"I was behind Scotty Moir (Suzuki) for the first three-quarters of the race, he got away at the start and was riding really fast. I think it took me a couple of laps to relax. Then I started to flow, saw where I faster than him and passed for the lead and that was that," Frost said.

With that win, Frost was now more than 50 points in front for the championship and the New Zealand Superbike crown was his. Even though the title was in the bag, the next race was important too because it was also for the separate Tourist Trophy title, but, with the pressure gone, he seemed untroubled in taking that win also.

Frost's score-card for the weekend was an impressive 3-1-1-1, giving him a tally of nine wins for the 12-race championship, his worst result being three third placings.

And while Frost was the epitome of chilled, he was nearly beaten in the coolness stakes at the weekend by Andrew Stroud: The 48-year-old nine-time former national Superbike Champion was nothing short of sensational at Hampton Downs during Saturday's first phase of action and his performance surprised even himself.

Stroud crashed his Suzuki GSX-R1000 at 220kmph during a practice session on Friday. Thankfully, the father-of-10 escaped virtually unscathed, but his bike was declared a write-off. He and his mechanic burned the midnight oil to completely rebuild the bike from the ground up, swapping the frame and replacing all the broken bits, but there was still no sign of him or his bike when the first practice session was underway at the track on Saturday and he drove into the pits just as the Superbikes were coming off the track at the end of that session.

Stroud also nearly didn't make it in time going out onto the track for official qualifying sessions and was grateful just to survive that, eventually qualifying a lacklustre eighth. But the best was yet to come and Stroud raced to a convincing win in the sole Superbike Championship race on Saturday, and that result enough to boost him from third to second in the championship standings.

Despite a difficult second day of racing on Sunday, Stroud still managed to finish 6-3-2 and cemented his position in the overall runner-up position, relegating Ross to third in the championship in an impressive 1-2-3 Suzuki podium for the class, with yet another Suzuki rider, Moir taking fourth place overall.