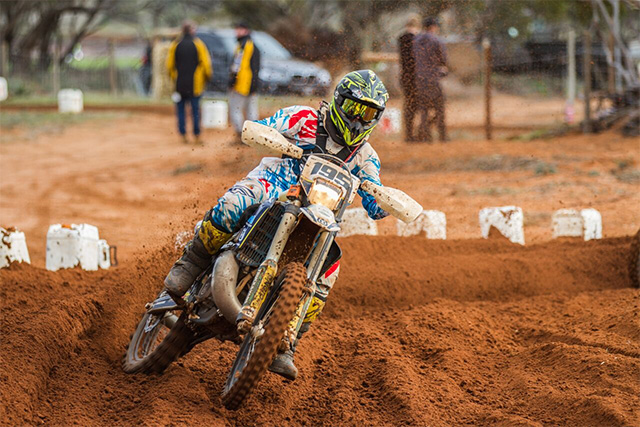 The annual pilgrimage to Hattah was on again over the 2nd weekend of July.

Entry numbers were up and so were the results for the Simford Welding Husqvarna Race Team. The size of the team is ever-growing and is arguably the most rounded and diverse team in the pits.

It‰Ûªs presence and professionalism in the pit area and on track is as good as any factory team, not to mention the entourage of family and friends that go along to support the racers and team.

The juniors were first to hit the track on Saturday in near perfect conditions. Team mates Oscar Harris and Lachy Roche were involved in a race long battle on their Husqvarna TC65‰Ûªs. Ultimately it was Lachy who took line honours and secured 3rd place in the 7-U9 65cc class. An excited Lachy went on to mention how much fun it was "racing his mate‰Û 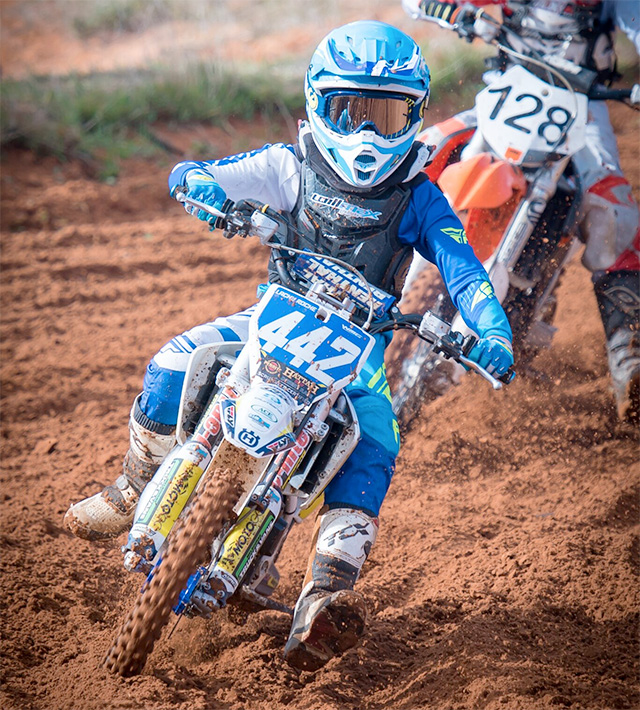 Lachy Roche charging home in 3rd place in the Juniors
Notable performances from the other juniors in the team were seen from Ethan Kienhuis and Matt Kapoglis on the TC85 and Riley Sheehan TC125 and Bryce Baschera.

That was only the beginning of what was to follow on the Sunday in the senior race. New recruit Josh Murtagh had an unbelievable run to secure a top ten outright position and will run the number 9 plate for the 2018 event. Josh ran at the pointy end of the field for the 4 hour race after qualifying well on Saturday. 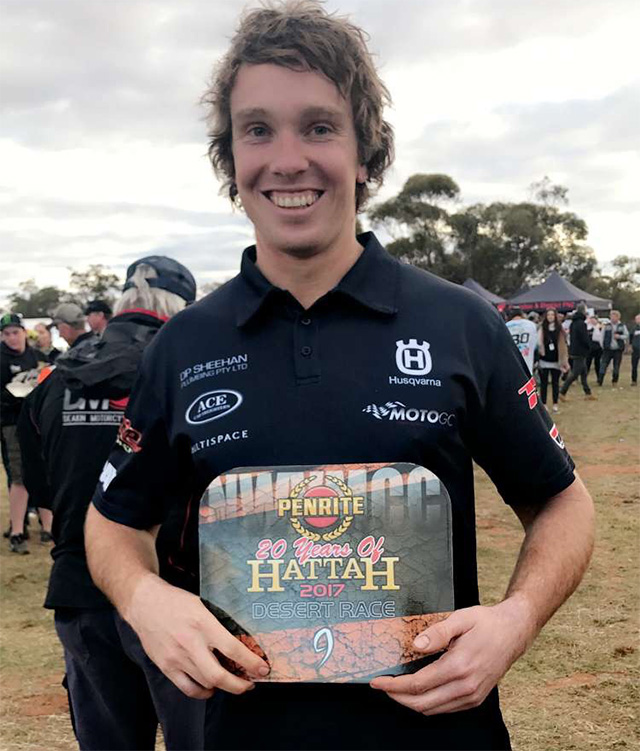 Josh Murtagh secured the number 9 plate for 2018
Also new to the team was Wyatt Fogarty. Wyatt‰Ûªs migration from motocross was flawless as he powered his Husqvarna FC250 to the top step of the podium and blew away the competition in the quarter liter class finishing a very impressive 18th outright. Not only proving his own speed but also the reliability of the bike having the bike screaming for 4 hours in an unfair advantage to the bigger 450‰Ûªs and 500 power plants. ‰ÛÏI only jumped on this bike a month ago, and felt at home straight away, I can‰Ûªt thank Rochey and Joel (Stafford) enough for the opportunity to get this ride"

More podiums were still to come Sunday in the form of Kyle Simpson in the up to 250 2/S class. Hot off his impressive Finke result, the young gun proved he has the speed and his Finke result was no fluke on his Husqvarna TE250. Still only fresh out of juniors with plenty of growing still to come Kyle is well on his way to establishing himself as a future desert champion.

Not to be outdone, Anthony Venn also made his way to the last step on the podium in the 251 & Over 2/S on his Husqvarna TE300. ‰ÛÏI had a couple of issues with the bike at the half way mark, but we managed to overcome that and get the job done. I can‰Ûªt thank the pit crew enough‰Û 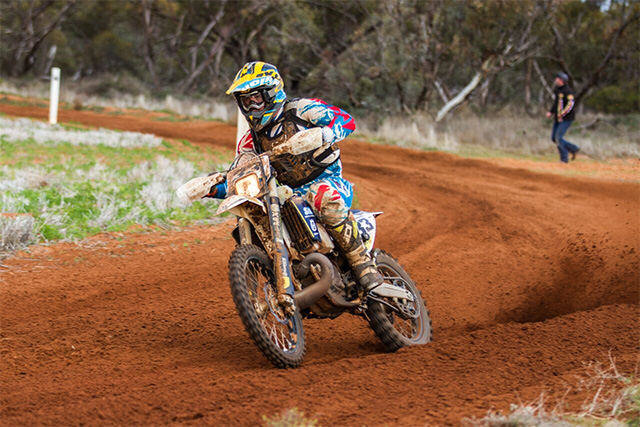 Anthony Venn on a charge in the up to 300cc 2 stroke class
It wasn‰Ûªt all podiums for the team, there were honorable rides from Breanna Simpson and Kelly Cantanese in the women‰Ûªs class and Dave Murray and Jordan Stewart still charging hard at the end of the grueling 4hour race

One thing unique to the race team is its training facility in Barooga on the NSW border. Team manager Paul Roche stated ‰ÛÏOur training track in Barooga is paying dividends with the quality of riders utilising the venue. We have had World Champions like Daniel Sanders train there and teach our juniors how to ride the sand. We are so lucky to have such a venue to train on in the lead up to the major desert races like Finke and Hattah" 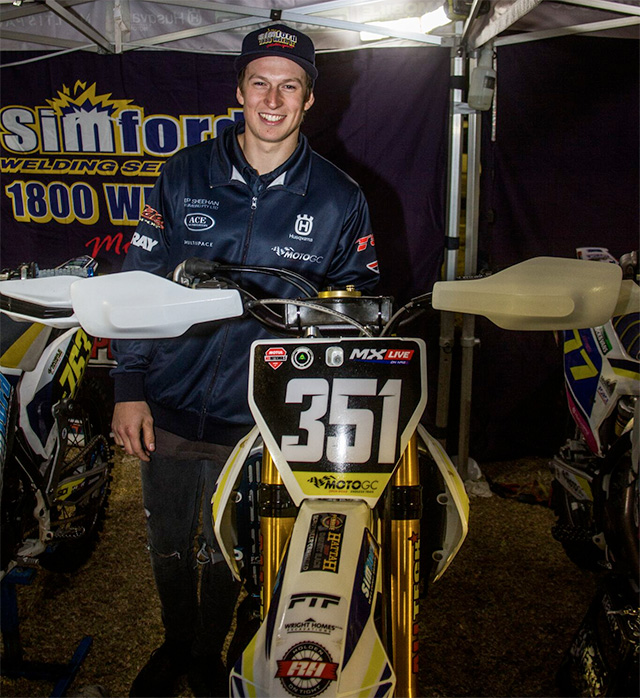 Wyatt‰Ûªs Fogarty's migration from motocross was flawless as he powered his Husqvarna FC250 to the top step of the podium and blew away the competition in the quarter litre class finishing a very impressive 18th outright.
Team owner Joel Stafford is also impressed how the riders are developing and pushing each other. ‰ÛÏWe have some plans in place for next year and really want to be going for outright podiums in the not too distant future‰Û 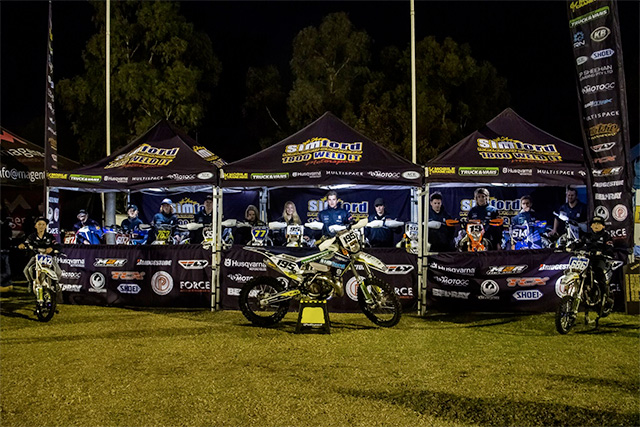