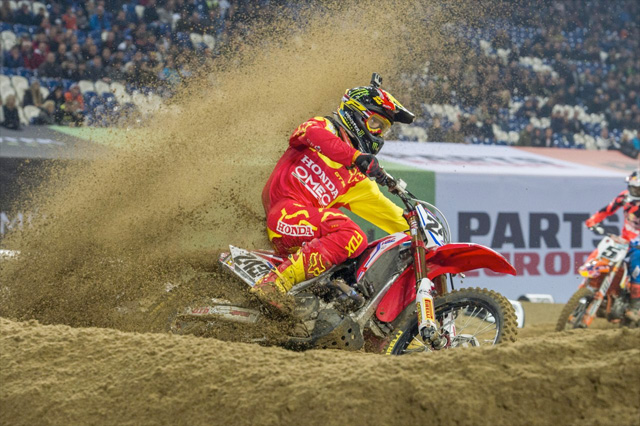 It‰Ûªs been a difficult end to what has been a stellar season for rookie MXGP World Champion Tim Gajser.

His MXGP season was remarkable and he smashed records on his way to becoming the first back-to-back champion in the MXGP and MX2 era, but since wrapping up the title in the United States, he‰Ûªs had more of a tough time of things.

The 20-year-old Slovenian bounced back for the SMX Riders‰Ûª and Manufacturers‰Ûª Cup on Saturday 8 October, and proved he‰Ûªd lost none of his speed. Racing for the first time aboard the all-new 2017 Honda CRF450RW, he set the fastest time in the pole shootout, took the holeshot, win and fastest lap in the opening race, and again surged into the lead of race two.

Three laps from the end of race two, however, a crash on the back section of the track inside the Veltins Arena put Tim down hard again on the already weakened right shoulder. He was able to finish the race, albeit a lap down and in visible pain.

After a little rest before race three he steeled himself in true Gajser style and decided to push on and race. Starting well, as the race progressed the Slovenian uncharacteristically slid backwards from second to fifth, demonstrating the pain he was enduring.

‰ÛÏI feel so bad that I can‰Ûªt go to the Monster Energy Cup this year because it‰Ûªs no secret that I want to race against the best in the world in America and I was really looking forward to it." Gasjer commented. "I showed at the start of SMX that I am fast also in this mix of motocross and supercross and I think it would have been a great battle this weekend in Las Vegas, but there is too much risk with the injury in my shoulder.

"It was so painful at SMX, and even though we raced in the final race I wasn‰Ûªt fighting ‰ÛÒ I was letting people pass when they caught me because I didn‰Ûªt want to have any contact in my shoulder or push harder and make it worse. I was holding on, and this is no way to go to race something as important as Monster Energy Cup.

‰ÛÏWhen you are scared of making an injury worse, that‰Ûªs no way to race, so it was a very hard decision to make but we know it is the right one." Gasjer continued. "So I‰Ûªm sorry for the fans and the sponsors like Monster and Fox that I can‰Ûªt race out there, but there is always next year and I think it‰Ûªs important for everyone that we do it properly with the best chance of winning.

"It‰Ûªs been an unbelievable season this year taking the MXGP title, and for that I want to thank everyone with me for all their support. But it‰Ûªs also been a long season so now we need to take some time and make sure we go into 2017 stronger than ever.

"So I wish everyone the best for racing this weekend and I‰Ûªll be watching, and ready to come out there next year and give it my best.‰Û