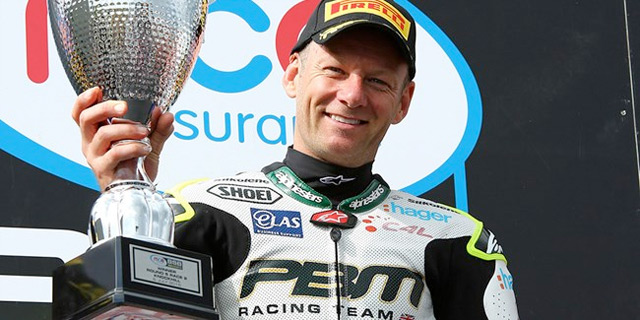 Stuart Easton had taken the initial lead on the opening lap as he bid for success at his home round, but Byrne was instantly on the attack and took the lead at the Hairpin for the first time. On the opening lap Filip Backlund had crashed out and with debris on the track the Nissan GT-R Safety Car was deployed and the pack bunched up behind ready for a restart three laps later.

When the race resumed Byrne held his advantage but Easton was pushing for a move, meanwhile the race was over early for Dan Linfoot when he crashed his Honda Racing Fireblade at turn seven without injury.

The Australian contenders began to scrap over the opening laps with Jason O'Halloran on the second Honda Racing machine and Josh Brookes switching positions, with the Milwaukee Yamaha rider holding the advantage.

The pair were trying to edge away from the chasing pack including James Ellison and Ryuichi Kiyonari, but the pair crashed out in separate incidents at turn seven with both riders able to walk away from the incidents.

Michael Laverty was then closing down on the leading four riders onboard his Tyco BMW and he made a move on O'Halloran with ten laps remaining at the Hairpin and then had Brookes in his sights. The Tyco BMW rider was shadowing Brookes and then went for a move up the inside at the Hairpin a few laps later and then was targeting the PBM Kawasakis ahead of him.

Laverty made a move on Easton with three laps remaining and held the position, but didn't have enough to close down Byrne, but held off Easton to score his first podium finish of the season ahead of the Scot in third.

Race-winner Byrne said: "That was a tough race - I envisaged it would be a harder pace and I was desperate to stay in front, riding my own rhythm and not following anyone. I pushed when I was at the front but a few times felt a bit on the edge. I saw where Stuart was and over the last couple of laps pushed on to keep ahead. I enjoy the intensity of racing here - you can't give a tenth away with these guys breathing down your neck, so I enjoy the challenge."

Brookes held fourth ahead of O'Halloran with Danny Buchan who scored his best result of the season in sixth on the lone Be Wiser Kawasaki with Tommy Bridewell and Luke Mossey back inside the top ten. James Ellison and Peter Hickman had a race-long battle to complete the top ten.

Shane 'Shakey' Byrne celebrated a Scottish double at Knockhill, holding off the challenges from his PBM Kawasaki team-mate Stuart Easton and hard-charging Josh Brookes in an 11-lap sprint race ahead of the next round of the season at his home circuit of Brands Hatch.

The race initially got underway with Michael Laverty leaping off the line to lead the pack into the first corner on the opening lap ahead of James Ellison, Easton, Byrne and Brookes. Ellison onboard the JG Speedfit Kawasaki was determined to make amends for his crash in race one and went for a move on Laverty at turn three, but ran wide and onto the grass which he managed to hold upright and rejoin further down the field.

Laverty was still holding his position at the front of the field from Easton and Byrne as they took advantage of Ellison's mistake. However there was disappointment for the second Tyco BMW as Tommy Bridewell crashed out unhurt at turn three on the fifth lap.

By the start of the ninth lap Byrne and Brookes had moved ahead of Easton after he ran wide at the Hairpin to then target Laverty for the lead. However the Scot wasn't prepared to hold station and he made a move again on Brookes at the Hairpin to move back to third on the twelfth lap.

Byrne was trying to force Laverty into making a mistake, which he did at the Hairpin a few laps later, giving the defending champion the lead by the start of the 17th lap. Byrne was holding off Laverty, Easton and Brookes but then the race was red flagged as rain began to fall.

The passing shower was short lived though and after an interlude the race restarted in dry conditions and Byrne was focused on hitting the front and setting the pace. The PBM Kawasaki rider did just that ahead of Easton and Brookes who went on to complete the podium after the 11 lap sprint race.

There was disappointment for Ellison on the restart as he was forced to retire his JG Speedfit Kawasaki, dropping a place in the standings in the process ahead of Brands Hatch. Luke Mossey had put in an impressive performance in his rookie season to be running fourth but the Quattro Plant Kawasaki rider crashed out on the penultimate lap at turn two unhurt.

Mossey's crash elevated Ryuichi Kiyonari to fourth on the Buildbase BMW pushing him inside the top ten in the standings now as he held off Jason O'Halloran on the leading Honda Racing machine who completed the top five.

Laverty had dropped to sixth place in the closing stages of the race for Tyco BMW whilst James Westmoreland, Peter Hickman and Christian Iddon completed the top ten.