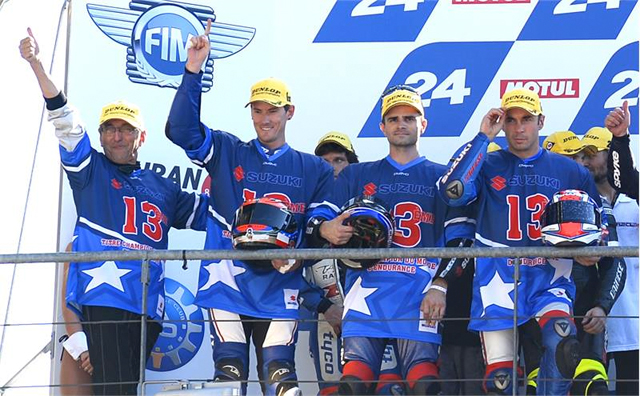 Suzuki Endurance Racing Team has won the 2013 FIM World Endurance Championship after a drama-packed final round at Le Mans in France overnight that saw the Suzuki GSX-R1000-mounted team charge from last position after a small crash and subsequent cooling problem forced a complete engine rebuild on Saturday evening.

SERT, who clinched its fourth-consecutive World Endurance Championship title and eighth aboard the Suzuki GSX-R1000 - four being won on Suzuki GSX-R750 machines and its first title in 1983 on a Suzuki GS1000, topped the timesheets in both Thursday and Friday qualifying sessions; despite the loss of regular team member Anthony Delhalle, who broke his leg and collarbone in a mid-week practice crash.

Despite setting the pace in the early stages of the race, the Le Mans-based squad began a war of attrition when a gentle slide-off by Philippe after just 15 minutes, due to suspected fluid leakage on the Dunlop Chicane, started a chain-reaction of issues inside the Suzuki GSX-R engine that required a further eight quick-fire pit-stops from Philippe.

Team Manager Dominique Meliand's subsequent decision for his crew to completely strip and rebuild the engine in less than an hour, to repair the damage done by the crash-damaged cooling system.

It was a bold but well-timed move; and although SERT slipped back to 54th position, the defending World Champions got back into the race with Da Costa taking his first session and tasked with running-in the newly-rebuilt machine.

"We are disappointed because I wanted it all." SERT Team Manager Dominique MÌ©liand stated. "I wanted to win the title and the race!

"I started out in Endurance in 1969 and I have learned that you must never give up. The crew were just great. When I said we would have to take the engine out to fix a cylinder head seal, no one said a thing even though we weren't sure it would work. But it held for over 20 hours!"

From that point, the Suzuki trio forged consistent lap-times, cut everything down to minimal pit-stops; and also took advantage of other teams suffering similar drama.

Race winners SRC Kawasaki were knocked-off before clawing-back through the pack, Monster YART - who were in a championship-winning position at one point, - were forced to retire along with mid-race leaders BMW Motorrad France; and also GMT 94, who were the first leading team within grasp of the title to crash-out on the problem corner; team leader David Checa remounting from a similarly-unusual slip-off to Philippe's.

The team was caught-up in a high-speed five-rider incident as the event progressed into the night and Andrews suffered two broken legs, broken ribs, a punctured lung and several fractured vertebrae, but was stable and undergoing surgery earlier today. However, the machine was destroyed and the team withdrew.