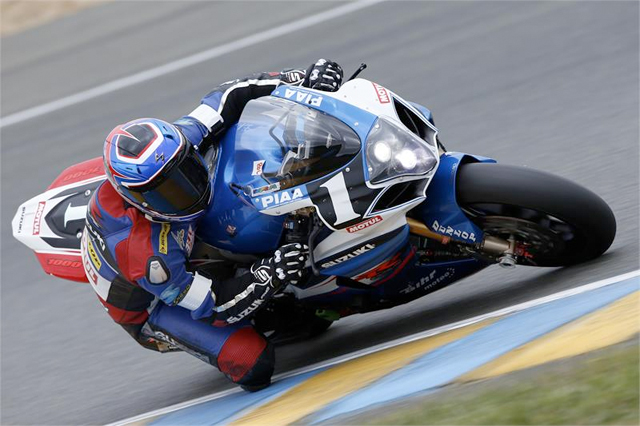 Suzuki Endurance Racing Team has remained on Pole for tomorrow's Le Mans 24-Hour World Endurance final round in France after improving its overall combined time to 1:37.877 in today's final qualifying at the Circuit Bugatti.

The 12-times World Endurance Champions, who are without team rider Anthony Dehalle this weekend following his injury earlier in the week, topped the timesheets by less-than 100th-of-a-second from Yamaha France GMT 94; who significantly improved their overall time from yesterday's opening sessions.

SERT's Vincent Philippe and Julien Da Costa secured better individual lap-times of the day with a 1:37.258 each; as team-mate Alex Cudlin remaining on the same 1:39.116 lap time.

Third place on the start will be taken by yesterday's runner-up SRC Kawasaki, buoyed by Gregory Leblanc's fastest individual lap-time of the sessions (1:37.190). Monster Energy YART - joined by AMA Superbike contender Josh Hayes for the event - secured fourth ahead of BMW Motorrad France.

Tomorrow's 36th 24 Heurs Moto Le Mans gets underway at 15:00hrs (GMT +2) and will be covered live on FIM-LIVE.COM where there will also be a live Twitter feed. The race is also being broadcast by several global Satellite TV Stations, in part and delayed.