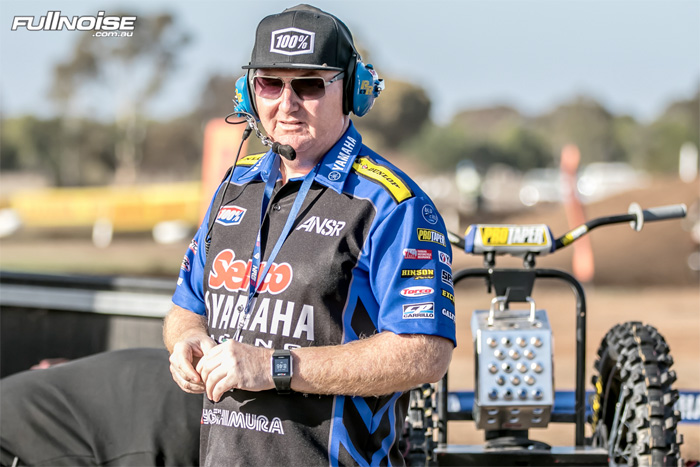 It‰Ûªs been a tough season so far for the Serco Yamaha team when judged against their own lofty standards.

The team has racked up a mantle-piece full of championship trophies in recent times but 2016 hasn‰Ûªt been so kind as crashes have kept Wilson Todd and Wade Hunter from reaching their full potential in the championship so far.

Todd has shown plenty of raw speed and the odd flash of brilliance in his first year in MX2 and continues to learn and grow with each round. He currently lies fifth in the championship so far, highlighted by a moto win at the opening round at Horsham, and notching up round finishes of 4-9-8-5-7. Todd has also put his Serco Yamaha on pole at two of the five rounds contested.

Wade Hunter has found himself in the dirt far too many times for his liking and his results haven‰Ûªt been what he would like or are capable of. With 14-6-7-DNF and 10th place finishes, Hunter sits in 12th place in the MX2 championship but is determined to get back up the pointy end when the series picks back up again at Nowra.

Serco Yamaha manager, Gavin Eales, took the time to discuss the teams season so far and what he feels needs to happen in the second half of the championship.

Gav, how would you sum up the season so far from a Serco Yamaha point of view?

As a team, we are extremely disappointed with the results after five rounds. Everyone from the riders to the mechanics and truck driver have all put in so much effort training, testing, riding and with the bikes but we just haven‰Ûªt delivered the results expected yet.

I feel confident that we will be able to turn it around in the last half of the season and get back up the front where we belong.

Wade seems to on the end of some tough luck so far this year, how is he faring?

Wade is trying so hard, almost too hard, and his results are obviously frustrating him. He finds it strange that he go to tracks during the week and rides amazing, we have all seen him do it many times this year, but come race days, he has been really struggling with starts and bad track position and as a result, gets caught up in the mid pack mayhem.

Rounds four and five he made some progress and hopefully that will kick start a form revival for him.

Wilson has obviously shown he is a fast as anybody, what‰Ûªs the missing ingredient for him to become a champion?

I think most people would be surprised by the speed Wilson can ride and he has really impressed the team with his outright speed but we just need to help him find consistency. We have a plan in place with Wilson over the break and he is coming to Brisbane to work closely with the team that we hope will see him consistently near the front over the last five rounds.

So, what are the goals for the remainder of the championship?

We aren‰Ûªt hitting the reset button as both riders have a lot of positives, it‰Ûªs just a matter of filing away the rough edges. We need to get some consistency from race to race and round to round and then we can start looking at taking some race and round wins before the end of the year.

The YZ250F has won a lot of championships in its current guise, have you done anything different this year to increase performance of the bike?

The new generation YZ250F has proven to be an amazing race bike and had incredible success around the world. Each year we try and fine tune the package little more and develop the bike as best we can along with making it more personable for the rider. I think we have a great bike this year and in time the results will reflect that.