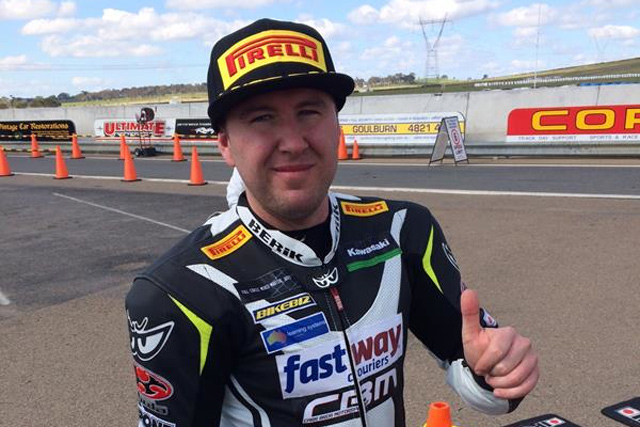 Newly crowned Australian (Irish born) Paul Byrne didn‰Ûªt get the start he was after in the opening race, slipping back from first to fifth at the first turn, but when the race was red flagged on the opening lap he got the opportunity to go again.

When the race restarted he was in third at the opening turn, behind Gas Honda Racing‰Ûªs Chris Trounson and Fastaway Couriers‰Ûª Brayden Carr.

Trounson and Carr had a tight tussle over the next few laps, swapping first position on several occasions before Carr took a lead that he never surrendered.

He was pushed by Byrne who made his way into second spot by the end of the race, while NextGen Motorsports Ben Nicolson finished in third ahead of Trounson in fourth.

In the second race of the day it was again Trounson who took the early lead, with Carr, Jack Fox and Phil Lovett (Cessnock Motorcycles) behind him.

Carr passed Trounson to take the lead on the second lap, while Nicolson moved his way up the field into third position.

Less than two second separated the top three riders as Carr posted a super quick 59.603 on the third lap of the race, while Byrne battled hard after a less than ideal start to move into fifth position through four laps.

Carr set about extending his lead, while behind him Nicolson moved passed Trounson into second as Byrne made his way around Lovett into fourth.

Byrne posted the fastest lap of the race soon after with a 59.281 but had to settle for fourth, as Carr made it two on the trot in taking the win ahead of Nicolson and Trounson.

In the final race of the day, the usual suspects were again up the front with Carr taking an early from Trounson, Byrne and Nicolson.

Unlike the opening two races where the racing was extremely tight and unpredictable, riders stayed in the same positions through the first six laps.

Byrne was close to getting past Trounson before a crash on the penultimate lap saw the red flag raised and the positions at the time declared as final.

It left Carr to make it a clean sweep from the three races in the round and take the win, while Trounson, Byrne and Nicolson all fished the round on 60 points.

On a countback, that is the order they finished for the round.

Nicolson holds a 12 point lead in the outright standings from Matthew Harding heading into the final round.

In the opening race of the day, Brandon Demmery (Noise Guard Racing) took the lead at the first corner from Kyle Buckley (Bcperformance Motogo) and Rennie Scaysbrook (Kawasaki Motors Finance).

Kiwi Bailie Perriton moved into second place on the second lap, and the top-four riders then jockeyed for positions over the next couple of laps.

It was tough, tight racing where the lead and minor positions chopped and changed several times, before a red flag after three laps forced the race to be stopped.

It was hoped that there would be a restart, but the race was eventually declared handing Demmery the race win ahead of Buckley and Perriton, with Scaysbrook in fourth.

In race two it was Demmery taking the lead again from Buckley while Perriton settled into third.

While Perriton moved into first on the back straight during the second lap - it was short-lived, as both Demmery and Buckly came back through on the next turn.

From there the battle at the front was intense ‰ÛÒ less than seven hundredths of a second separating the trio at the end of the penultimate lap.

At that point both Buckley and Perriton were ahead of Demmery but the race was well and truly up for grabs as they rode around the track one last time.

As the chequered flag was raised it was Demmery who got his nose back in front to claim the race win, with Buckley clinging on to second and Perriton left to take third.

Race three saw a resumption of the fierce competition at the front of the grid, with Demmery, Buckley and Perriton locked in another tight one.

Through four laps on half a second separated the three riders, with Scaysbrook not too far behind in fourth.

He made his move on Perriton and into third position on the fifth lap, while posting a scorching lap time of 1:08.943 and that was where he finished the race.

Up front, Buckley streamed past Demmery to take the race win, passing right at the finish to deny Demmery a clean sweep on the day.

Demmery still won the day however, with Buckley finishing second and Perriton back in third and the trio sit in the same positions in the outright standings ‰ÛÒ Demmery holding a 57 point lead heading into the final round.

In the second race it was McMillan again who finished out in front, but this time Arnold got the better of Galloway ‰ÛÒ the pair finishing second and third respectively.

McMillan made it a clean sweep when he took the win in race three, while Arnold again had to settle for second in front of Mills.

The result leaves Galloway still out in front of the series points ‰ÛÒ just three points ahead of Arnold with Kris Keen a further 73 points behind in third.

With Angus Reekie (KTM Racing) out of action for the day after writing off his bike in Friday practice, it was Adrian Pierpoint who rode his Aprilia to the opening race win.

He finished ahead of Richard Draper (Sugar Plum Racing) while Byron Mills (Big Kahuna Racing) was the only other Nakedbike entered, but he did not complete enough laps to register an official finish.

Pierpoint claimed another win in the second race of the day with Draper finishing second and Mills coming in third.

In the final race, Pierpont completed his clean sweep in round five, with Draper finishing second and Mills notching up a DNF.

It means we are in for a ripper at the final round at Eastern Creek, as Reekie holds a slender three point lead from Pierpoint in the championship.

Four riders took to the track for the opening Electric Bike race at Wakefield Park, and as we have seen all season it was Danny Pottage (O‰ÛªHanlon Electric Motorsports) who lead the way.

The Western Australian finished the race more than five seconds ahead of Ripperton Racing‰Ûªs Daniel Ripperton, with Jason Morris (Varley Electric Vehicles) three quarters of a lap behind in third.

In the second race of the day the top-two stayed the same with Pottage making it back-to-back wins, while Craig White finished in third ahead of Morris.