Sanders remains undefeated at round 4 of the AORC 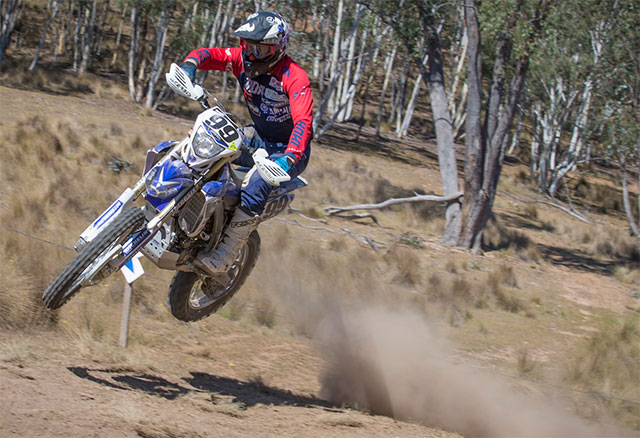 With round 3 done and dusted, competitors kicked off Round 4 this morning, with Portland providing another sunny day for the 2016 Yamaha Australian Off-Road Championship.

With four classes, E1, E2, E3 and EJ competing on the reversed YZ track, today bought even more challenges for competitors, with ruts developing and the continuing dry and dusty conditions testing the abilities of the gunning athletes.

Husqvarna Enduro Racing Team‰Ûªs Glenn Kearney once again managed to defend the top time for round 4 in the E1 class, with a concluding time of 55:05.592. Kearney, who is only weeks out of injury, piloted his Husqvarna machine, to two round victories this weekend. For Scott Keegan the times once again handed him second place, rounding out the day with a 56:13.766 time after five tests. Also aboard Husqvarna, Keegan was followed closely behind by third place getter Stefan Granquist, who finished fourth yesterday (Round 3), but today managed to find the pace and put himself in the E1 top three (58:39.4940).

A new day saw changes in front runners in the E2 class, with Active8 Yamaha Yamalube‰Ûªs Josh Green pushing his limits around the deteriorating track, to top the times after six tests (55:08.965). It was round 3 winner CDR Yamaha‰Ûªs Chris Hollis who was relegated to second place when the times were tallied, finishing off with a 55:27.419. KTM Enduro Racing Team‰Ûªs Tye Simmonds had a consistent round 4, finishing third place for the day with a 56:04.844 time at the conclusion of the weekend‰Ûªs events.

Green, who despite battling injury and having limited bike time, was more than happy to claim the round 4 E2 victory.

‰ÛÏI‰Ûªm feeling really good about the win, I didn‰Ûªt get a chance to ride between the first two rounds and this round, so I was a bit rusty yesterday,‰Û