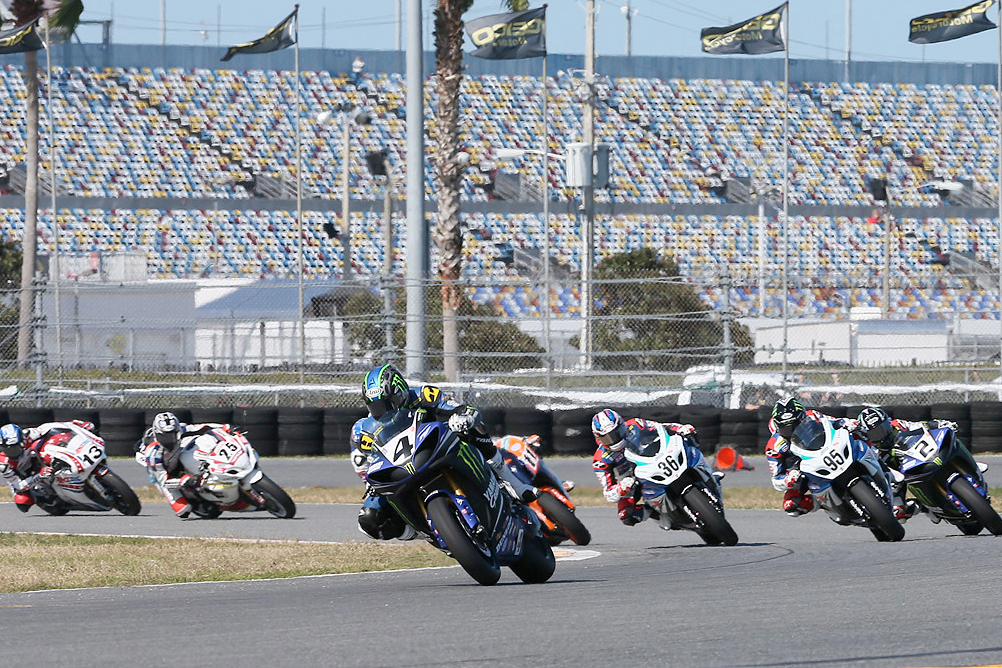 Three-time champ Josh Hayes reminded the world that he's still the man to beat in AMA Pro SuperBike and he won't be beaten easily, with a stunning victory in Friday afternoon's season opener at Daytona International Speedway.

The Monster Energy Graves Yamaha legend came into the weekend anxious to make up for last year's disappointment, both at Daytona and in his subsequent title defeat. However motivated, he looked very much under threat of having his thunder stolen once again.

Hayes' rookie teammate, Cameron Beaubier, shocked the paddock by topping the very first SuperBike qualifying session of his career on Thursday. And then another rival, Roger Hayden, whose challenge has been bolstered by his move to the powerful Yoshimura Suzuki Factory Racing team, stepped forward to claim the second SuperBike pole position of his career.

Despite his opponents' pre-race success, Hayes attempted to leave them in his wake from the start. The Mississippian slotted into first from his starting spot on the outside of Row 1 and proceeded to rip open almost two seconds worth of padding in the race's first two laps.

Cardenas' chances for a second straight Daytona SuperBike win evaporated on lap 4. The Colombian lost the front and crashed in the infield just as the trio was making solid progress in their combined effort to run the leader back down. That mishap, along with Beaubier's and Hayden's successful counterpunches, transformed the race into a three-rider scrap for the lead on lap 5.

The rookie then tested his highly decorated teammate on multiple occasions while Hayden settled in for a more patient ride, content to sit close behind in third.

On lap 6, Beaubier made his first rookie mistake, running wide entering Turn 1 after getting a full head of steam in Hayes' draft and nearly blasting by into the lead. While it seemed likely that Hayes and Hayden would then decide the race between themselves, Beaubier put his head back down and erased another near-two-second margin in just three laps time to once again fight his way into the mix.

The 21-year-old even managed to sneak the nose of his YZF-R1 into first on a few occasions, but the cagey Hayes always found a way to put his wheel over the stripe with the lead.

With less than two laps remaining, Beaubier repeated his earlier error, again running wide as they came off the banking. This time, he left himself too few laps to work back into contention for the win and was forced to accept a third-place result in his premier-class debut.

Despite a couple of missteps that may have cost him victory, Beaubier demonstrated his immense potential by setting the race's fast lap, a 1:37.425 that was nearly eight tenths better than Hayes' fastest.

This all seemed to unfold in Hayden's favor, positioning him perfectly for a final-lap strike. The Suzuki pilot powered out of Hayes' slipstream and moved up alongside him in the run to the checkered flag. But Hayes wisely forced Hayden to commit to an outside line, and in the end, the triple champ held on for the win by a scant 0.025-second margin.

While they both proved themselves worthy challengers, rather than allow Beaubier to score his first or Hayden his second, Hayes came through for his 42nd career AMA Pro SuperBike win.

"I couldn't be happier," Hayes said after redeeming last year's Daytona double DNF. "It was a great day, and it was a really fun race. There was a lot of nervous pressure out there.

"It was '+0' on the board the whole time... Well, I actually had a gap for a little bit but they closed it down. I was like, 'all right, stay settled down, and just ride smart.

"It was fun racing but hard on the nerves, hard on the old ticker. I still have a few tricks up my sleeve; let's see if I can pull out a few more tomorrow.

"The last lap, I could tell Cam had run wide, and I knew Rog was right there. I could hear his bike. My biggest thing was I knew I had to hit the apex of every corner. I couldn't run wide and just give him an opportunity., On the banking I brought it down pretty tight.

I was hoping that if he tried, he'd have to go the long way and go up on the high part of the banking. I figured that was my only chance because if I let him get underneath me, I'd be dead meat." Hayes added.

Runner-up Hayden was happy with his race despite coming up just a little short.

"It was a pretty good race. It took me a little while to get going the first few laps and Josh got a nice gap. When Cameron came by me, I just sat in behind him instead of trying to battle back and forth and slow us down." Hayden commented. "I was hoping he could pull us back to Josh, and he did. I was just sitting there at the end.

"I didn't really know where I could get by, but I got a drive coming out of the chicane on the last lap. I almost got Josh there at the end, but I just came up a little short."

"I definitely feel good about that ride." Beaubier admitted. "I made a few mistakes, rookie mistakes. I was all excited that I was up at the front, battling with those guys, they were riding really good.

"I made a mistake and burned up my tire trying to catch back up after I blew the first corner. But I'm really happy."

Meanwhile, Cardenas remounted his fallen GSX-R and charged back up through the field, finally working his way to 12th in the end. That determined ride helped to somewhat lessen the damage his spill had to his championship aspirations.

Hayes and his emerging rivals will be back at it on Saturday as they'll clash in the second half of the season-opening Daytona doubleheader tomorrow morning.

AMA Pro GoPro Daytona SportBike
Danny Eslick (Riders Discount Racing Triumph) won pole for the 73rd Daytona 200. Eslick turned on the jets to set a mark of 1:49.292 in the waning minutes of qualifying on Friday. For his efforts, Eslick won a Rolex watch.

Eslick had previously won pole for the race while competing on a Suzuki, but his super lap time had competitors shaking their heads.

"We didn't really have a major game plan going into qualifying," said Eslick. "It was a pretty short session here at Daytona because the lap is so long. I didn't get out right as the track went green because I wasn't really ready. And if you're not with the group and drafting, you're just left out to dry. I rode around the first three or four laps by myself."

"We came in and threw a tire at it and waited for someone to go by," he continued. "I was actually waiting for Jake Lewis, but I saw (Garrett) Gerloff and Jake Zemke go by and I took off after them. I got by Zemke and I just tucked in.

"Gerloff was a ways ahead of me and I didn't think I was going to be able to catch him, but he got hung up in a couple little groups of guys and it seemed like I got a big draft off another Triumph. And then I got a draft off of Gerloff, and that made all the difference in the world for me for that lap."

Eslick will be joined on the front row by Garrett Gerloff and Jake Lewis. Gerloff, the Yamaha Extended Service/Monster Energy/Graves/Yamaha pilot who had been at our near the top in every session, was disappointed not to have earned pole.

"Man, I wanted that watch," said Gerloff. "I didn't know Danny was behind me. He must have gotten a double draft or something. I don't think it is the fastest I can go this weekend.

"I think we have the best consistency of pit stops. I am disappointed I didn't get pole but I am looking forward to the race.

Jason DiSalvo was fourth on the Castrol/Triumph/Sportbike Track Time Triumph Daytona 675. In fifth place, Dane Westby rode conservatively and set his best mark riding alone without the aid of a draft on the Yamalube/Westby Racing Yamaha YZF-R6. J

Alexander rocketed off to a lead, moving away from the pack by the chicane on lap one.

"The first lap is huge. Getting away and breaking the draft on the first lap was what it was all about," said Alexander. "I didn't know what was going to happen, and I didn't know how far a gap of six seconds really was. I didn't know if I could slow down too much. I'll try it again tomorrow.

"To start the year on the box was huge," said Farris. "I settled in and tried to put a plan together. I got away a bit on those last two laps and was able to come home second."

Dustin Dominguez had problems on Thursday, which hurt his qualifying effort. However, Dominguez made a solid charge through the field in the opening race, holding second for a time and before eventually earning third place.

"I made it a little hard on myself by crashing during qualifying, so I had to start part-way back," said Dominguez. "The Yamaha is working really great this weekend, and I can't thank the team enough. The bike is working great, and hopefully you'll see me on the podium more often."

FansChoice.tv will be the official home for live streaming coverage of AMA Pro Road Racing and AMA Pro Flat Track events in 2014.

Top Image: Josh Hayes on his way to winning the opening AMA Superbike Race in 2014