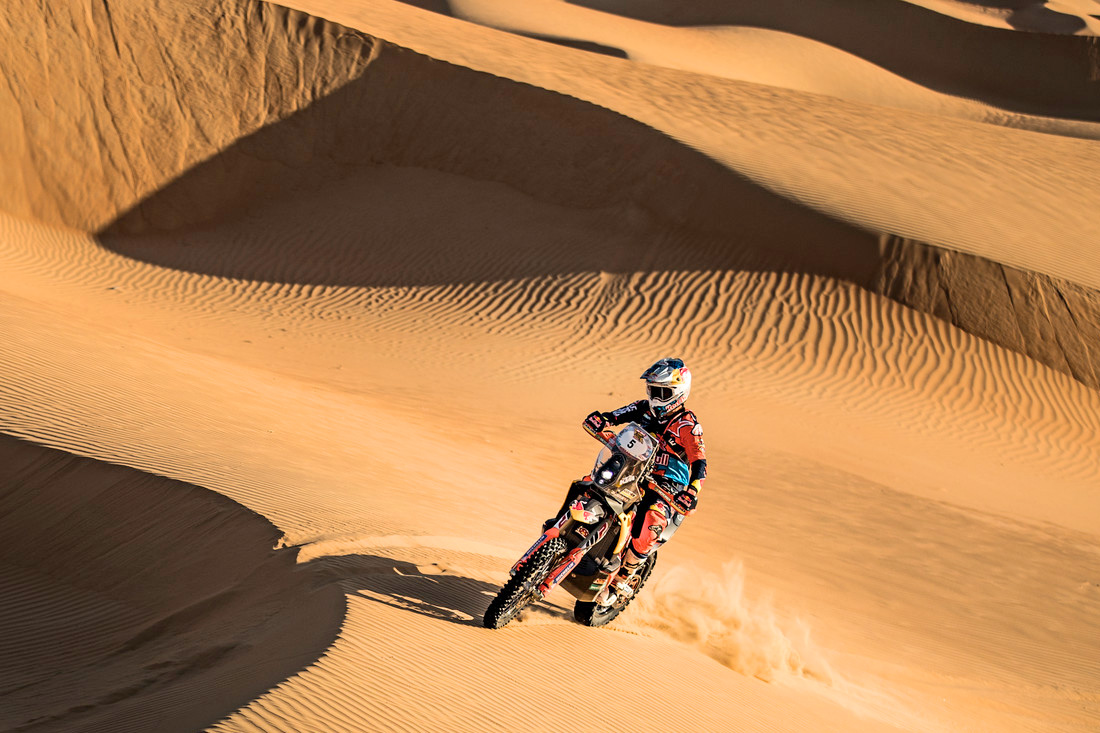 Sam Sunderland was first at every waypoint through the timed special and it wasn‰Ûªt long until he caught the front-runners. Photo: Marcin Kin
Red Bull KTM Factory Racing‰Ûªs Sam Sunderland has won a hot and gruelling stage three of the 2018 Abu Dhabi Desert Challenge.

Matthias Walkner, having been caught by Sunderland, crossed the finish line second, three-minutes down on his team-mate. Honda trio Kevin Benavides, Ricky Brabec and Paulo Goncalves finished third, fourth and fifth respectivly. Stage two winner and leader going into stage three Pablo Quintanilla dropped to fourth in the event‰Ûªs provisional overall standings after a small technical issue forced him to ease his pace, eventually finishing the stage in 8th.

Stage three of the 2018 Desert Challenge saw riders cover numerous large sand dunes in the Liwa Desert, just south of Abu Dhabi. Comprised of deep, soft sand and steep drop-offs, the first half of the stage rewarded careful navigation and the ability to read the terrain. The 281.38km timed special proved to be one of the toughest of the rally so far in the heat of the United Arab Emirates sun.

Setting off fifth this morning, Sam Sunderland immediately pushed to catch the four riders in front of him. The Brit‰Ûªs pace placed him first at every waypoint through the timed special and it wasn‰Ûªt long until he caught the front-runners. After catching team-mate Matthias Walkner just after the refuelling stop, the pair raced on together ultimately claiming the top-two positions come the finish. Sunderland now leads the provisional overall standings by over seven minutes.

"That was another long, hot day in the sand for the bike and my body," Sunderland said. "I am feeling good though and I‰Ûªm really happy to win the stage and put some time between myself and the others. My start position helped a lot today, I was able to push right from the start and chase down the guys in front. Obviously, it means I will be opening the stage tomorrow, but we still have two days of riding left. I‰Ûªll continue to push on and we‰Ûªll see what happens at the end of the rally.‰Û 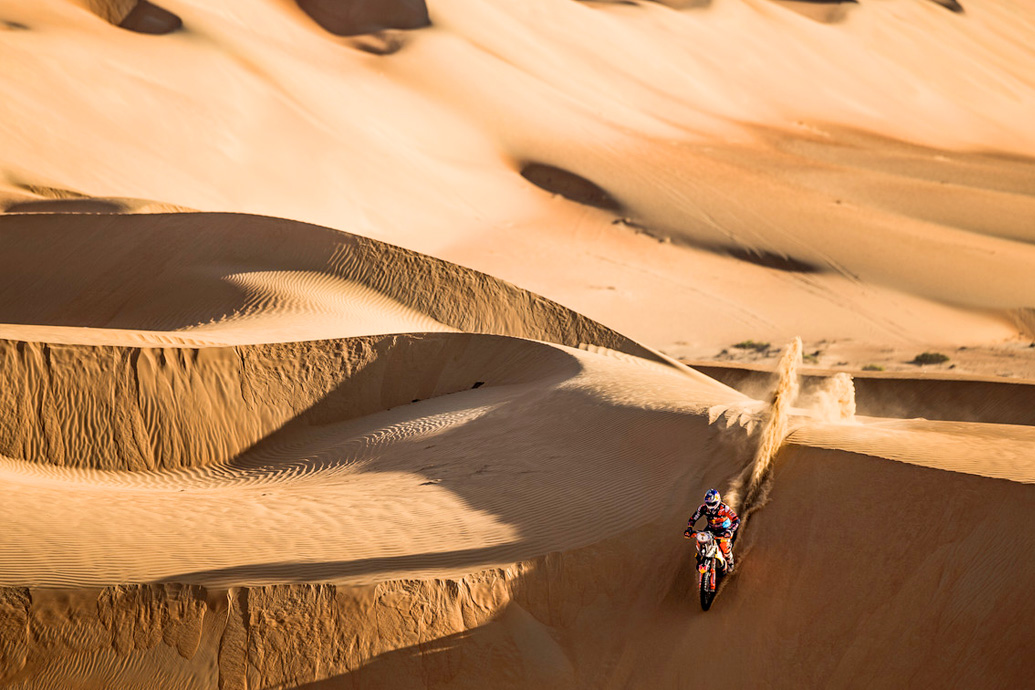 "Today went well for me. The stage covered some deep sand and the speed through the dunes was not so fast so we chose a different tyre and it performed really well," Walkner explained. "I managed to find a good rhythm and was able to keep to that pace for most of the day. Sam caught me in the second half of the special so we ended up riding together and were able to push on a little more. We caught the other guys in front around kilometre 220 and so I‰Ûªm really happy to take second position for the day. I have a little pain in my shoulder, but I‰Ûªll rest up now and then we will prepare for tomorrow.‰Û 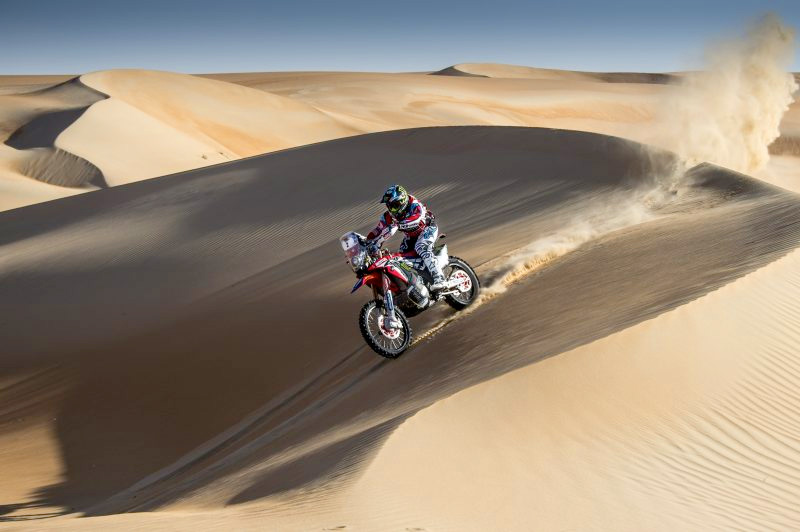 Monster Energy Honda Team rider Kevin Benavides led home a trio of Honda riders with third place on stage. Photo: Edoardo Bauer
Monster Energy Honda Team rider Kevin Benavides, who started second today, was able to hunt down the rider who opened the course, managing to pull ahead of the field over several kilometres, before being reached by the other riders. Benavides eventually finished third and holds third position in the overall standings.

"I felt good. I went out to push hard and I was able to catch the rider who started first and then I had to open the track for quite some time," Benavides said. "I felt very confident on the bike in this special desert. The bike has given zero problems. We have to keep on like this, pushing hard over the two remaining days of racing and see how things turn out in the end." 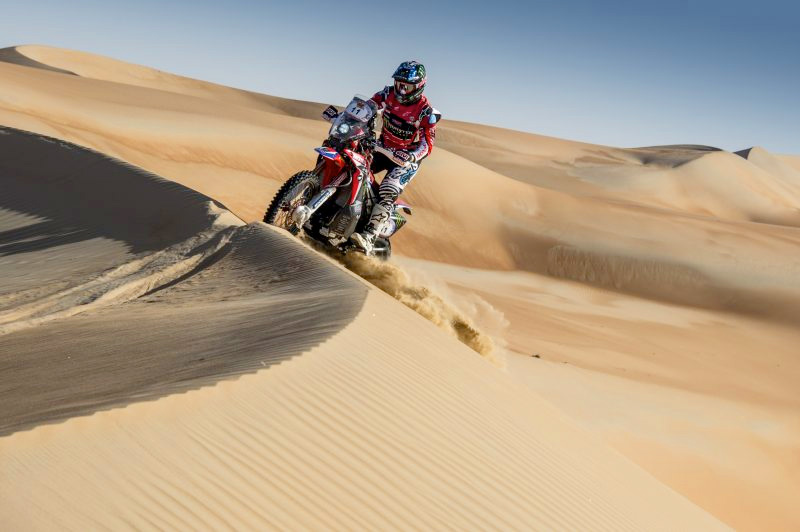 American Ricky Brabec finished in fourth place, half a minute adrift of his team-mate Kevin Benavides. Photo: Edoardo Bauer
American Ricky Brabec decided to up the ante today and try to increase speed in spite of the dangerous cut dunes of the Liwa. Brabec posted fourth place, half a minute adrift of his Monster Energy Honda team-mate Benavides, but ahead of Portuguese rider Paulo GonÌ¤alves who had suffered a minor fall whilst taking a jump. The rider got stuck briefly in a dune, dropping some time in the process.

"This third day was good," Brabec said. "We got into the bigger dunes. It was very fast. I don‰Ûªt like it so much at high speeds in this type of undulation and rolling dunes, where you can‰Ûªt see what‰Ûªs on the other side. My body is not tired yet and we are ready to face the next few days." 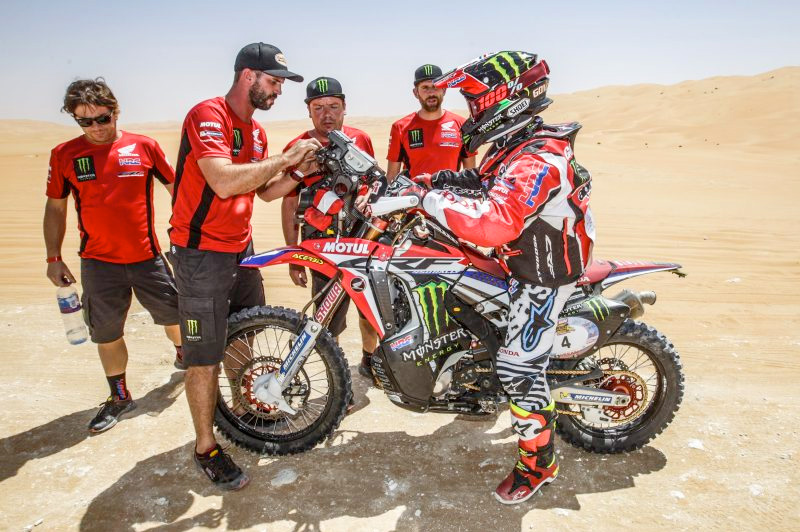 Paulo GonÌ¤alves finished fith despite a small crash that resultes in a slightly damaged my shoulder. Photo: Edoardo Bauer
Paulo GonÌ¤alves didn't come away from the stage completly unscathed.

"Another long stage full of dunes. I felt pretty good at the start, and pushed with a fast pace," GonÌ¤alves recalled. "I caught the rider in front of me and we rode very quick until I fell at a cut dune and then got stuck. I slightly damaged my shoulder and until the end I had to take it a bit easier. The objective is still to accumulate kilometres... and for the moment we are doing well." 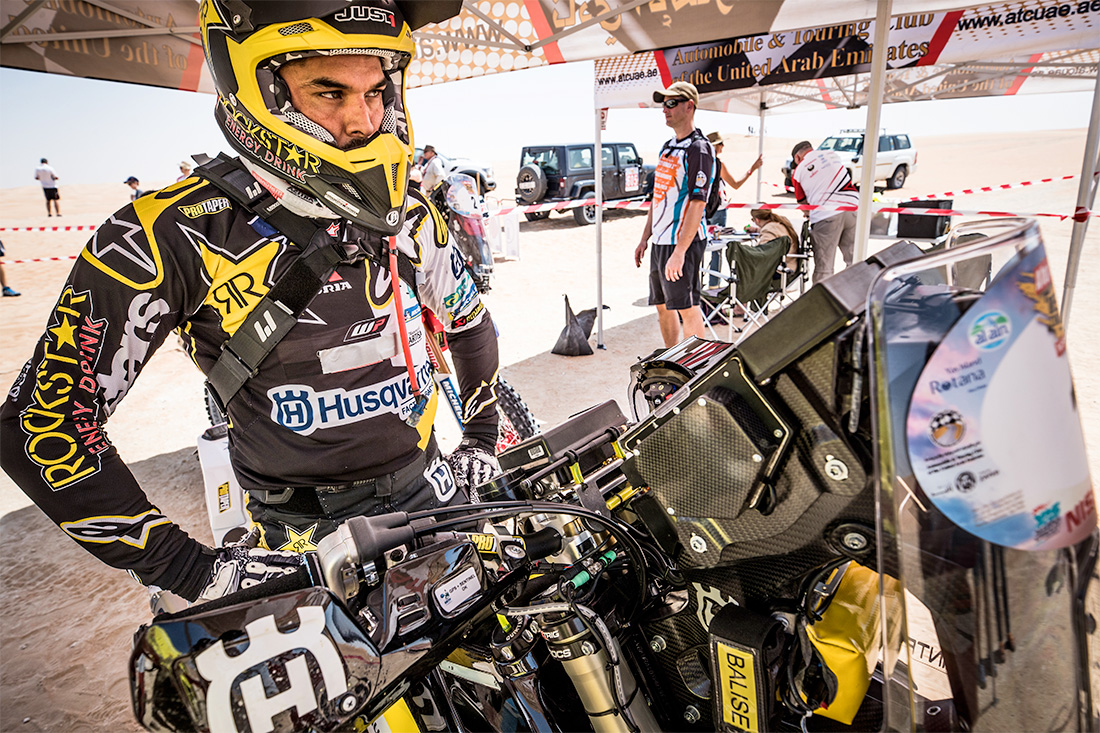 Stage two winner and leader going into stage three, Pablo Quintanilla, dropped down the order after a technical issue limited his speed, he finished eighth and dropped 12 minutes.
Making good use of his experience, Syage two winner Pablo Quintanilla posted the eighth fastest time for the day. Currently fourth in the provisional overall rankings, Quintanilla has his eyes set on taking advantage of his good starting position tomorrow in the hope of reducing the gap to the riders ahead of him.

‰ÛÏI was having a great day until the refuelling point," Quintanilla said. "The stage started with some big dunes and some massive drops. The pace was quite fast. As the first to take the start this morning, I was doing my best to stay up front and my pace was good in the fast sections. Right after the refuelling point I had a small technical issue that didn‰Ûªt let me continue in the same rhythm.

"I was unable to keep the pace with the guys up front and had to do my best to avoid losing much time. At the end I‰Ûªm happy I brought my bike home and I‰Ûªm still within striking distance to the top. We finished a tough stage and we now have two more to go in this rally. Everything could happen and I will do my best to make up for the time lost.‰Û 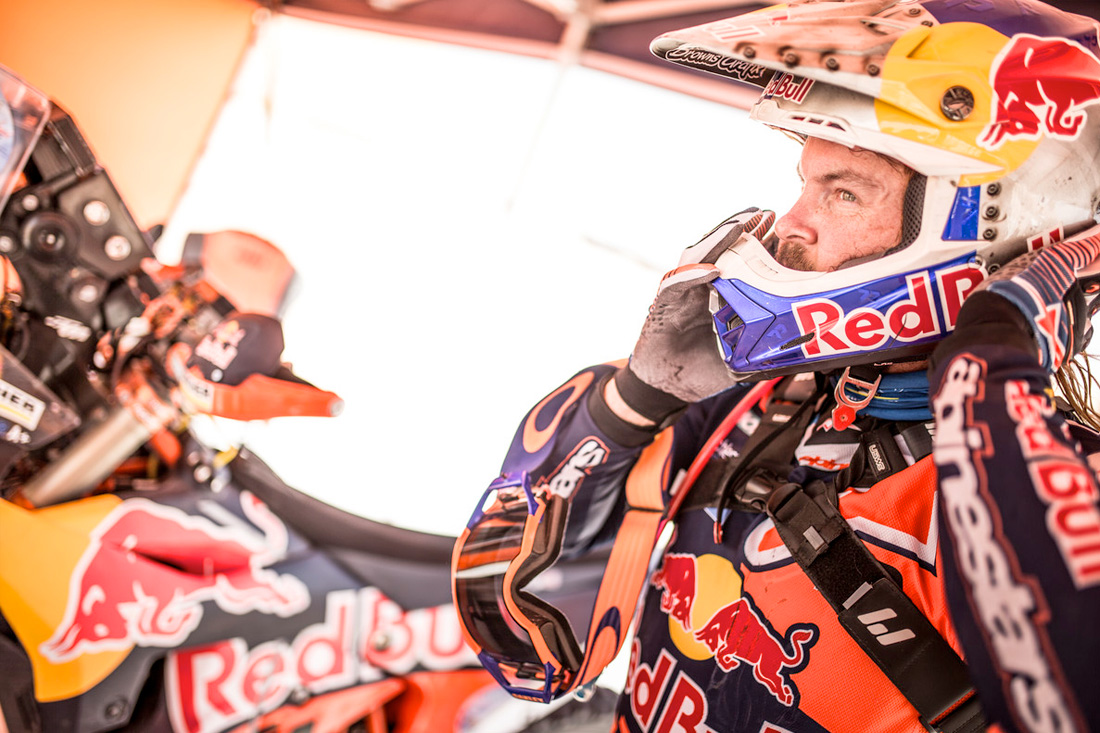 Toby Price was still suffering a bit after yesterday's big crash. He also stopped to help an injured rider. He rounded out the day in 11th. Photo: Marcin Kin
Following his crash on yesterday‰Ûªs stage two, Toby Price did his best to conserve energy today, whilst keeping to a good speed through the desert. His pace placed him within the top-five at many of the early waypoints. After stopping to help a fellow rider, the 2016 Desert Challenge winner eventually placed 11th, with the time lost being credited to him at the finish. Price now lies eighth in the overall standings.

"The stage was good today, I got through the first half feeling really comfortable on the bike and setting a good pace through the steep dunes. I am suffering a little after the crash I had yesterday so I‰Ûªm certainly not riding at 100%, but all-in-all things are going well," Price said.

"On the second half of the stage Balooshi had a crash in front of me and I stayed with him for a little while to assist. Luckily, he is going to be ok and is not too badly hurt. I‰Ûªll take the last two days as they come and just try to conserve myself and get to the finish so I can let my body recover.‰Û