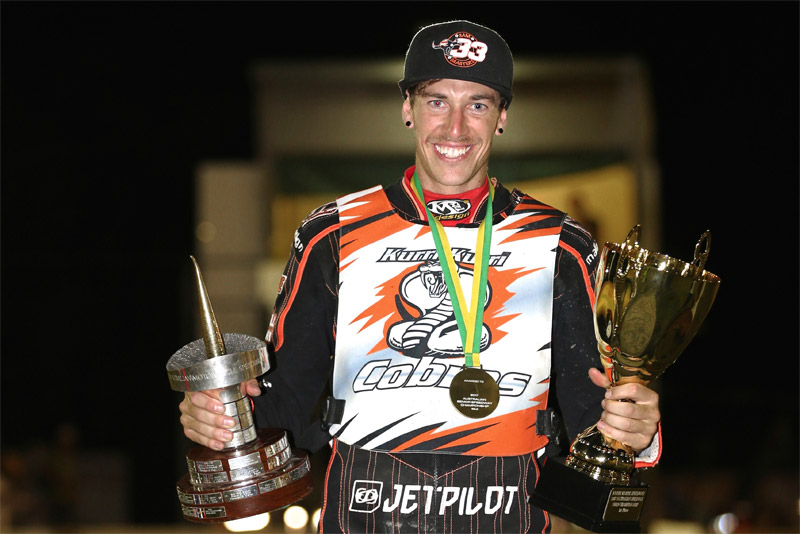 It was ‰Û÷third time lucky‰Ûª for the 25-year-old from Newcastle, Sam Masters as he took possession of the 2017 Australian Speedway Senior Solo Championship crown on Saturday night, in the final round four at the Kurri Kurri speedway circuit after placing second in well fought 2015 & 16 Championships.

Feeling comfortable at his home track, Sam Masters topped the heat scoring highly on 14 points, becoming the number one seed ahead of the A Final decider.

Round three winner and 2017 title hopeful, Justin Sedgmen did not have the night he hoped for, scoring only 9 points, barley getting him a start in the B Final. Sedgmen still managed to finish the Championship in second place overall thanks to his consistent racing in previous rounds, sitting on a total of 55 points.

2017 Championship hopes of young gun, Jack Holder (reigning Under 21 Champion) have been dashed after he suffered an unfortunate crash in heat eight and was medically cleared of a shoulder injury to score only 3 points for the night. The race included Sedgmen, Campton and Fricke, which restarted without him.

The all-important A Final saw Brady Kurtz, Nick Morris, Sam Masters and Troy Batchelor fly off the line and pile into turn one, where Masters looked to be a little flustered and out of contention. However, he managed to get the rear tyre to bite hard on the exit and launch to the lead.

‰ÛÏI won all my heats, but I got second in my last, my engine was starting to get tired." Sam Masters shared, Immediately after his win an ecstatic of 58 total points. "It has been working well all series, but race engines don‰Ûªt last very long. We got what we needed out of it and I‰Ûªve come out the winner!‰Û