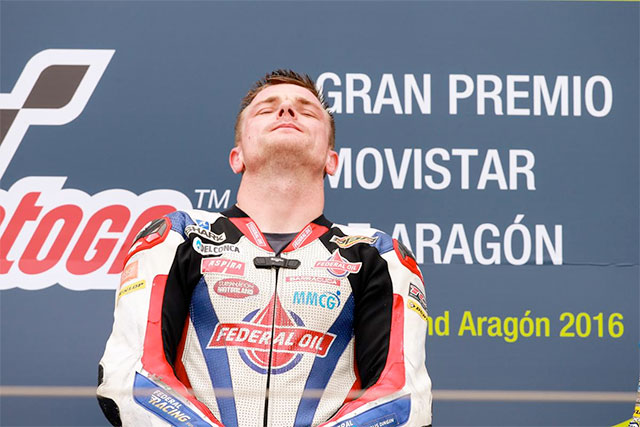 Estrella Galicia 0,0 Marc VDS rider Alex Marquez put in a superb ride to take his first ever podium at his home track in P2, with teammate Franco Morbidelli taking second from the Spaniard on the final lap - only to be taken straight back.

Marquez took the lead from second on the grid at MotorLand Aragon, as the 2014 Moto3 world champion took off where he left off in third and qualifying - at the front. Sunday dawned overcast and cooler, with air temperatures hovering in the early twenties but no threat of rain, and the field streamed through Turn 1 with Lowes and Marquez leading the way.

Lowes shadowed the rider from Cervera before taking back the lead - and then disappeared at the front in a controlled and dominant showing of scintillating race pace to bounce back from disappointment in Misano. The Brit was over three seconds clear by the flag, gaining a good margin of points to those near him in the title fight.

Franco Morbidelli fought his way past Takaaki Nakagami (Idemitsu Honda Team Asia) to hone in on Garage Plus Interwetten's Tom Luthi, as the Italian-Brazilian lit up the timesheet to pass the Swiss veteran and then set his sights on teammate Marquez - catching him but unable to make it stick, with the EG0,0 Marc VDS garage suffering some late race stress as the teammates dueled it out around the final corner. Morbidelli was also fastest in Warm Up on Sunday morning and shot through the field after a slightly more difficult qualifying. 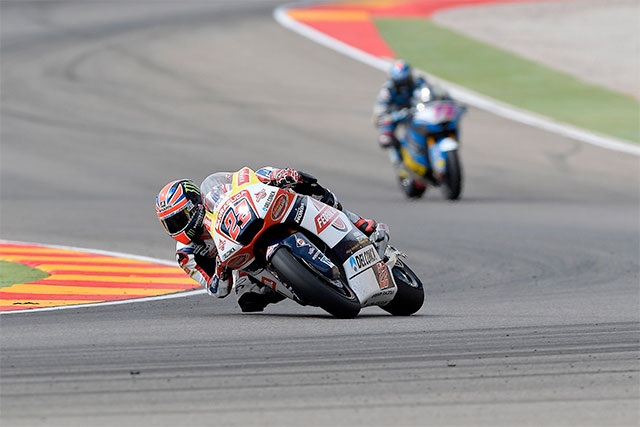 Sam Lowes on his way to victory
Luthi completed the top five in front of Nakagami, with the two having more lonely rides to the line as battle raged behind, with Alex Rins (Paginas Amarillas HP 40) emerging top from a four way fight with Lorenzo Baldassarri (Forward Racing), Johann Zarco (Ajo Motorsport) and Simone Corsi (Speed Up Racing).

Zarco, who was down in tenth at one point, had a tough race in Aragon but just retains the lead in the title - with the gap now cut to an incredible, single point. The Frenchman has seen Rins rolling with some serious momentum of late, and also had a tough race at MotorLand in 2015 - when on the verge of the title. Jonas Folger (Dynavolt Intact GP) completed the top ten behind Corsi after a more difficult weekend for the German, with the upper echelons of the Moto2 title fight shuffling every weekend. 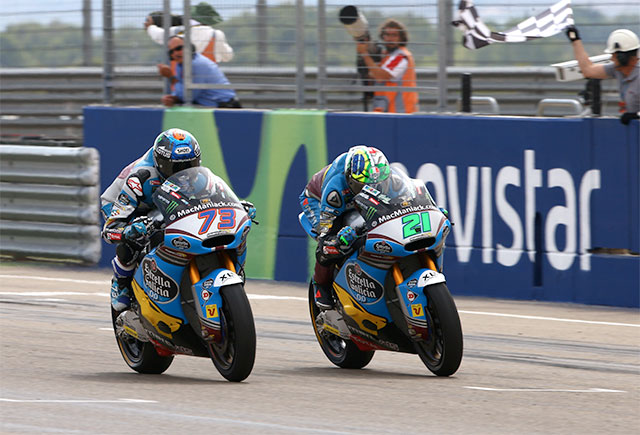 Team Estrella Galicia 0,0 Marc VDS riders Franco Morbidelli and Ì
‰ÛÏWe worked really hard all weekend, making long runs in every practice session, so I was really confident for the race," Lowes said after the race.

"That‰Ûªs why I tried to get to the front as soon as possible and make a god rhythm. Once I had a bit of a gap I just tried to relax and keep my pace. This makes a change compared to the last few races, we have shown a good level of competitiveness and it‰Ûªs nice. Now we are 40 points behind the lead in the Championship, so everything can happen and for sure we won‰Ûªt give up. I feel good on the bike and we will take this confidence to Japan, where we will do our best!‰Û