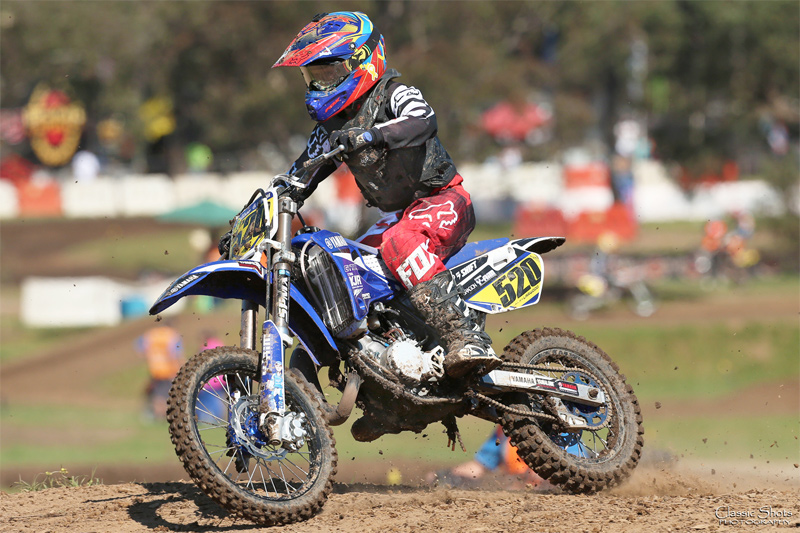 This years‰Ûª Australian Junior Motocross Championships were held at the Appin MX Track in NSW from the 26th of September to the 3rd of October.

The weeklong event tested a new format this year which seen all classes under 12 years old held over the first three days followed by the 12 years and over for the remaining days.

SA-YJR‰Ûªs Alex Larwood kicked off the week on board his YZ85 and 65cc machines and running the two bikes with the new format was going to be a real test for the youngster. Alex posted awesome results throughout all his heats finishing inside the top three in every heat qualifying him fourth overall on his 85 and second on his 65.

In a huge field of 9-11 years 85cc riders, Alex struggled on the opening laps of each race but relaxed and settled in and pulled 4-5-4 results for fourth overall. Then on his 65, he took 4-2-4 results which landed the young gun a solid 3rd overall, an awesome result. This is a huge feat for SA-YJR and marks our first podium at the AJMX in seven years of competing in it.

Nick Day was extremely nervous coming into this year's event after missing last year with a broken arm but wanted to make a mark as it would be his last as a junior competing in the 15 years divisions.

He qualified just outside the top 10 in both 250f and 125cc classes and was looking to improve more in the finals. Nick lined his YZ's up for the finals and gave it all he had. Not getting the best of starts he fought hard and ended up with 9-7-13 moto finishes to land him eighth overall in the 15years 250F class then he claimed 20th overall in the 125cc 15 years class after a few mishaps.

Thomas Larwood had a bit of a rough week dealing with nerves and a track that was completely different to anything he had every ridden. After a night of preparing himself and watching a few other races he set out to have a better day two. With better starts and feeling a bit of confident, he managed to qualify in 38th place. The first final seen him have a small crash but the second moto was his best of the week, taking a 18th.

The final moto saw Thomas involved in a big first turn crash which left him a long way behind. He ended the week with 28th overall in a big field of riders.

"I'm so pumped for Alex, it's the teams‰Ûª first ever podium result and I'm sure it won't be Alex's last either." Metcalfe enthused.

"Both Nick and Thomas rode with nerves and struggled at times, but I am very proud of the final outcome and I hope all three boys learnt from the week and take it all on board for the future." Metcalfe added.

Top Image: Alex Larwood was in top form all week at the 2014 AJMX.