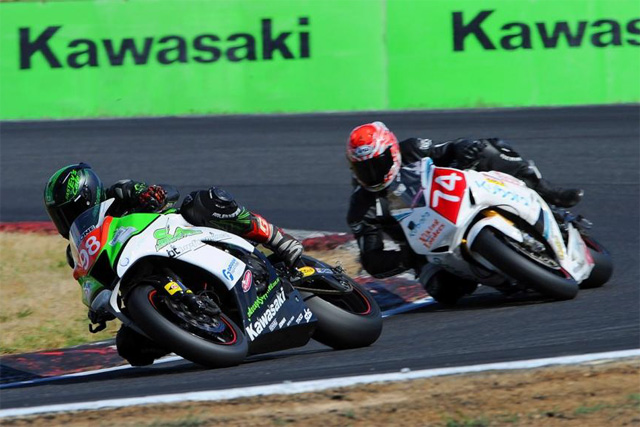 Round six of the Swann Insurance Australasian Superbike Championship kicked off under glorious blue skies at Winton Raceway, with the perfect conditions setting the stage for numerous circuit records.

The team arrived the previous day in order to be race ready today with all riders and team members ready from the get go.

The team‰Ûªs superbike riders, Ben Burke and Evan Byles, both had successful days on track, benefiting significantly from last season‰Ûªs data and recent testing sessions at the circuit. Both riders headed out for the first practice session to get reacquainted with the track and posted respectable times.

Come session two however, both riders took things up a notch. Sessions three and four gave the riders time to consolidate and make small improvements for qualifying. Ben scored 8th place on the grid with a qualifying time of 1:23.887, just 1.967 back from pole, while Evan slotted in in 10th place with a 1:28.943.

Supersport riders, Paul Young and Kyle Buckley both put in solid performances for the day. Paul‰Ûªs times continued to drop throughout the day, culminating in a qualifying position of 8th with a 1:27.033. Kyle put in more sensational laps on Friday, finishing in the top three all day and finally qualifying on pole with a 1:25.242. This is Kyle‰Ûªs first pole as a supersport rider and something he has been working extremely hard towards all year long ‰ÛÒ huge congratulations to Kyle and his crew chief, Vaughan for finally reaching that milestone.

Jimmy Broadbent and Paul Young both excelled on their Ninja 300 mounts, Jimmy had his first highside in practice but repaired his confidence to ultimately qualify fourth in his first ever front row start. Paul‰Ûªs day panned out equally well, topping the time sheets and qualifying in pole position, with a time of 1:37.170, 2.136 seconds ahead of his closest competitor.

After each making a couple of changes through the day, both riders are very well positioned for the main event ‰ÛÒ Sunday‰Ûªs racing.

The SA Kawasaki BCperformance Supersport riders both had a sensationally successful day, despite a couple of hiccups through the day. Paul Young put in another superb performance on his 600, notching up two 4th places and a 3rd.

This is a wonderful result for Paul after so much hard work has gone into developing the bike. Kyle didn‰Ûªt have quite as successful a day, but could very much be classified as a success in another way. In race one, Kyle had to pull in due to gearbox issues.

The team‰Ûªs Ninja 300 Cup riders, Jimmy Broadbent and Paul Young continued their successful run in the 300 class. Jimmy, the team‰Ûªs rookie, continued gaining more experience and is riding with increasing maturity in every race, recording a 5th, 3rd and 4th for the day‰Ûªs races, cementing his position as one of the leaders of the Under 20 class and scoring very well in the overall points lead.

In regards to points for Saturday‰Ûªs racing, Jimmy finished in 2nd place in the Under 20 class and 3rd overall for the day. Paul Young continued his absolute domination of the 300 class at Winton Raceway with one DNF and two wins. The DNF came as a result of a gear linkage malfunction, forcing him to retire from the race while in the lead. His two race wins both came in sensational fashion, finishing well ahead of the pack on both occasions.

Sunday‰Ûªs racing panned out to be just as exciting and rewarding as expected with each rider achieving at least one of their personal goals. Superbike riders Ben Burke and Evan Byles both pushed hard on track and making the most of the set up changes overnight.

Ben‰Ûªs 9th and 5th places in the first two races were just a prelude to his epic battle with Matt Walters in his final outing for the weekend, only just being pipped on the line by less than one hundreth of a second to finish up in 8th place.

‰ÛÏIt took me a little longer than expected to get up to pace as I was struggling with bike setup.‰Û