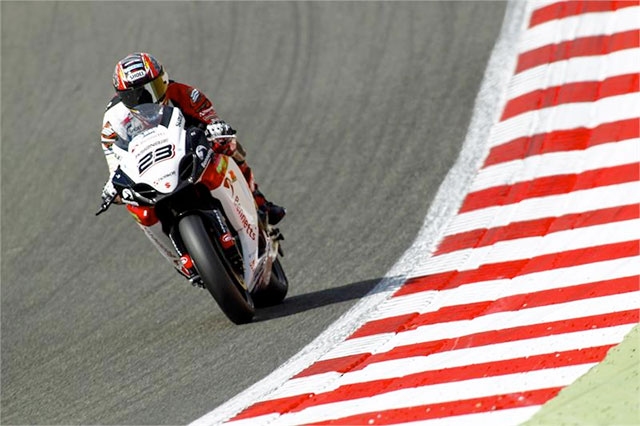 Ryuichi Kiyonari has suffered a broken collarbone after a fall on his Bennetts Suzuki GSX-R1000 at Graham Hill bend at Brands Hatch.

The crash occurred during the second Free Practice session for the third round of the MCE British Superbike Championship, with the three-time champion losing the front at the downhill left-hander early in the session.

He will now miss the remainder of the weekend and will focus on getting fit for the fourth round at Knockhill in June.

It happened after Kiyonari had posted the fastest time of the session. As the session progressed, he relinquished the top spot on the timesheets, but such was the Japanese rider‰Ûªs pace around the Brands Hatch Indy circuit, it was still enough to claim fourth place by the end of the session.

"I‰Ûªm very disappointed because I was feeling really good and really fast on my bike, but unfortunately I made a small mistake and it has ended my weekend," Kiyonari said.

"I didn‰Ûªt have enough load on the front as I braked for turn three, and it tucked underneath me. It‰Ûªs gone from upright, which is why I went down quite hard and have fractured my collarbone. It is a shame because I set a quick time quite early in the session and maybe could have gone faster, I wasn‰Ûªt pushing too much from the start, so it is a real shame.

"I‰Ûªm sorry for the team because I was feeling confident and they were working hard. Now I will focus on getting fit for the next round. There is a bit of time and I‰Ûªm hoping to be back for a test at Snetterton, but definitely for Knockhill," Kiyonari concluded.

Team Owner Martin Halsall added: ‰ÛÏThis is a tough one to take. We had a bit of a difficult start to the season, but after the disappointment at Oulton Park we were really looking for a positive weekend. It started well, with Kiyo in a strong P10 after the opening session.

"We made some changes and he was instantly fast in FP2, heading to the top of the timesheets early on but unfortunately bad luck has struck again. It‰Ûªs especially hard to stomach when the time he set was still good enough for fourth in the session and we had every confidence we could see Kiyo up the front this weekend. Luckily we have a bit of a break before the fourth round, so we‰Ûªll now help him focus on getting fit for Knockhill at the end of June.‰Û