Ryan Villopoto aims to wrap up his second straight title in the next two rounds. 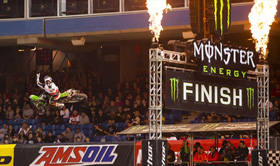 Monster Energy Kawasaki's Ryan Villopoto seventh win of the season over the past weekend in Toronto Canada has put him in a position to wrap up the 2012 Monster Energy AMA Supercross championship in the coming weeks.

Villopoto's win was not all smooth sailing inside the Rodgers Centre, after getting out to an early lead he nearly chucked the race away in the nasty whoop section as, after a little side saddle riding he was able to gather it all up and ride away for another race win.

"My starts were great all night," said Villopoto. "I made a couple big mistakes in the whoops the first couple laps and almost threw it away. I felt really good on the rest of the track, but it took me a while to get the whoops sorted out." said the reigning Supercross champion.

With a 79 point lead over closest rival in the points chase Ryan Dungey and a further 15 points further back to James Stewartt in 3rd place who are both currently out of action due to injury, there is a big possibility of Villopoto wrapping up his second straight Supercross class championship with the closest active rider Davi Millsaps in 4th position already over 100 points behind him.

If Villopoto does not wrap the title up this coming weekend in Houston it is a near certainty that he will achieve his aim of claiming the championship win by the time they leave the final dome venue in New Orleans, at the Louisiana Superdome, on the 14th of April after a two week break in the season.

"From here the plan is to keep going for wins and try to wrap this title up while we're still in dome stadiums." concluded Villopoto