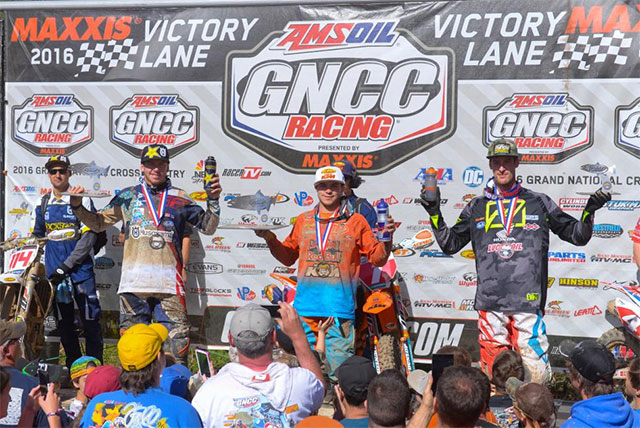 With a mix of sun and mild temperatures the groundwork was laid for one of the best races thus far in the season. At the end of the grueling three-hour race it was FMF/KTM Factory Racing's Kailub Russell who claimed the overall win.

"The season started off rough, but I'm glad to be back on the podium," said Russell. "The championship chase still isn't over and I've still got my eyes on it."

As the green flag dropped it was Russell's teammate, Charlie Mullins who headed into the woods first earning himself the $125 All Balls Racing Holeshot Award. Perhaps this start served as the confidence boost that Mullins needed after a season-long hiatus due to a double-wrist injury. Mullins would quickly take charge of the race and pull a twenty second lead over the rest of the pack within the first three minutes of the race. 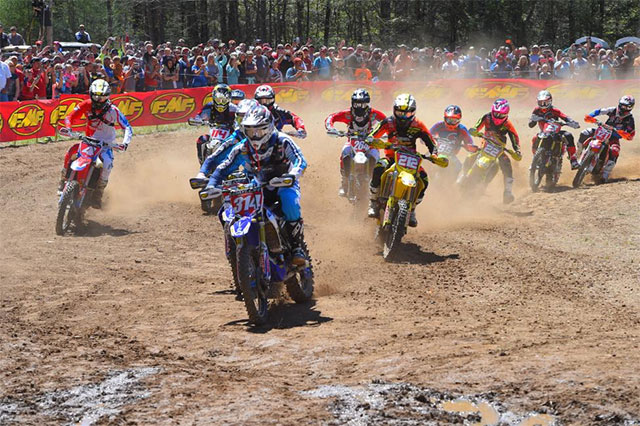 The XC1 Pro class put on quite a show for the Morganton, North Carolina GNCC fans. Photo: Ken Hill
While Mullins was facing a clear track, the rest of the XC1 Pro class was battling it out and quickly advancing on him. By the second lap, Russell had worked his way from the back of the pack to second place where he caught up with Mullins at the three mile marker. As the two were racing wheel-to-wheel, Russell was able to make the move for the lead in an open field section.

With a quick check back Russell turned his focus on extending his lead by valuable seconds. Mullins would eventually fade back on the third lap allowing for JCR Honda/Lucas Oil/Maxxis/FLY Racing's Chris Bach and Rockstar Energy Husqvarna Factory Racing/Bel-Ray's Josh Strang to slide by.

"It's awesome to get my first podium of the season," said Bach. "I had a decent start and was able to even lead a little bit of the race. I've been dealing with issues from my crash in Florida but I'm taking it race by race and we're finally back where we should be." 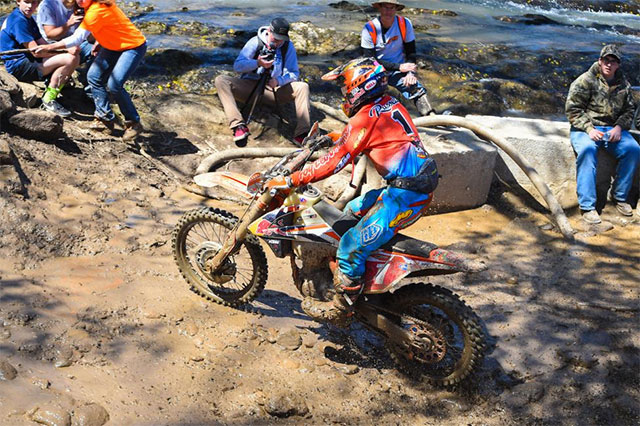 Russell captured the overall win and closes the points gap to just nine points. Photo: Ken Hill
After hitting a hole at high speed, Mullins was out of the race where he suffered from too much pain in his wrists. With a last lap pass, Strang was able to salvage extra points with a second place finish. Strang still continues to hold onto the points lead, with Russell sitting in second just nine points behind. Bach made his first podium appearance of the season where he rounded out the overall podium in third.

"I'm not happy with a second place after getting the first two wins," said Strang. "I struggled in the first half of the race and when I finally put it all together I was too far back. I'll take it for this round, but my plan is to be back in the middle of the box at Big Buck."

After a hard fought race, JCR Honda/Lucas Oil/Maxxis/FLY Racing's Trevor Bollinger came out with the XC2 Pro Lites win. The Morganton native took a hard hit during the race, but was able to recover and move back into the first place position. Following behind him was Coastal Racing/Husqvarna-backed Layne Michael in second. Coastal Racing/Husqvarna/MSR's Craig Delong jumped out to the early lead claiming the $100 Hot Cams Holeshot Award, but ultimately finished third. Connecticut's Benjamin Kelly and North Carolina native Trevor Barrett round out the top five.

"It feels great to get a win at my hometown race especially after the race I had," said Bollinger. "I just couldn't get a clean lap in the whole race, but it feels good to come out with another win and keep fighting for the championship."