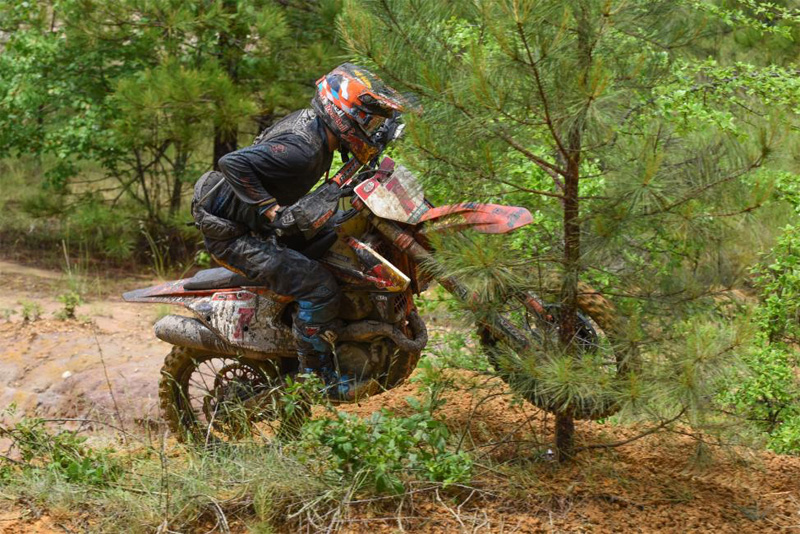 Lawrence County Recreational Park in Springville, Indiana, will host the sixth round of the 2016 AMSOIL Grand National Cross Country (GNCC) Series presented by Maxxis, an AMA National Championship, this weekend, May 14 and 15.

After a rough start to the season, Russell's recent results show that he finally has everything under control and will continue to be a contender for the overall win. Just last year Russell won the Limestone 100 GNCC, and will look to repeat his success this Sunday.

"Limestone is a nice track with some good dirt," said Russell. "Of course it's a riding park so there are a lot of different trails in all conditions. I'm just going to work hard during the week and go for another win."

Kailub Russell will aim to make it four-in-a-row this Sunday.Photo: Ken Hill

One rider who will have his eyes set on taking the win away from Russell will be Josh Strang. After having issues at the previous round, Strang fell to second in the points championship and will be eager to earn the white plate back this weekend. With two overall wins and four podium finishes, Strang has been Russell's biggest competition all year and will continue his fight for the National Championship this weekend.

Finishing just off the podium at the previous Camp Coker Bullet GNCC was JCR Honda/Lucas Oil/Maxxis/FLY Racing's Chris Bach. The Indiana native is no stranger to the track conditions present at the Lawrence County Recreational Park and will look to capitalize on his home turf advantage to take his first overall win of the season.

N-Fab/AmPro Yamaha's Daniel Milner, sitting fourth, is setting himself up for a season best finish. Milner has not made a podium appearance since landing a second place at the Wild Boar GNCC, and will attempt to turn his season around and find himself on the box at the conclusion of the three-hour race this Sunday.

After an impressive ride at the previous round, Westfield Powersports KTM Presented by Moose Racing's Jordan Ashburn now sits tied for fifth in the National Championship standings. Ashburn looks as if he has finally adjusted to his new bike and setup, and will continue to be a podium contender heading into Indiana.

Tied with Ashburn is Coastal Racing/Rockstar/Husqvarna's Ryan Sipes. Sipes was missing from the front row at the Camp Coker Bullet GNCC due to having surgery from an injury he sustained just a few weeks ago, but he will make his return this weekend as he continues his quest for his first podium of the year.

SRT/KTM/Kenda Tires' Steward Baylor holds the seventh place position as the GNCC series nears the halfway point of the season. Steward Baylor put in a standout performance at the last round finishing in the top five and will look to use that for motivation to earn his second podium of the season.

After sitting out the last round due to a shoulder injury, N-Fab/AmPro Yamaha's Grant Baylor will be starting on the first line again this week where he will look to salvage some extra points and move up in the points standings where he currently sits tenth.

In the XC2 Pro Lites division, JCR Honda/Lucas Oil/Maxxis/FLY Racing's Trevor Bollinger has been dominate this season winning four out the five rounds. Bollinger suffered an unfortunate mechanical issues at the last round, which resulted in him being towed out of the woods, but aims to improve his finish this Sunday and land a spot in the middle of the box again.

However, another rider who has put in consistent results is Coastal Racing/Husqvarna/MSR's Craig Delong. The Pennsylvania native has only finished off the podium once this season, but that finish was still in the top five. Delong will ultimately be a rider to keep an eye on this weekend as he strives to take home his first win of the season.

Much like Bollinger, Beta USA/Fly Racing/Kenda Tires' Jesse Groemm faced a mechanical issue in South Carolina. Groemm would be running his best race of the year when the incident occurred, and he will look to use that as motivation to claim his first XC2 Pro Lites class win of the year.

Coastal Racing/Husqvarna/MSR's Layne Michael comes into this round fresh off his first win of the season and is currently sitting fourth will be looking repeat his success. Beta USA/Fly Racing/Kenda Tires-backed Tegan Temple moves into Indiana with his eyes set on a podium finish.

Top Image: Kailub Russell will aim to make it four-in-a-row this Sunday.