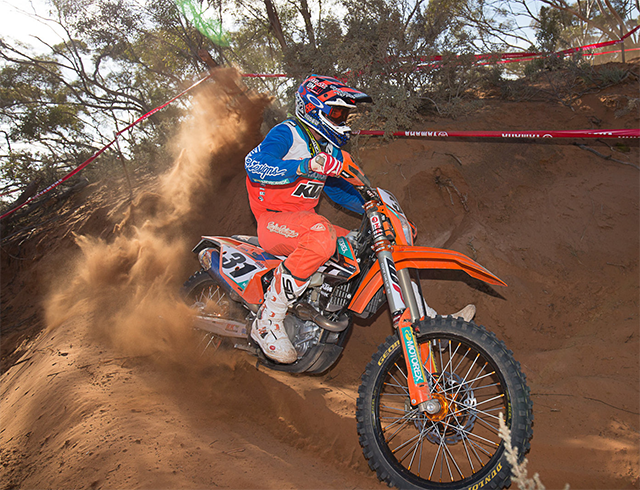 Round 8 of the Yamaha Australian Off-Road Championship (AORC) at Renmark, SA, was off to a flying start this morning, as the Senior class raced from the YZ 450FX Test Track for Sunday‰Ûªs Sprint.

The dusty conditions remained throughout the day of epic action. Although the conditions created a challenge for the riders, it forced the cream to rise to the top.

The E1, E2, E3 and Transmoto EJ within the Yamaha AORC are the 'go-to' destination for the nation‰Ûªs most elite enduro riders. Sunday‰Ûªs sprint racing consisted of four laps, the riders with the fastest accumulated times won the races. Winners were; Wil Ruprecht, Daniel Milner, Lyndon Snodgrass, and Fraser Higlett.

E1
It was a Yamaha one-two within the E1 class on Sunday. Active8 Yamaha Yamalube Racing Team‰Ûªs Wil Ruprecht took a well-deserved victory for Round 8. Ruprecht suffered injury back at (Miva, QLD) and his victory shows he has recovered very well, helping to solidify his championship lead. Ruprecht took just 36:55.387 to finish the four laps. Up next was Snap Fitness Yamaha‰Ûªs Scott Keegan. Keegan took the victory yesterday but didn‰Ûªt quite have the pace to match Ruprecht, he finished approximately 25 seconds behind Ruprecht with his 37:21.656. The final podium spot belonged to Tom Jones on his Yamaha, finishing in the same position as yesterday. Jones registered an accumulated time of 37:51.620.

E2
This weekend once again belonged to Daniel Milner of the KTM Enduro Team. Milner remains undefeated for Yamaha AORC in 2017. Milner described the successful weekend.

‰ÛÏThe racing was a lot of fun, Lyndon and myself have both enjoyed great results," Milner said. "I did all I could out there to win and we‰Ûªve got the right team to achieve those results. It was tricky out there and it got really powdery. It took a while to adjust to the conditions but it was awesome to be honest. There was a bit of hard packed down terrain that had a sharp edge to it. We‰Ûªre all dealing with the same conditions though, I just wanted to go out there, hit the sand and get the desired result!‰Û