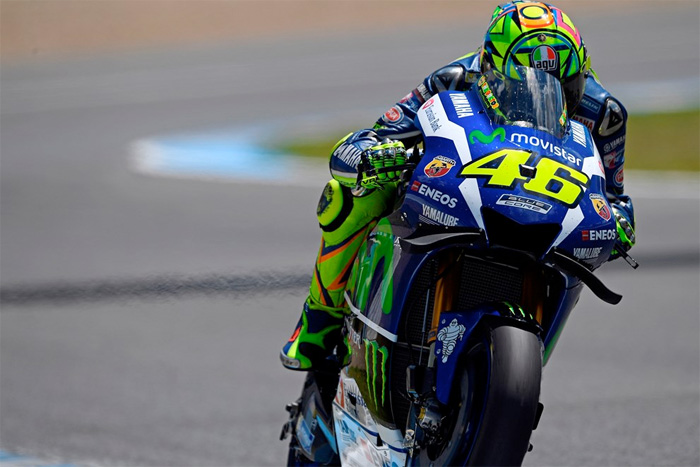 Movistar Yamaha MotoGP teammates Valentino Rossi and Jorge Lorenzo are eager to get aboard their YZR-M1s again for the fifth round of the MotoGP championship after a superb weekend in Jerez a fortnight ago, which ended with the first Yamaha 1-2 of the season.

The results of the last race and the successive test gave both riders an extra confidence boost ahead of the forthcoming Monster Energy Grand Prix de France to be held this weekend.

After a strong performance at the previous round, Movistar Yamaha MotoGP riders Jorge Lorenzo and Valentino Rossi are keen to put on a show again this weekend at the Le Mans Bugatti Grand Prix race circuit.

Having claimed his first victory of the season in Jerez, teammate Rossi is excited to start the fifth round of the championship and add another good result to his already extensive list of podium finishes at the Le Mans Bugatti circuit.

"Le Mans is a track where the YZR-M1 usually goes very well. The negative thing about Le Mans is the weather, it is always very uncertain." Rossi commented. "It can rain, it is often cold and so there are many factors that you must be careful of.

"Last year I had a good race but I was not able to beat Jorge, I'll try again this year.

"First we will start the weekend in the same way as we did in Jerez. There we found a good set-up on Friday and this has helped us to be competitive in the race. We will do our best also in Le Mans."

Having showed a very fast and consistent pace aboard his YZR-M1 during the Jerez test last week, the Mallorcan, who celebrates his 29th birthday today, is eager to challenge for a top result again this weekend as he aims to climb up the championship ranking order from his current second place.

"Jerez was a good race, not perfect because of the result, but at least we could add one more podium to our tally." Lorenzo said. "This season it's going to be crucial to keep scoring the maximum number of points every race, like we did in Jerez, so we can now focus on Le Mans, where we intend to do the same.

"France is often tricky because of the weather, so we need to be prepared in case it rains. Anyway my target is to try to get another podium and be a constant at the front, though it's still uncertain how we will be able to manage with the new tyres. Every race is different but we need to be focused the whole weekend and try to get the maximum from our package."

The Le Mans Bugatti Grand Prix race circuit was built in 1965 and forms part of the famous 24H Motos track, just a few kilometres from the city of Le Mans. MotoGP made its first visit to the iconic French track in the late sixties and it remained a fixed feature until 1996.

After the track underwent safety moderations it was added back on the calendar in 2000, yet the changes have not affected the visitors' experience. With an emphasis on late braking, hard acceleration and rear end traction, this circuit is the scene of a lot of racing action that more than 100,000 spectators can enjoy.