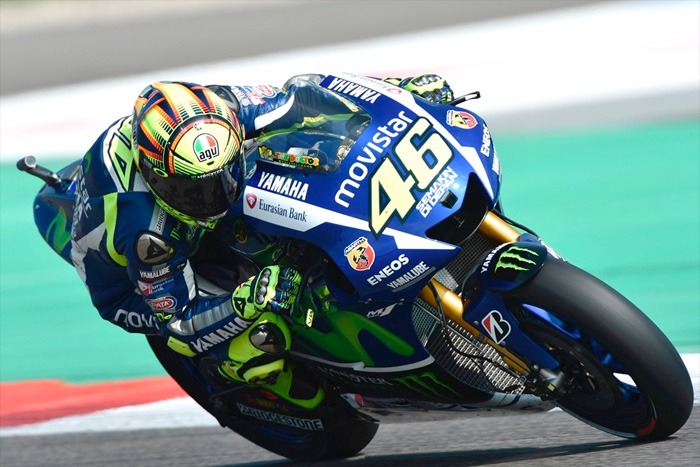 Movistar Yamaha MotoGP rider Valentino Rossi came out victorious today after a stunning race at TT Circuit Assen, that was decided in the final meters before the flag.

Rossi kicked off the Dutch Grand Prix from pole with a dream start to take the holeshot. He held a 0,426 advantage to Marc Marquez after the first lap. The Doctor tried to break away from his encroaching rival and the rapidly approaching Lorenzo and responded by dipping under the previous lap record, but was unable to shake his pursuers off.

Rossi had Marquez on his tail by lap four, but used his YZR-M1's nimble nature to the fullest to keep him at bay. He held on to his position until the Spaniard made his move going into turn one with seven laps to go, but the Doctor was far from defeated. Refusing to let his rival go he stuck close to Marquez and bided his time for four laps before retaking the lead.

The following laps had the fans on the edge of their seat. Valentino rode a personal best time on the penultimate lap of 1'33.673 to create a margin, but Marquez closed in on him in the second half of the last lap. 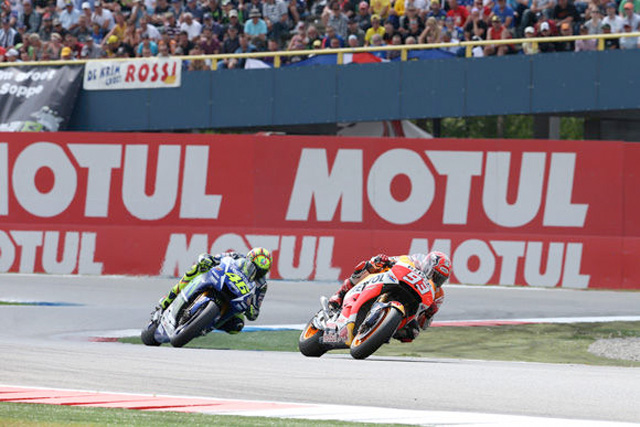 It was a battle all the way to the last corner for Rossi and Marquez
The crowd went wild when the Spaniard made his move going into the chicane for the final time clipping the side of the YZR-M1 and forcing Rossi to run straight through a patch of gravel. The Italian did well to hold on to the bike and reentered the track in front of his rival to take his third win of the season with a 1.242s advantage.

"I pushed, and I don't want to say I did a perfect race, but close." Rossi explained. "I saw I was not able to get distance from Marc. It's always difficult with him and you know the battle will be very hard, but I was confident that I was competitive and I wanted to try for victory.

"In the last laps I pushed a lot and I arrived at the last chicane when Marc tried to overtake but he arrived a little bit too late, I was already into the chicane and we touched a little bit and I had to cut the corner. Essentially I had no choice and I was lucky, because I got on the gravel, but I stayed on the throttle even though I didn't know how deep it was and I thought there was a chance I could lose control.

"When I returned to the track I checked the position of Marc, but he had slowed down more than I did.

"It has been a great weekend and it's very important because I increased my point advantage over Jorge. I think that in a championship as close as this, it is very important you take the maximum profit when you are competitive and when you like the track, because for sure we will have some more difficult moments.

"It was fantastic to come back here with a victory. I think we deleted the results of Jerez, where Jorge gained nine points over me and now we have to try to delete also Mugello's results where he did the same thing.

"Apart from the joke, it is very important because Jorge did fantastic to cut down a 28 points gap to just one. So to take nine points now is crucial, also because I think this championship will arrive to the last race and the last lap." 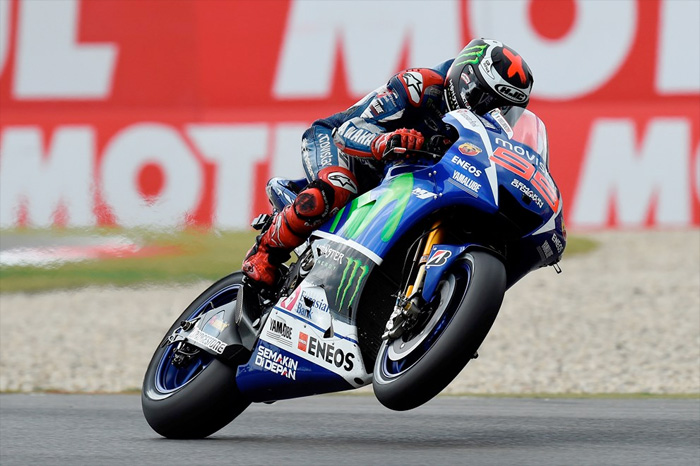 Jorge Lorenzo raced to a lonely third place finish.
It was a lonely race for Yamaha's Jorge Lorenzo. Starting from eighth on the grid he flew off the line, taking fifth in the first corner. With his teammate in his sights he had an incredible first lap and started to claw his way to the front. He overtook Aleix EspargarÌ_ and Pol EspargarÌ_ to finish the first lap in third, but the passes cost him valuable time.

The Spaniard put his head down to close the gap to Marquez in second place, but was unable to join the front-runners. With no other riders to spar with, he focused on managing the gap to the rider in fourth place and crossed the line 14.576s behind his teammate, claiming his fifth podium in a row.

"We are still ten points behind the leader, which is good." Lorenzo said. "It was 29 points after Argentina so now ten points after a difficult weekend that we had before a race is not so bad.

"I make a good start, I was really focused in the first lap to recover positions and did it faster than I expected, because I was already in third position when we crossed the finish line for the first time. I tried to keep up with the pace of Valentino and Marc, but they were really strong and I realized that today was not the day.

"Today was the day to fight and keep this third place, which is very good for the championship. If we struggle and still finish in third place, it's a good thing. Valentino was a little bit more competitive here from the beginning, Marc improved his bike and was more comfortable to keep up the pace and for us it was the opposite.

"We found that the harder tyre gave us a little bit more problems and in two sectors I couldn't be fast enough and lost so much time in sector two and four. In both I lost half a second and that made it impossible to have a good pace. The next race will be a bit more complicated at Sachsenring, because I've never won there, but you don't know what might happen." 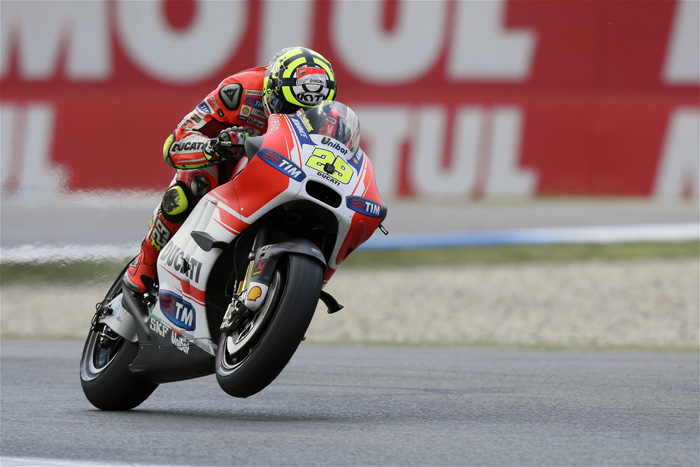 Andrea Iannone finished with a fine fourth place result
Andrea Iannone managed to score another good result with the rider from Abruzzo, who started from sixth place on row 2 of the grid, getting off to a good start and was fifth at the end of the opening lap.

On lap 3 he passed Pol Espargaro to move into fourth, a position he held until the chequered flag, and he ended the race with a five second gap to his Spanish rival.

‰ÛÏIt was a difficult race because when you aim for better results it‰Ûªs not easy to be satisfied with fourth, even if you score good points." Iannone said. "In the race I got off to a good start, unlike in the other rounds, but I was not able to run particularly well in the first three or four laps and I struggled to pass Aleix EspargarÌ_ right away, so I lost touch with Jorge, Marc and Vale.

"My race pace was similar to Jorge‰Ûªs so I could probably have tried to do a bit more. However we have to be pleased and satisfied because we managed to take home the best possible result today.

"I believe that we did a good job over the weekend, we ran a constant pace throughout the weekend and again we were able to work out the right direction to follow.‰Û 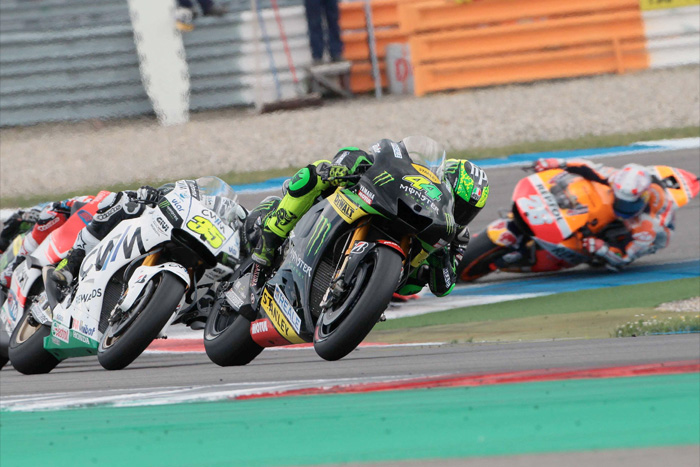 Pol Espargaro edged out a group of talented riders to round out the top five
Rounding out the top five was Monter Yamaha Tech 3 racer Pol Espargaro, crossing the line ahead of LCR Honda's Cal Crutchlow, team-mate Bradley Smith and Repsol Honda's Dani Pedrosa, will all four riders seperated by less than four tenths of a second.

"Of course, I have to be pleased with the fifth position today, yet it was a very tough race." Pol Espargaro commented. "Unfortunately, I had a lot of difficulties with my right forearm again, which I have recently had surgery on and the last six laps were particularly tricky.

"I ran wide in the fast corners and couldn't brake, so to be honest, riding like this was anything but easy. In the last three laps, I even started to think that I wouldn‰Ûªt be able to finish the race as I was convinced I would run wide and crash somewhere. Yet, I kept fighting and held my position until the finish line, but I just tried to be as big as possible in the last lap to make the others struggle to go past me as I had nothing more to give on the brakes.

"Therefore, beside the satisfaction of the good result, there is also some frustration because in this situation it will be tricky to continue racing due to the problem itself which is also painful. However, tomorrow we will fly, as scheduled, to our first test in Japan for the 8 hour race and face this new challenge after the good result here in the Netherlands."

The Suzuki pairing of Aleix Espargaro and Maverig Vinales rouned out the top ten in 9th and 10th places respectivley.

Australia's Jack Miller was taken out in the first corner via no fault of his own when he was hit from behind by Avintia Racing's Hector Barbera. 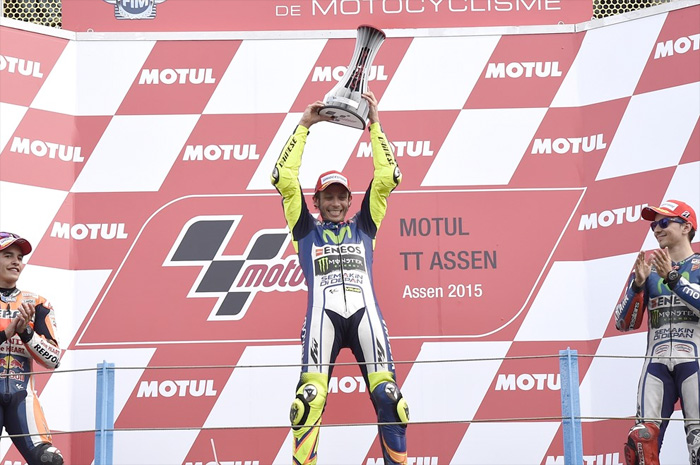 Top Image: Valentino Rossi on his way to his 111th GP win