The Maxxis/KLIM/DirtWise KTM Race team started the 2014 GNCC season with some big wins and strong performances from its team riders at Round one of the 2014 GNCC series held on the weekend. 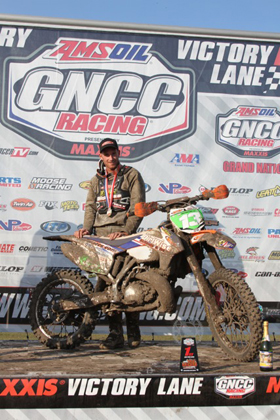 Rory Mead opened up the 2014 GNCC season with a win in the XC2 class.
Team rider, New Zealand's Rory Mead kicked off the series with a very calculated ride to take victory in the XC2 Pro class which solidifies him as the number 1 Championship contender for this class in 2014.

"I began the race steady and hooked up with my team mate Jesse early on the first lap when we were both back in the pack." Mead explained. "From there we just settled into a steady pace that took us to the front by the middle of the race, and then we started gapping the rest - it was just like another day at the practice track riding together!

"Jesse was riding really good but unfortunately he had a bike issue that took him out of the race with two laps to go, so from there I just focused on having two solid final laps which extended my lead out to over two and a half minutes."

Jesse Groemm had a heart breaking mechanical issue while leading with just over two laps remaining, but still was classified as finishing 19th in class, which gained him a few valuable points towards the Championship.

"I am gutted about the end result, but I have a lot of positives to take away from this race." Groemm stated. "I loved the track and the nasty conditions, plus my speed and endurance to win this class is not an issue.

"Despite giving up a heap of Championship points to Rory today I'm planning on coming back strong and challenging him not only for victories, but also for the Championship lead throughout the remainder of this year."

Team owner, and Offroad racing legend, Shane Watts was pleased with Mead's efforts while at the same time feeling gutted for Groemm's DNF

"I'm ecstatic for Rory's win but devastated by Jesse's dnf." Watts admitted. "Both of them were riding strong and established themselves as a notch above the rest which is where we were expecting them to be.

"Unfortunately Jesse's radiators got fully clogged with mud which resulted in all of the coolant being totally boiled out of the motor - the engine got so hot it melted all of the hoses and then eventually the piston.

"As a team we should have been better prepared for those kinds of track conditions and in identifying this issue as it developed. I need to take full responsibility for this dnf and now for developing the necessary cure so as this or any other problem doesn't arise again in the future."

XC1 class team rider Jason Thomas didn't have the start to his GNCC season as hoped. After being involved in the spectacular first corner crash that brought down several of the other top riders in the class, Thomas then charged into the front group of riders in a fine display of Euro grass track skills.

As the laps wore on things went downhill for the Welsh native with multiple crashes and then finally an engine that wouldn't re-fire from the strains of the demanding course.

"Things were looking good there earlier in the race, and then basically I just started riding like a donkey and crashing everywhere. I'm looking to redeem myself at round 2."Thomas stated.

"The bike was perfect and I'm very happy with my result, so once I get some more seat time after the long hard winter we had in Wisconsin I'm looking forward to getting right up front!" Herrington said.

"That was one of the toughest races I've ever done - I'm so happy the bike didn't miss a beat and kept on charging the whole race!" Humphreys had to say regarding the event.

In the morning Amatuer race, Watts himself took the Overall victory by something like 10 minutes.

"I really wanted ride in the Pro class in the afternoon race but it was important that I was on the sidelines to support our team riders in the Pro race." Watts explained. "The issues we had during that Pro race reinforces my decision to forego my own desires in order to give our Pro riders the best support possible.

"The morning race was a blast though and I had such a great time out there - going out and riding my KTM is a big priority for me in 2014 so I'm stoked that I still had the chance to do it at this race."

The Maxxis/KLIM/DirtWise KTM Race team now prepares for Rd. 2 of the GNCC series this coming weekend, March 16, in Georgia.