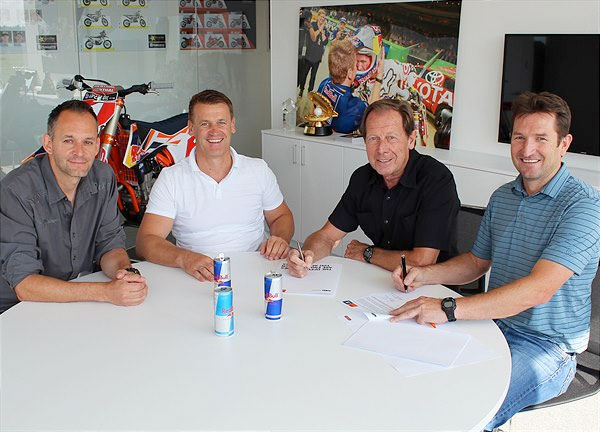 Jonas/Beirer/De Coster/Harrison sign new deal
Roger De Coster has been appointed to a new role for the KTM Group in a multi-year agreement with the Austrian brand.

The Belgian will be ‰Û÷Motorsport Director KTM/Husqvarna North America‰Ûª and retain a more strategic and senior position in all of KTM and Husqvarna‰Ûªs USA racing activities.

Ian Harrison has been Roger‰Ûªs ‰Û÷right hand man‰Ûª and key collaborator for a number of years ‰ÛÒ certainly since 2011 when De Coster first came to KTM ‰ÛÒ and has also renewed his position with the KTM Group to become de facto Team Manager of the Red Bull KTM MX/SX squad and Technical Director of the KTM/Husqvarna efforts in the United States.

The De Coster/Harrison link was largely fundamental in the reorganisation of KTM‰Ûªs sporting arm in high profile Supercross and Motocross circles at the start of the decade. The pair were instrumental in forging a close link with R&D in Mattighofen, Austria and elevating the race team to the position of champions.

Ryan Dungey‰Ûªs signature was key as was development of outstanding talent such as Ken Roczen and Marvin Musquin; KTM went on to toast titles and milestones in every AMA division. Recently, the alliance with Aldon Baker‰Ûªs training regime only strengthened the KTM Group‰Ûªs status and ensured the finest resources towards the current and next generations.

‰ÛÏI can still remember now when people said I was crazy to join KTM," De Coster recalled. "It has almost been ten years but it shows that when a company is as serious and dedicated about their racing as the KTM Group are then many things are possible.

"I‰Ûªm happy to again sign with them and to continue working with them to extend my long story in this sport," he continued. "We have achieved a lot together and I don‰Ûªt feel that the ‰Û÷fire‰Ûª is dimming or my motivation to keep this team and factory at the top of the sport is any less as the first day I wore the orange shirt. I‰Ûªd like to thank Mr. Pierer, Pit and all the guys who work so hard to allow us to be where we want to be.‰Û