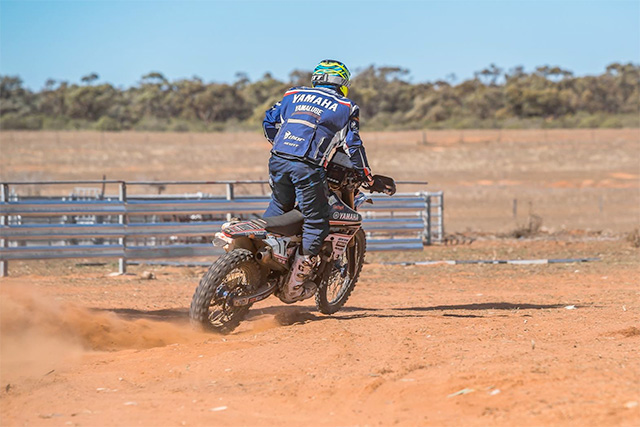 Off road motorcycle endurance ace, Rodney Faggotter, has added the 2017 Sunraysia Rally crown to his already impressive resume, when he claimed victory at the inaugural event recently.

Held around Mildura region in Victoria, the four day event is set to replace the old Australian Safari as the pinnacle in off road endurance / adventure racing in Australia and Faggotter was pumped to have his name etched first into the championships trophy.

Each day consisted of four stages with Faggotter taking control of the event early in the piece and winning over 60 percent of stages to stretch his lead out to 30 minutes by event end.

Seeded number 1 for the event, Faggotter found navigating his way around the rugged Victorian wilderness the most difficult as there were no marked tracks or riders to follow. None the less, he showed his true skill and went on to dominate the event on board his Yamaha WR450F.

‰ÛÏIt was pleasing to get the win and nice to get some real endurance racing under my belt before I head back overseas for racing in Peru and also the Dakar events early next year,‰Ûª Faggotter said.

‰ÛÏThe mornings were a bit cold for a Queenslander and there was a strong wind which was fun and challenging at the same time. If it was a cross wind, it was tough to ride but when we had a section that we rode with the wind, I was able to get up to 178ks an hour on the WR, which was awesome.

‰ÛÏWe had no bike issues at all and it was pretty much a dream run from start to finish.

‰ÛÏIt is also good at have another high-profile race back on the Australian calendar and hopefully this is the start of a long and successful event. Thank you to the organisers for the effort to make this happen,‰Û