Roczen Looks to Seize the Momentum After First Overall Win 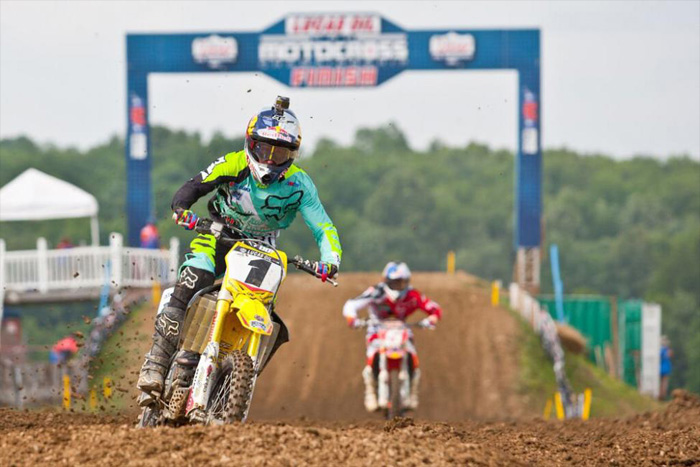 The 2015 Lucas Oil Pro Motocross Championship, sanctioned by AMA Pro Racing, observed its first off weekend of the season and following a week of rest, the world's best riders are set to converge on Southern Maryland's Budds Creek MX Park, in the shadow of the national's capital of Washington D.C.

This Saturday's GEICO Motorcycle Budds Creek National, on June 27 in Mechanicsville, will mark the halfway point of the 2015 season as the sixth stop of the championship.

While Red Bull KTM's Ryan Dungey maintains a comfortable points lead over the 450 Class field, RCH Soaring Eagle/Jimmy Johns/Suzuki Factory Racing's Ken Roczen hopes to ride a wave of momentum from his first overall win of the season at the series' previous round at High Point Raceway.

In the 250 Class, the balance of power has changed hands on four different occasions as Red Bull KTM's Marvin Musquin and Yamalube/Star Racing Yamaha's Jeremy Martin continue to trade the points lead. 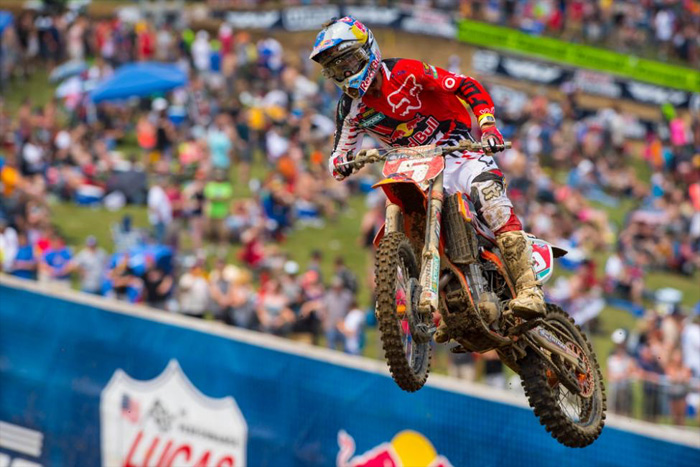 Dungey has been the most dominant rider at Budds Creek since joining the 450 Class in 2010. - Credit: Simon Cudby
Despite a stress fracture in his spine that put his hopes of a 450 Class title defense in doubt, Roczen has made consistent improvement since the opening moto of 2015 and has a firm hold on second in the points. He is currently in the midst of a nine-moto streak of top 10 finishes, highlighted by podium results over the last seven motos.

Roczen has managed to fight his way back from a 19th-place finish in the first moto of the summer, and a 12th-place position in the championship standings, to be right where everyone expected him to be as the reigning national champion. With a win finally under his belt at the new RCH team, Roczen can continue to build his late-blooming title defense.

While the defending titleholder is no doubt picking up the pace, it hasn't been enough thus far to gain ground on Dungey. As expected, the former two-time champion has been a picture of consistency thus far in 2015, serving as the only rider in the 450 Class to finish inside the top 10 in every moto and boasting nine podium finishes in 10 motos thus far.

If not for an unusual and uncharacteristic bike issue at Glen Helen, Dungey would likely have only podium finishes on his 2015 rÌ©sumÌ©. That rock solid consistency has resulted in a 37-point lead in the championship and to date, only two riders have managed to finish ahead of Dungey in an overall classification - Eli Tomac and Justin Barcia. Although he missed out on the victory at High Point to Roczen, Dungey finished the afternoon with equal points. 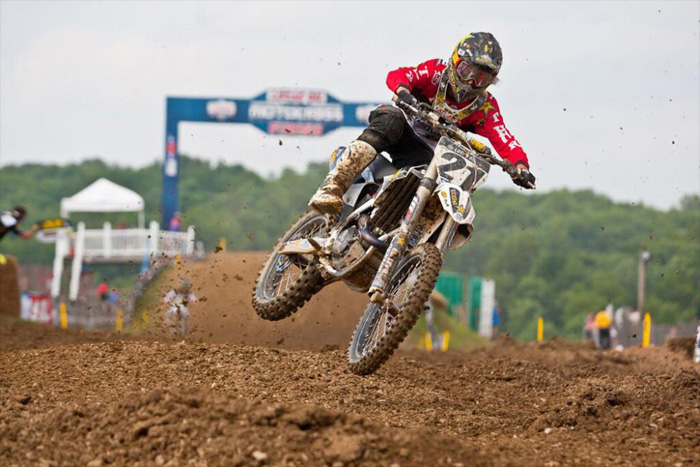 Anderson has vaulted into third in the championship thanks to a recent surge of strong finishes - Credit: Matt Rice
It was at Budds Creek a season ago that the hotly contested title fight between Roczen and Dungey began to change. Dungey managed to emerge with just his second overall win of the season and slowly started to chip away at the deficit he faced, leading to a battle that went down to the final lap in the final moto.

Roczen ultimately emerged triumphant in that battle and hopes for continued success as the series returns to the legendary facility, but based on history, Dungey will be the rider to beat on Saturday afternoon. In five career 450 Class starts at Budds Creek, Dungey has won four times, including three-straight wins dating back to the 2012 season.

Together, Dungey and Roczen's surge has opened a 35-point gap over the rest of the 450 Class field, leaving an intense three-rider fight for third. Currently, Rockstar Energy Husqvarna Factory Racing rookie Jason Anderson has control of the position thanks to back-to-back overall podium efforts.

However, both Autotrader.com/Toyota/Yamaha's Justin Barcia and fellow rookie Blake Baggett at Team Yoshimura Suzuki sit within five points of Anderson. Each of these three riders has at least one overall podium to their credit this season and are sure to continue trading spots up front. 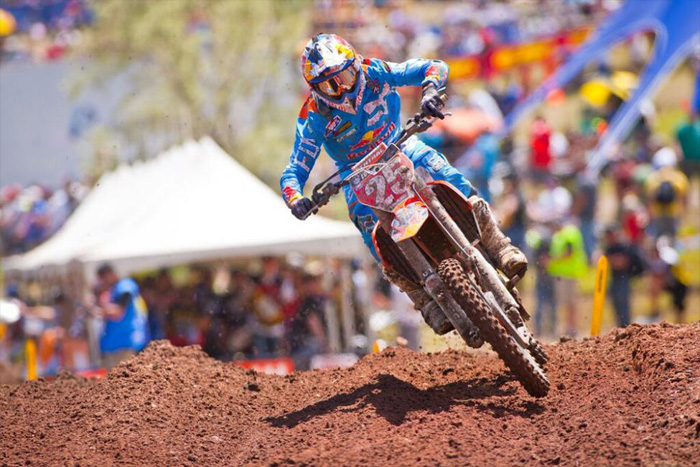 Musquin will carry the red number plate for the third time this season.- Credit: Matt Rice
Through five rounds, the 250 Class has been defined by the ability of both Musquin and Martin to capitalize on the opportunities presented when the other faces adversity. The pair started the season on equal footing, tying for the win at Hangtown with the tiebreaker going to Martin.

However, the following round Martin endured arguably his toughest outing of the season, allowing Musquin to seize control. Just a week later, the tables turned back into Martin's favor and once again the points lead changed hands. Things stayed status quo at the fourth round, but once again changed hands again thanks to a dominant day from Musquin combined with a trying afternoon for Martin. Heading into Budds Creek and the pivotal halfway point of the season, only eight points separate the two.

Every moto win thus far in 2015 can be attributed to this duo, but Musquin's six compared to Martin's four is proving to be the biggest difference maker at this point. While Martin has managed to finish inside the top 10 in every moto this season and is the only rider in the division to do so, he's had his worse days when Musquin has been at his best.

In his two 1-1 moto sweeps this season, Musquin's dominance was accompanied by 5-6 and 4-4 results from Martin, resulting in significant point swings that allowed the Frenchman to take over the points lead each time. 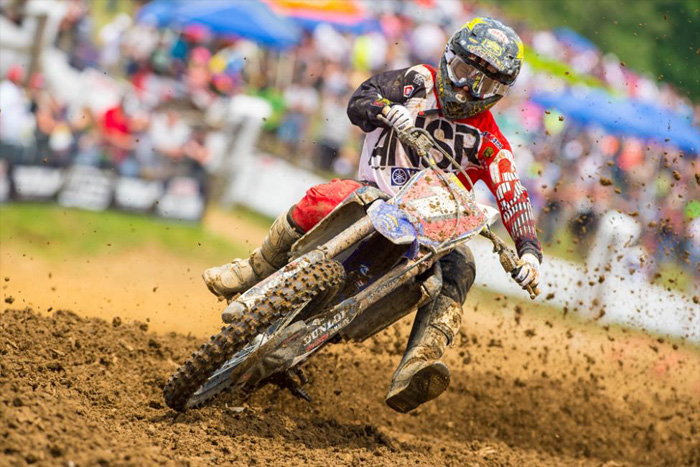 Martin will look to bounce back from a frustrating afternoon at High Point where he failed to finish on the podium in either moto - Credit: Simon Cudby
Neither rider has ever won at Budds Creek, adding a level of intrigue to Saturday's action. It's anyone's guess as to which of these two will have the edge this weekend, and it's anyone's guess as to which rider will step up to the plate to challenge the lead pair.

Several riders have made their presence felt on the overall podium in 2015 - a total of seven to be exact - but currently Troy Lee Designs/Lucas Oil/Red Bull/KTM's Jessy Nelson and Monster Energy/Pro Circuit/Kawasaki's Adam Cianciarulo are in a position to make the biggest impact as they battle for third in the championship standings. Just three points separate the two, who both hold a 7.3 finishing average.

Australia will once again be well represented by the honda privateer duo of Hayden Mellross and Jackson Richardson in the 250 class.

Mere miles from the Wicomico River and in the shadow of our nation's capitol of Washington D.C., Budds Creek sits nestled inside a natural-terrain amphitheater in the rolling hills of Southern Maryland. Since hosting its first Lucas Oil Pro Motocross Championship race in 1989, Budds Creek has been the site of some of the most memorable moments in the history of the sport, including the 2007 Motocross of Nations, affectionately called the Olympics of Motocross. With its fast, fluid layout and dirt that features a mix of sand and clay, Budds Creek is a track that can challenge riders all day long.

The GEICO Motorcycle Budds Creek National gets underway this Saturday, June 27, and will air on delay in Australia on Sunday the 28th of July at 3.30pm EST on Fox6 (506)

Top Image: Can Roczen turn his first overall win of the season into a string of success?