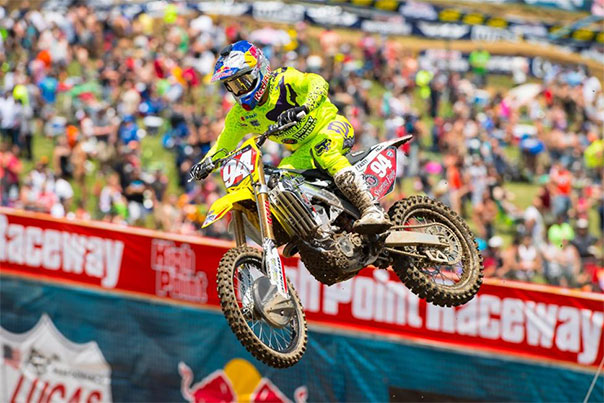 The career-best start to the 2016 season continued for 450 Class points leader Ken Roczen, who swept the motos for the third time this season aboard his RCH Soaring Eagle/Jimmy John's/Suzuki Factory Racing machine to claim his third overall victory in four rounds. In the 250 Class, points leader Joey Savatgy secured his third win of the season for Monster Energy/Pro Circuit/Kawasaki, edging out Rockstar Energy Husqvarna Factory Racing's Zach Osborne via tiebreaker.

Roczen made things easy in the opening 450 Class moto by racing to the holeshot over Monster Energy Kawasaki's Eli Tomac and Rockstar Energy Husqvarna Factory Racing's Jason Anderson. While Roczen looked to sprint away with the open track ahead of him, Tomac and Anderson jockeyed for second, with Tomac eventually securing the position. 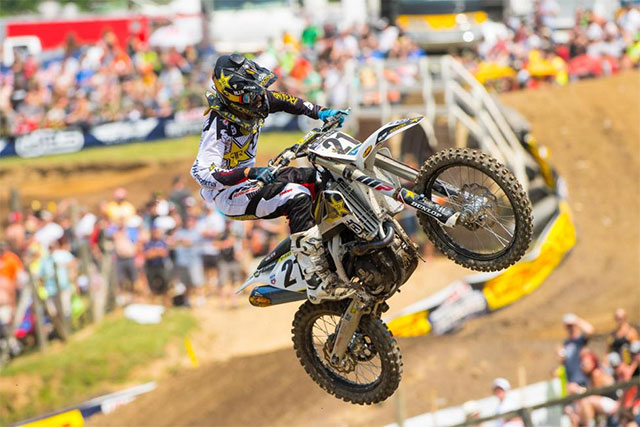 Jason Anderson enjoyed the best finish of his 450 Class career. Photo: Simon Cudby
With last week's announcement that defending 450 Class Champion Ryan Dungey, who was second in points coming into High Point, would miss 6-8 weeks with a cracked vertebrae, Tomac, who sits third in the standings, was expected to assume the role of Roczen's primary challenger. As a result of his best start of the season, Tomac was poised to do just that and challenge Roczen for the win, but a tip over on Lap 2 forced him to drop back to sixth.

Anderson assumed control of second following Tomac's trouble but only held on to the position briefly before encountering his own bit of misfortune, dropping to fifth. That allowed Red Bull KTM's Marvin Musquin to move into second, followed by Team Honda HRC's Cole Seely in third and Rockstar Energy Husqvarna's Christophe Pourcel in fourth, just ahead of Anderson and Tomac. While Roczen enjoyed a healthy lead out front, this group of five riders sat within just a couple seconds of one another for several laps. Musquin eventually opened some distance on his competitors while Anderson began his march back towards the podium.

After losing his hold on fifth to Tomac, Anderson reclaimed the position and proceeded to also pass his teammate Pourcel for fourth on Lap 5. He closed in on Seely for third and patiently waited for his chance to make a move, passing for third on Lap 9. Seely would crash a few laps later while running fourth.

The top three remained unchanged through to the finish, with Roczen taking a wire-to-wire win by over 14 seconds ahead of Musquin, who posted a career-best result in second. Anderson was third, with Pourcel fourth and Tomac fifth. 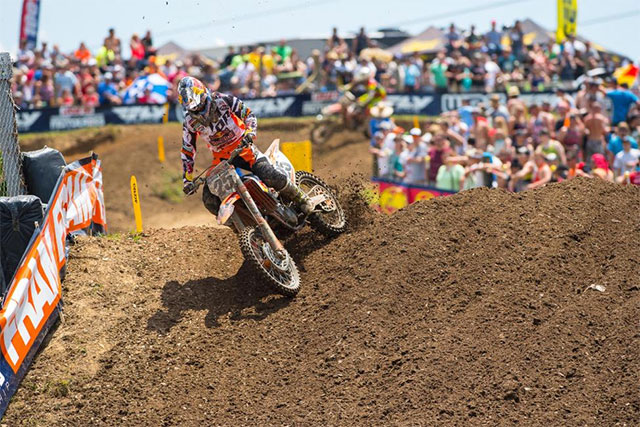 Marvin Musquin earned his first podium result in the premier class. Photo: Simon Cudby
When the gate dropped on the second moto it was Autotrader/Monster Energy/Yamaha's Justin Barcia who emerged with the holeshot over Roczen, with Anderson, Musquin and Tomac in tow. Barcia kept Roczen at bay for the majority of the opening lap, but the German rider made the pass for the lead just prior to the final corner and never looked back.

Barcia soon came under fire from Anderson for second, losing the position on Lap 1, and then battled Tomac for third, falling out of podium contention on Lap 2.

After taking third from Barcia, Tomac then set his sights on Anderson in second and needed just one lap to take over the runner-up spot on Lap 3. By the time he got to second Tomac faced a multiple second deficit to Roczen, and while he valiantly erased a couple seconds off that lead, it was too much to overcome. Roczen cruised to his seventh moto win in eight attempts this season, taking the checkered flag just over two seconds ahead of Tomac. Anderson rode to a solid third-place finish, with Musquin in fourth.

Roczen's third 1-1 moto sweep of the season gave him the ninth 450 Class win of his career. He becomes the first back-to-back winner at High Point since Ricky Carmichael in 2006 and 2007.

"I was pushing 100 percent out there, but also not really. I didn't want to be out of control because the track was difficult," said Roczen. "There were a couple areas on the track that cost me some time [to other riders], but I just stuck to what I was doing. It was warm out there, but we got the starts we needed and I was able to ride my own race." 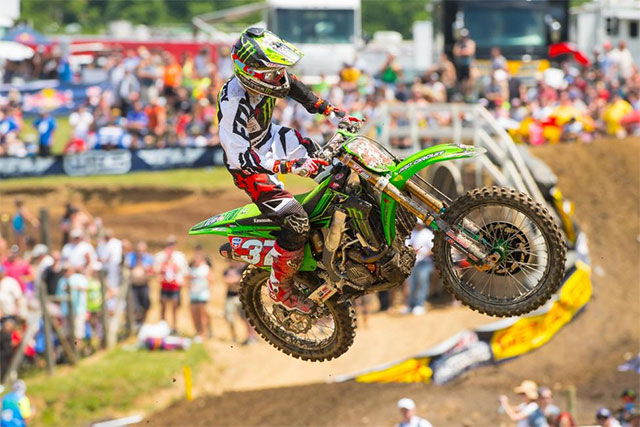 Joey Savatgy needed a tiebreaker to earn his third victory of the season. Photo: Simon Cudby
Anderson earned his first overall podium result of the season and the best finish of his career in second (3-3), while Musquin enjoyed his best day as a rookie in the 450 Class thus far, finishing third (2-4). Tomac just missed out on a fourth straight podium result in fourth.

"It was a consistent day today. I was 3-3 for second overall, which is great," said Anderson. "I just really want to stop getting outrun by those guys up front, so we need to keep working hard during the week to try and get up there."

In Dungey's absence, Roczen's lead in the 450 Class standings grew to 41 points over Tomac, who moved past Dungey into second. Dungey still sits third, but Seely and Anderson are both in position to surpass him at the next race, sitting 15 and 18 points out of third, respectively.

"The second moto was a good ride for me, but that first moto really cost me," said Tomac. "I crashed and lost some spots, and just couldn't get into the battle up front. I don't know what's wrong with me this year, but we need to make a charge and get up there with Kenny [Roczen]. We'll do some work and come back next week." 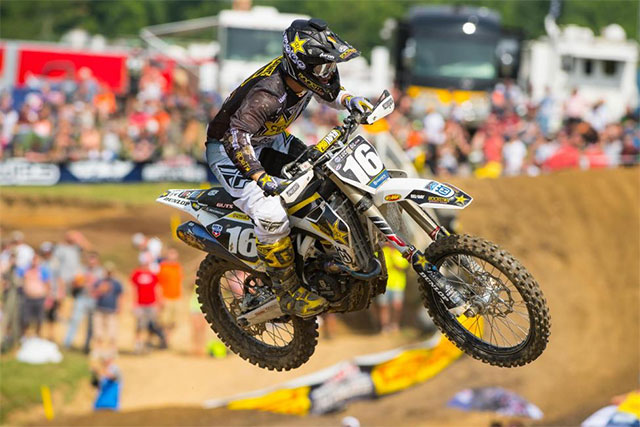 Alex Martin's early momentum vaulted him past his younger brother and into the lead. The top three remained mere bike lengths from one another throughout the course of the opening laps, with Osborne able to get past Jeremy Martin for second on Lap 1. After starting eighth, Savatgy was forced to fight his way through the field.

Alex Martin and Osborne set a strong pace out front, which allowed them to pull away from Jeremy Martin. The lead duo engaged in battle for the top spot for several laps, with Osborne moving to the point on Lap 6 following a small mistake by Martin that forced him off track briefly. Despite losing the lead, Martin kept the pressure on Osborne, setting the stage for an exciting battle for the win.

In the late stages of the moto Martin's bike began to expel white smoke, suggesting a potential problem with his engine. His speed reduced dramatically and he was unable to complete many of the track's larger obstacles. Despite the issue, Martin continued to log laps in hopes of soldiering home to the finish with points. He lost second place to his brother Jeremy on Lap 13, and then fell to fourth after getting passed by teammate Cooper Webb the following lap. His bike lost power on Lap 15, resulting in a DNF.

Out front, Osborne raced to the first moto win of his career, just over four seconds ahead of Jeremy Martin. Webb finished third, while Savatgy made a resilient push to finish fourth. Monster Energy/Pro Circuit/Kawasaki's Austin Forkner was fifth. Alex Martin finished out of the points in 30th. 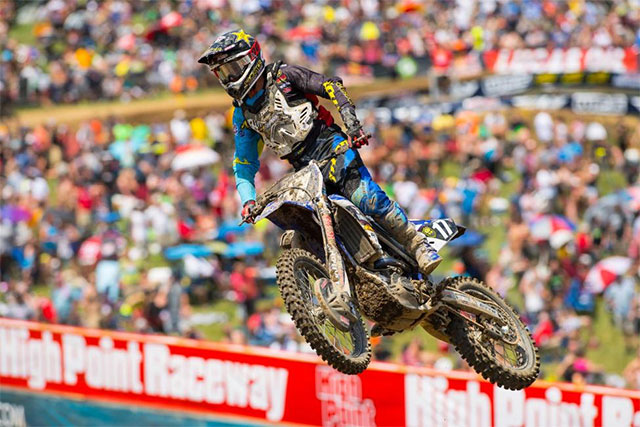 Cooper Webb finished on the podium for the third time this season. Photo: Simon Cudby
Monster Energy/Pro Circuit/Kawasaki's Adam Cianciarulo claimed the holeshot to start the second moto, just ahead of Jeremy Martin, Osborne, and Savatgy. A small mistake by Osborne allowed Savatgy to take over third, starting an impressive run to the front of the field. Savatgy moved past Martin for second on Lap 3 and immediately applied pressure on Cianciarulo. Savatgy took over the lead from his teammate on Lap 4.

As this was taking place, Alex Martin was making a determined effort to bounce back from his misfortune in the first moto. After starting fifth, Martin marched forward, passing Osborne for fourth on Lap 1 and following Savatgy past his brother into third on Lap 3. He wasted little time in getting around Cianciarulo for second once Savatgy took the lead, setting up a head-to-head battle for the win between the championship's breakout riders.

The top two pulled away from the field as Cianciarulo continued to fall back, giving up third to Jeremy Martin on Lap 5. However, shortly after moving into podium position Martin encountered the same concern with his motorcycle as his brother experienced the previous moto. He lost third place to teammate Aaron Plessinger and continued to fall back dramatically before his bike stopped running on Lap 9, resulting in a DNF.

Out front, Savatgy fended off consistent pressure from Alex Martin for the remainder of the moto to take the win by just over a second. Plessinger followed in third, with Osborne fourth. 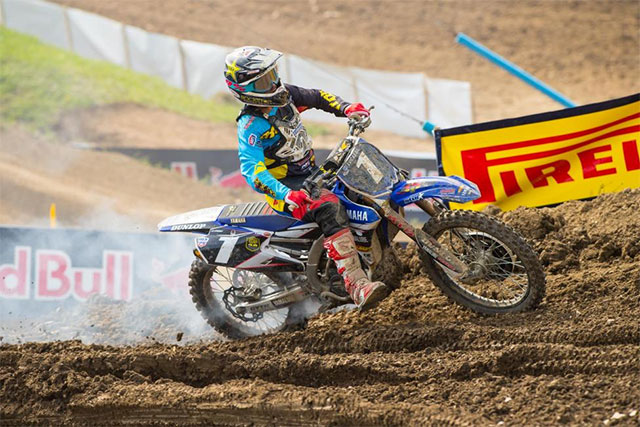 White smoke from their motorcycles affected both Jeremy Martin (pictured) and Alex Martin, resulting in DNF's for both riders. Photo: Simon Cudby
The identical moto results of Savatgy (4-1) and Osborne (1-4) resulted in a tie atop the overall classification. However, by virtue of his win in the second moto Savatgy earned his third victory of the season via tiebreaker. Webb, who finished fifth in the second moto, rounded out the overall podium (3-5).

"The first moto was not so hot. It was my fault, and if we're going to be in this for the long haul [battling for the championship] we need to eliminate those mistakes. But the second moto was great, my bike got off to a great start and my teammate, Adam [Cianciarulo], was finally up there with me and that was cool. It's a great feeling to have the red plate [as points leader] for another round."

"I feel great right now [finishing second]. It took me a bit in the second moto to get going, maybe I was a little nervous, and I let some guys get by me early," said Osborne. "That ultimately made the difference in the overall [results] and I just came up a couple seconds short [of another pass] for the win. It's been a huge day for me and a huge step in the right direction."

The fourth career win by Savatgy helped extend his lead in the championship standings, meaning he will be the first rider of the 2016 season to carry the red number plate for consecutive rounds. He holds a 20-point lead over Webb, who moved from fourth to second following the misfortune experienced by the Martin brothers. Jeremy Martin fell one spot to third, 24 points out of the lead.

The 2016 Lucas Oil Pro Motocross Championship continues next weekend for the fifth round of the season. Muddy Creek Raceway in Blountville, Tennessee, will host the Red Bull Tennessee National on Saturday, June 25.