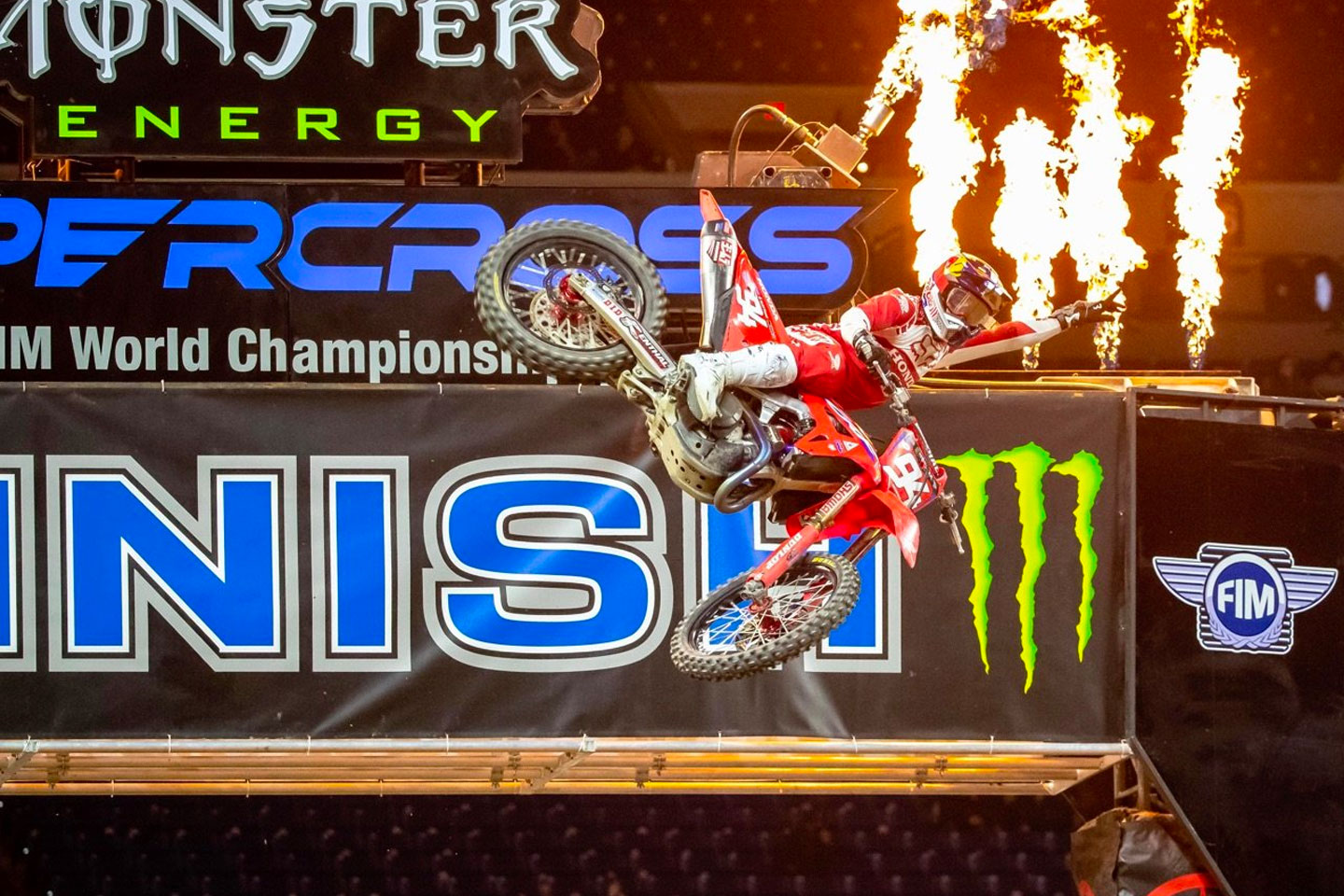 Ken Roczen was picture perfect, making his second win of the season look nearly effortless. Photo Credit: Feld Entertainment, Inc.
Round 5 of the Monster Energy AMA Supercross thrilled the limited fans inside Lucas Oil Stadium where Ken Roczen backed up his 450SX Class win at Round 4 with a dominating victory at the second Indianapolis round.

Opening round winner Justin Barcia held off defending champion Eli Tomac to fill out a podium of 2021 race winners. Action in the Eastern Regional 250SX Class presented plenty of drama, but when the dust settled it was Colt Nichols grabbing his third straight win to extend his points lead.


After four rounds with four different winners, the first repeat victor emerged when Ken Roczen, who easily won his heat race, jumped into the lead shortly past the holeshot stripe and gapped the field on the rutted, technical track. Holeshot winner Justin Barcia was comfortably in second until the race clock ticked down to the eight-minute mark in the 20-minute plus one lap race when Eli Tomac reached his rear wheel. Barcia managed to fend off Tomac's repeated attacks without losing much time on the leader, who'd stretched the lead to nearly ten seconds.

Tomac spent a night fighting forward, seeming to get caught up in other riders' paces as he'd reach them. He still managed third place points for the night, keeping him squarely in the title hunt. 2019 champion and Round 3 winner, Cooper Webb rounded the first lap mid pack; he climbed up through the field a notch slower than Tomac, reaching fourth before the checkers flew on the second of three Indianapolis races.

"I don't know what to say," Roczen said from the podium. "I haven't gone back-to-back in a really long time. I had a blast out there, luckily i just rode my own race and that was really key with this kind of track. I had some really creative lines and just made it happen." 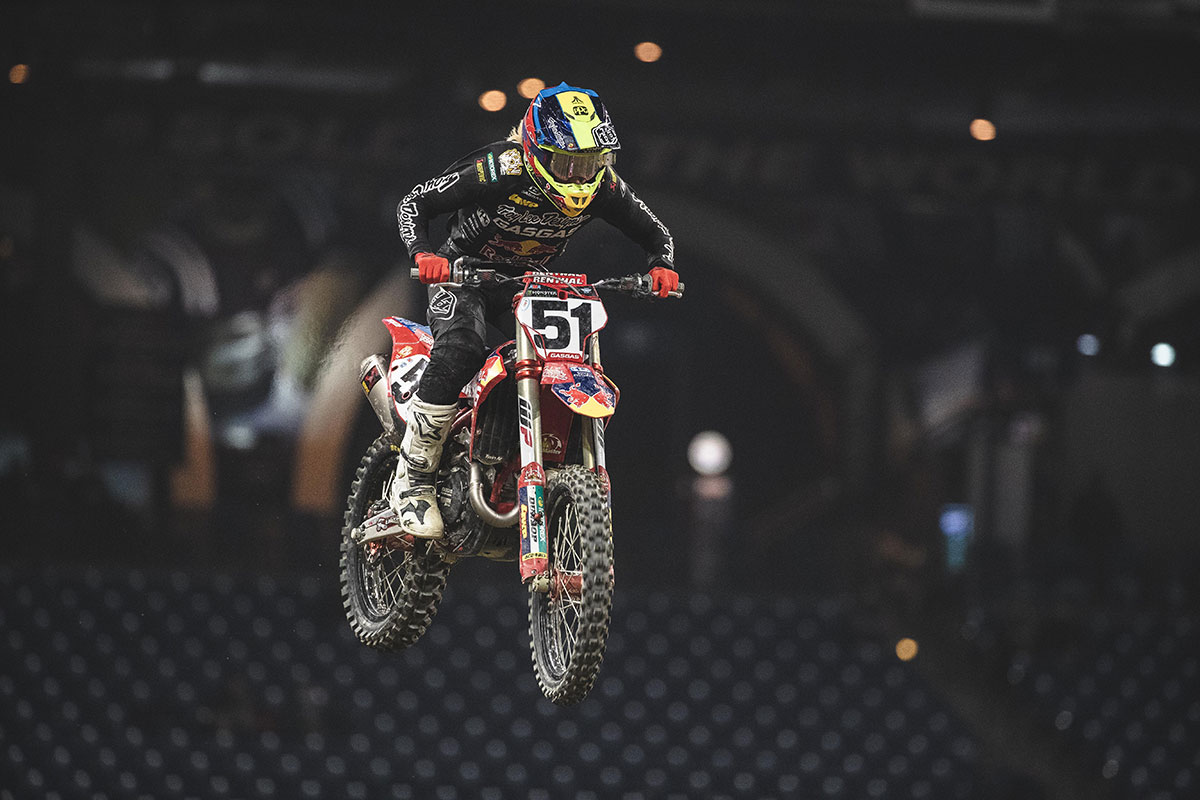 Justin , Barcia was consistently fast and up front all night in the premier class concluding the night with second-place finish. Photo: Align Media
Second place sees Barcia has now moved up to fourth overall in the championship standings.

‰ÛÏThe last round was really tough but tonight we put ourselves in a much better position," Barcia said. "I got a good start and Kenny rode an amazing race, I tried to give him a little battle in the beginning but that‰Ûªs all I had tonight. I‰Ûªm glad to be back up here on the podium, we‰Ûªve been searching a little bit with setup but we‰Ûªre getting there and feeling good, ready to get back to winning.‰Û 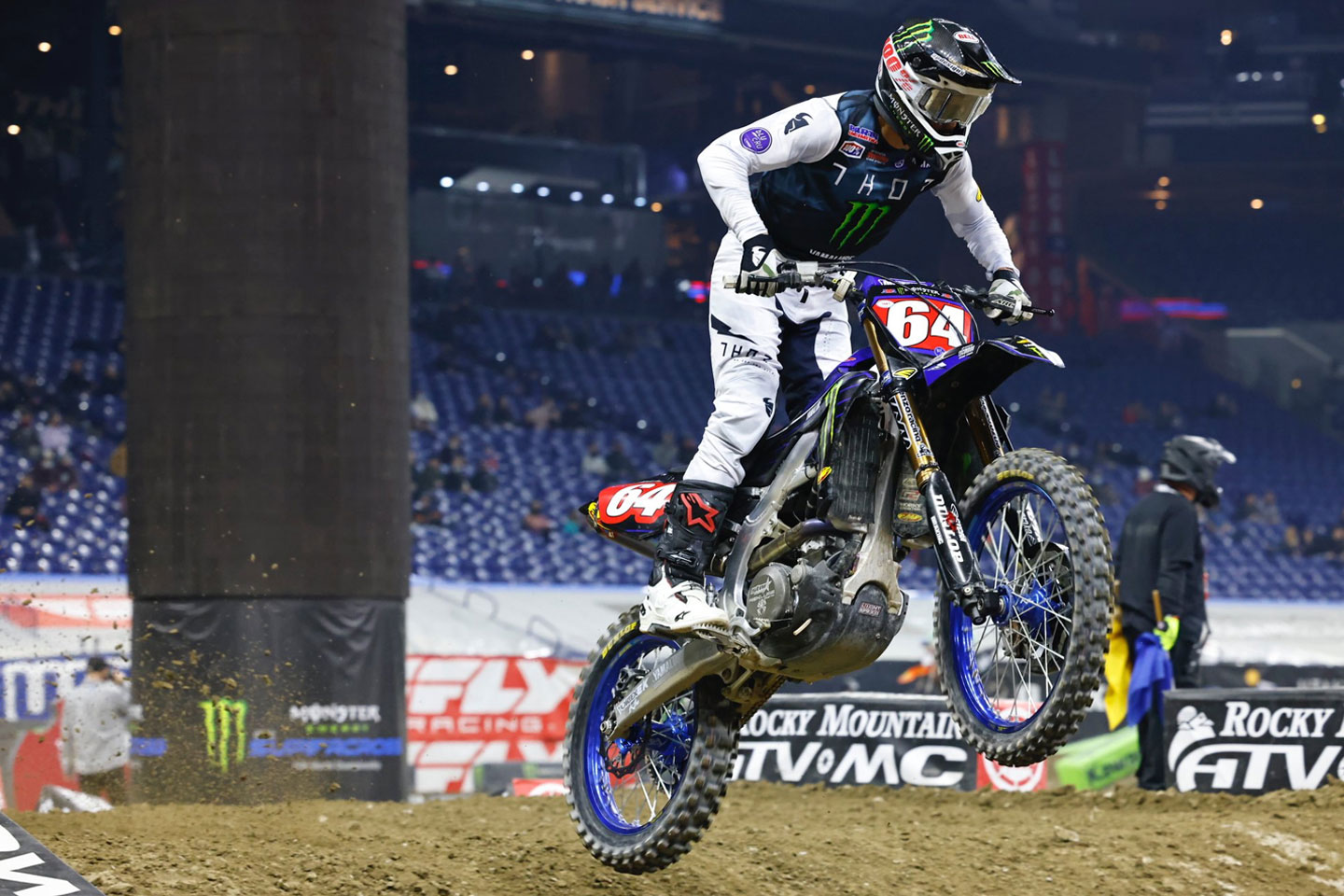 Colt Nichols had the speed and the starts to stretch out his points lead and claim his third straight 250 class win. Photo Credit: Yamaha
It was a wild night for the Eastern Regional 250SX Class riders but at the checkers, it was Colt Nichols grabbing his third consecutive win ‰ÛÒ only his fourth career win. It was Michael Mosiman who grabbed the holeshot and started to pull away in the opening laps. He'd earned GASGAS its first 250SX podium one race before and looked destined to give the brand its first win in its debut Supercross season. Unfortunately, a lapped rider crashed on a rhythm section; Mosiman ploughed into the rider and had to nearly stop to swerve around the downed bike. Nichols took the opportunity to grab the lead and never looked back‰Û_ until crossing the checkered which seemed to the riders to come out one lap early.

Christian Craig rode steady and managed second after passing Mosiman with just over five minutes left on the race clock.


"I want to come in and win these races and win this championship and I knew if I cam in healthy i would have a good shot," Nichols said. "It's been fun battling with Christian and it's unfortunate that Jett didn't get to lineup and a few others were out but I have had my fair share of that. I'm soaking it all in and loving this moment right now and just trying to enjoy it day by day. I struggled a little bit at the start of the main and Michael kind of got away from me but I was able to clean it up really well and was able to get a win, so I can't complain." Nichols said from the podium. 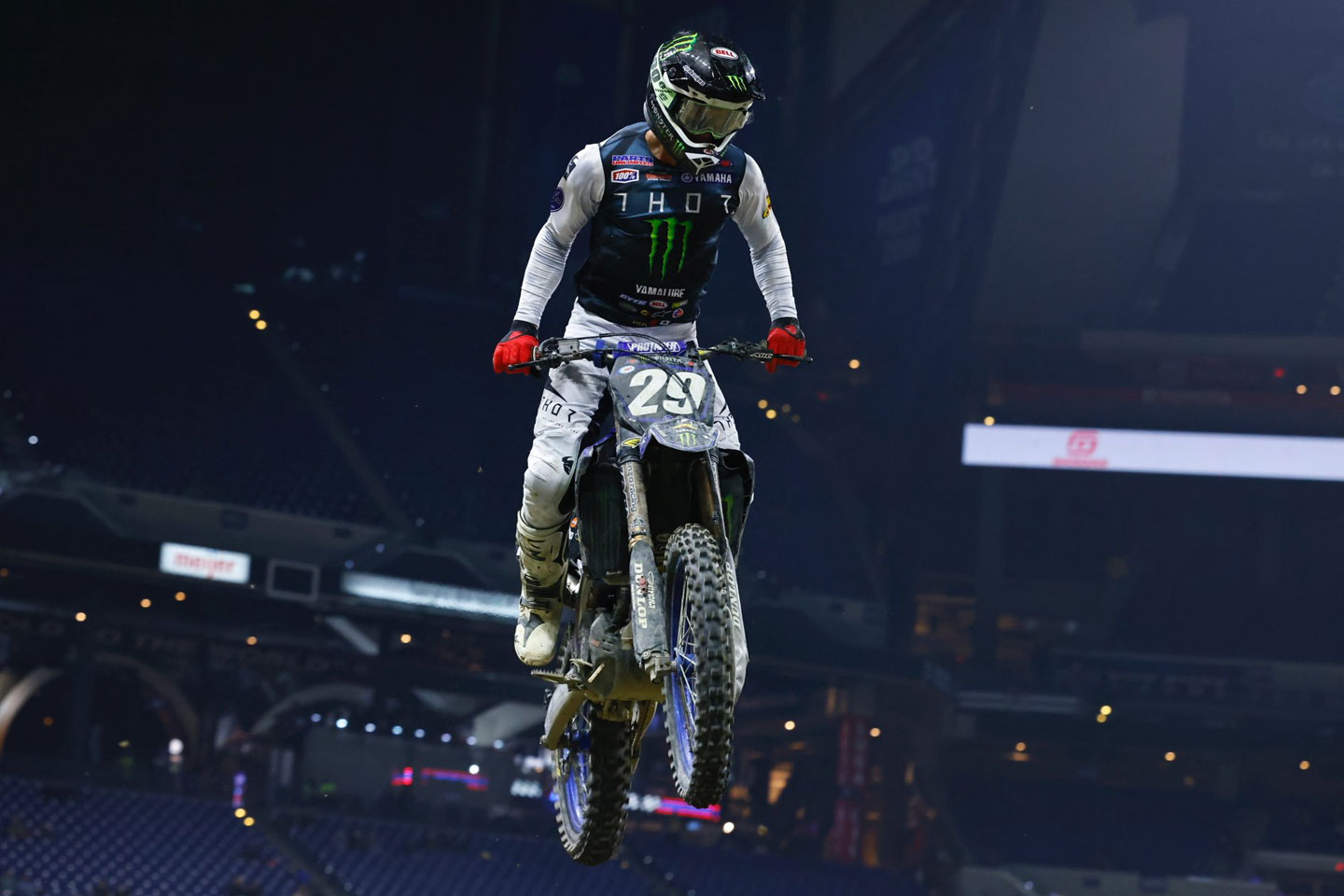 Second place was enough to keep Christian Craig within 11 points of his teammate in the title chase. Photo: Yamaha
Christian Craig still has a good chance at the title being second in the standings but knows he has to lift his game.

"I gotta stop Colt from getting on this roll, he is on a mission and he puts himself in a good spot," Craig said. "I need to out start him and just get right in front of him. I got onto him but made a couple of mistakes and he got away. It's going to come down to the wire no matter what and I am there for it. I really want this, it feels good after Saturday to rebound in second but it would have felt better to get the win," Craig concluded.

Absent on the line was Australian Jett Lawrence, who took a hard fall in practice and another in his heat race. After winning the Last Chance Qualifier, Lawrence determined he was not healthy enough to race with what appeared to be a right shoulder injury from his heat race crash; the 2021 race winner walked away from his bike on the line before the gate dropped.

Lawrence's withdrawal was a bonus for Mitchell Oldenburg after he crashed out of his heat when his engine locked up while trying a double, and then not being allowed to start the LCQ because officials wrongly thought the team had changed the frame. In the end, he was given Lawrence's spot, but ultimately DNF's with another problem.

With the second-ever SuperTuesday race in the books, the riders will line up on a brand-new track inside Lucas Oil Stadium this Saturday, February 6th for the final event of the Indianapolis triple-header. 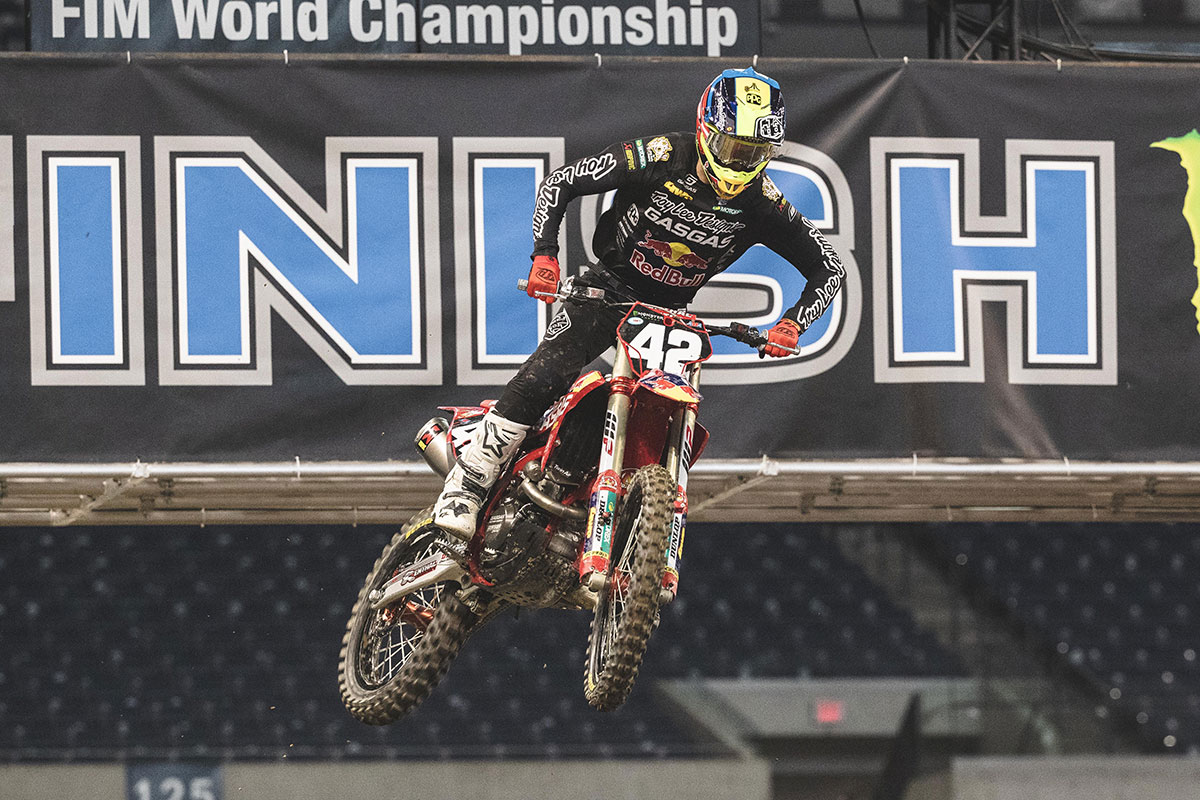