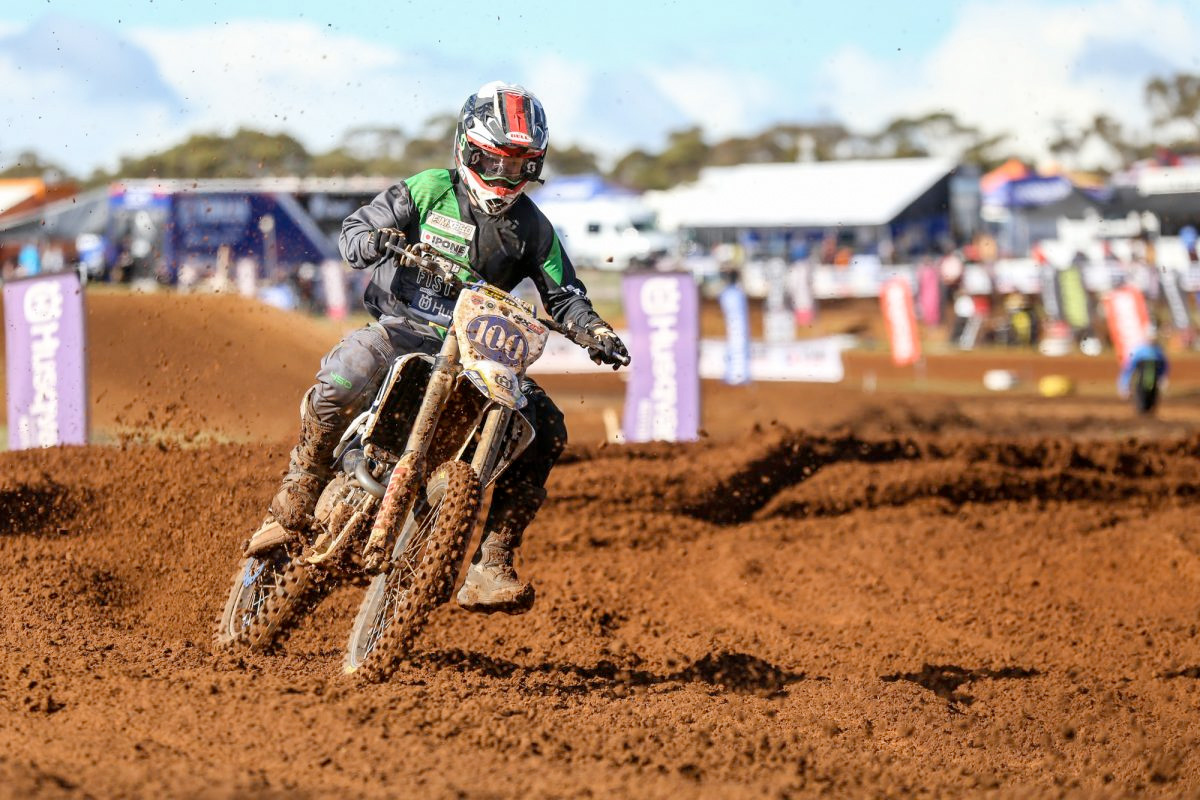 Husqvarna mounted Jy Roberts made it two Pirelli MXD round wins in a row and was rewarded with the red plate for the first time this season, thanks to consistency at Round 5 of the Motul MX Nationals held at Murray Bridge in South Australia today.

Roberts, who has gotten more impressive as the season has progressed collected yet another victory this afternoon and brought home valuable championship points as the season heads in to the mid-season break.

Round 5 got started in chilly conditions at Murray Bridge this morning, and with the track ripped deeper than in previous years, when racing got underway it was one of the best prepared circuits so far this season.

When the Pirelli MXD class took to the track for qualifying this morning, newly re-branded SD3 Husqvarna‰Ûªs Kaleb Barham showed that he was in South Australia for business, setting the fastest time with a 1:50.470. Second quickest on track was former red plate holder Cooper Pozniak (1:50.538), while Round 4 winner Roberts secured third pick of the grid thanks to a 1:50.840 lap time. 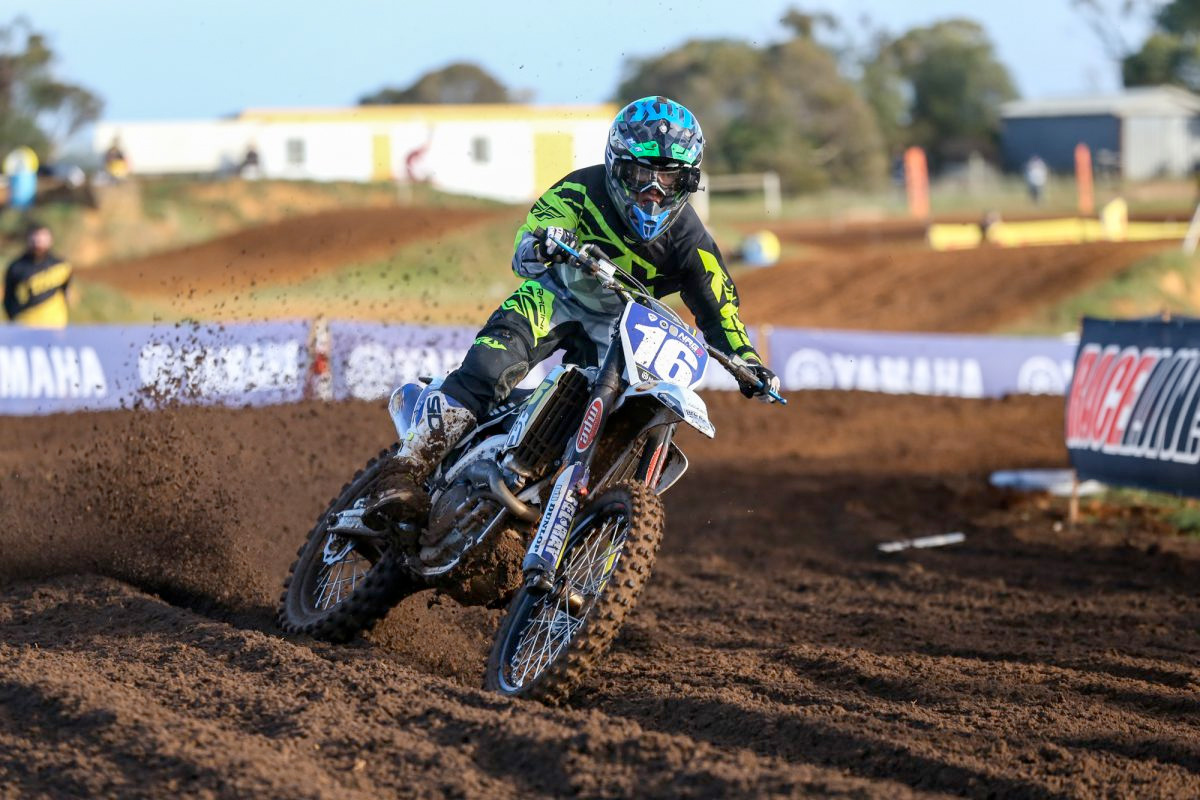 When the Pirelli MXD riders lined up for their first moto at Murray Bridge, rain had fallen on the sandy red circuit, providing a new challenge for the Under 19‰Ûªs category. When gates dropped and riders headed in to the first turn, SD3 Husqvarna‰Ûªs Barham used the first gate pick to his advantage taking the Raceline holeshot and moving in to the race lead.

After one lap on track Barham stretched his lead out on the rest of the field. Behind the Husqvarna rider was KTM‰Ûªs Liam Walsh in second, followed by third fastest qualifier from this morning Roberts in third.

With Barham managing a healthy lead so early in the moto, the attention shifted to the battle for positions behind him with Walsh, Roberts and Raceline Pirelli KTM‰Ûªs Morgan Fogarty all within striking distance of each other. It was Walsh however who cracked under the pressure, both Roberts and Fogarty making the pass on the KTM rider to move in to podium positions.

From there, Walsh continued to drop back, which allowed red plate holder Cody Dyce (Yamalube Yamaha Racing) to tag onto the battle for third and apply the pressure on Raceline‰Ûªs Fogarty.

With seven minutes remaining in race one, Barham continued to lead from Roberts, Fogarty and Dyce, while just outside the top four riders was Yamalube Yamaha‰Ûªs Cooper Pozniak who was battling hard to close in on the front runners.

Unfortunately lap eight spelled disaster for red plate holder Dyce, seen on the side of the track clutching his wrist and struggling to kick over his Yamaha machine, Dyce eventually re-joined the race just outside the top ten, effecting his championship hopes in all the wrong ways.

As the Pirelli MXD class approached the final laps in their first moto, spectators were treated to a three-way battle for the lead with Barham, Roberts and Fogarty all within a bikes length of each other.

But despite a last turn challenge for the lead from Roberts, Barham held his nerve, and when the chequered flag flew it was the SD3 Husqvarna rider who took the first race victory of the day and his first of the year ‰ÛÒ Roberts and Fogarty crossed the finish line in second and third places respectively. Fourth place in race one was taken by Pozniak, followed by Queenslander Isaac Ferguson in fifth. Riley Dukes, Wyatt Chase, Callum Norton, Walsh and Bulk Nutrients WBR Yamaha‰Ûªs Hugh McKay completed the top ten in race one.

Dyce, who had challenged for a podium early in the moto wrapped up the opening Pirelli MXD moto in a disappointing 16th position. 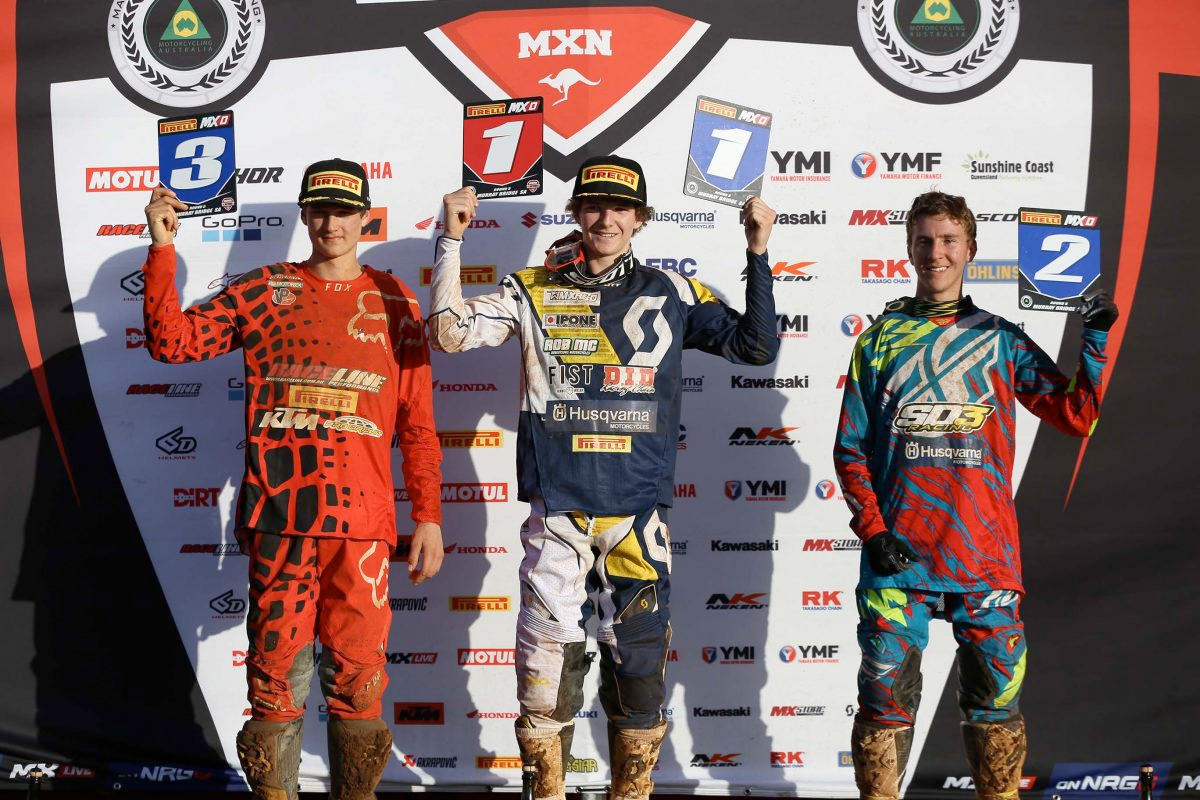 When race two commenced for the Pirelli MXD class, Pozniak took advantage of a big jump off the start, securing the Raceline holeshot and moving in to the lead, however after suffering a disastrous first moto, Dyce wasted no time in applying the pressure and only a few turns later made the move in to the top spot.

Behind Dyce and Pozniak, Roberts showed off his consistency occupying third place, followed by race one winner Barham, and Raceline Pirelli KTM‰Ûªs Fogarty.

With only 20 minutes on the clock in the final moto of the day, the Pirelli MXD riders were, doing everything they could to capitalise on the time that they had, but the one rider who continued to stretch out his lead on the field was Yamaluble Yamaha Racing‰Ûªs Dyce.

As riders reached the closing stages of race two, the track was becoming brutal, and line selection became more important than ever. Dyce continued to lead from Roberts who had gotten by Pozniak, while Barham continued to circulate in fourth.

With five minutes remaining, Roberts began to apply pressure on Dyce for the lead, however lappers were a clear factor and every time the pair got close another rider would get in between them.

But it was on the final lap that drama unfolded. Roberts went for an aggressive pass on Dyce for the lead and made a mistake which inevitably took both riders down, the pair were then forced to remount their machines and dash to the finish line.

But when the chequered flag flew it was Roberts who got to his feet quickest and secured the final race win. Second place went to Dyce while race one winner Barham crossed the finish line in third. Bulk Nutrients WBR Yamaha‰Ûªs Mckay finished race two in an impressive fourth position ahead of Fogarty in fifth, while Dukes, Chase, Ferguson, Brodie Ellis and Walsh completed the top ten.

However, with another two consistent performances in both races, it was Roberts who was awarded the round win in Murray Bridge this afternoon. Second place on the podium went to Barham, while consistency paid off for Fogarty who‰Ûªs 3,5 moto finishes saw him finish in third for the round.

Following the fifth round, Roberts now leads the Pirelli MXD championship by six points as the series commences the mid-season break.

‰ÛÏIt was a good day for us ‰ÛÒ we had two consistent finishes and managed to walk away with the overall so we‰Ûªre very happy,‰Û