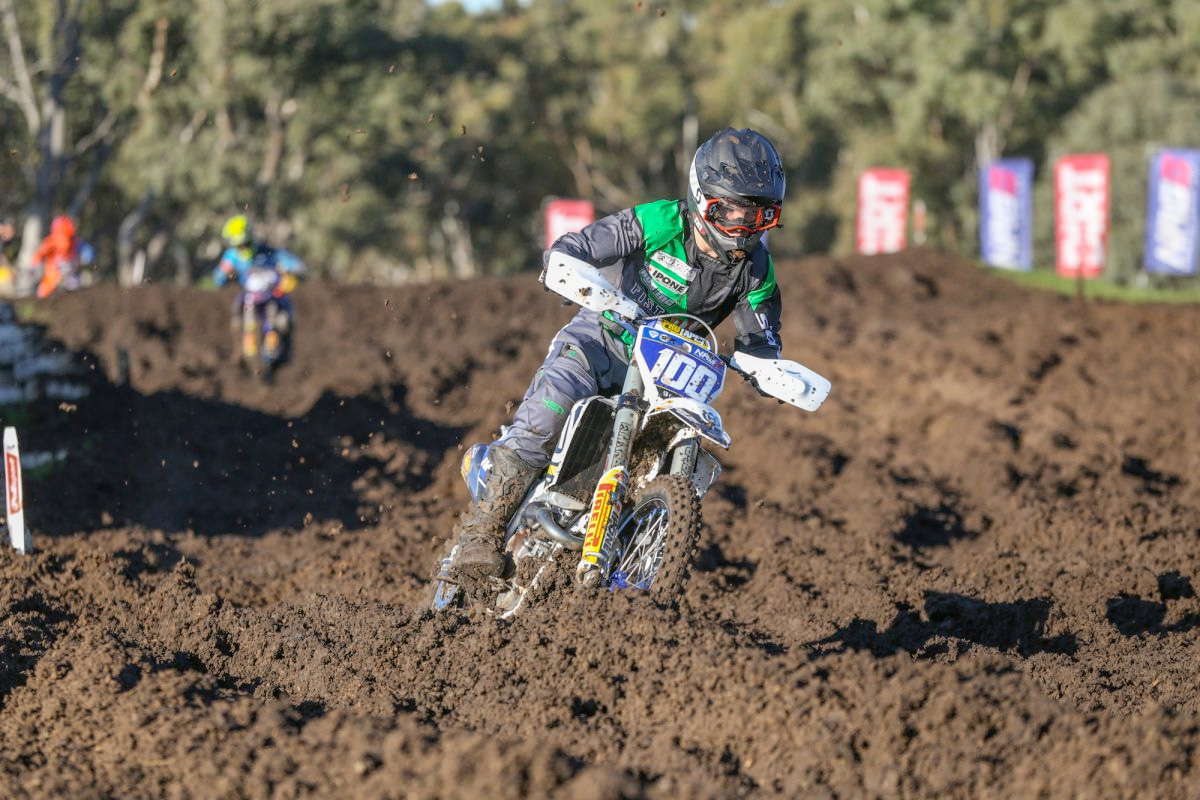 Tons of spectators watched on as the Pirelli MXD class took on gruelling track conditions at Round 4 of the Motul MX Nationals at Horsham today, with Husqvarna‰Ûªs Jy Roberts concluding the event with a round win for the first time this season.

It was a battle in the mud that MXD competitors were forced to contend with today, with Roberts putting in two consistent rides which saw him leave Horsham victorious.

The Pirelli MXD riders took on the mud and deep ruts during their qualifying session this morning, but it was actually SD3 Husqvarna‰Ûªs Kaleb Barham who topped the time sheets and secured first gate pick with a 2:32.904 lap time on his first and only hot lap. Second quickest this morning was New Zealander Wyatt Chase (2:36.039) followed by Dylan Wood who wrapped up the session in third (2:36.835).

The Pirelli MXD class lined up for their first race just after 11am this morning, and much like their qualifying session, the track was muddy and challenging. When the gate dropped, Roberts (Husqvarna) secured the Raceline holeshot and moved in to the race lead, followed by Chase, and Yamalube Yamaha Racing‰Ûªs Cooper Pozniak.

With the circuit dishing out the most difficult conditions of the season, riders were forced to be calculated and patient, and with 20 minutes on the clock in moto one, it was also imperative that riders kept the mud off their machines.

After only two laps, riders were close to unrecognisable with dirt covering the bikes and gear of all competitors. But despite having a number of moments, Roberts continued to lead. Pozniak made his way up to second place aboard his Yamaha, followed by Sam Pelz (Yamaha) in third.

A notable absentee from the front of the pack was red plate holder Cody Dyce, who after three laps was back in ninth position.

With the track continuing to change with every lap, the Pirelli MXD class showed plenty of maturity in moto one, and with eight minutes left on the clock, Roberts continued to keep his Husqvarna machine upright. Pelz who had been in third place dropped back to sixth allowing Wood to inherit the final podium position.

After 18 minutes, Roberts looked strong out in front, while Pozniak managed to hold on to second position from Wood in third. Chase and Jai Constintinou remained in fourth and fifth, while red plate holder Dyce had made his way up to sixth.

When the last lap board was finally displayed riders were nothing short of relieved, and with Roberts out in front, the Husqvarna rider simply had a single rotation left to collect a victory. And collect a win is exactly what Roberts did. Second place in race one was taken by Pozniak, while Chase was gifted third, thanks to a DNF from Wood. Constantinou wrapped up the opening Pirelli MXD moto in fourth followed by Bulk Nutrients WBR Yamaha‰Ûªs Hugh McKay who finished in fifth. Dyce, Tredinnick, Brodie Ellis, and Isaac Ferguson completed the top ten in race one for the Pirelli MXD class.

In the final Pirelli MXD moto it was Roberts once again who snatched up the Raceline holeshot, but it was Yamaha mounted Pelz who moved in to the early race lead, with red plate holder Dyce, and Roberts slotting in behind him.

With only 20 short minutes on the clock in race two, Dyce wasted no time chasing down the MXD race leader Pelz, and by the time riders headed in to lap two Dyce had made the pass and began to check out.

Behind the top two, Roberts continued to hold off WBR Bulk Nutrients Yamaha‰Ûªs McKay in fourth, while Ellis who had been in fifth dropped back to seventh position after four laps on track.

With riders‰Ûª relatively spread out as the second moto unfolded, McKay captured the attention of the crowd, making his way past Pelz for third position, however the track was simply unforgiving this afternoon, and only a lap later McKay went down but the Yamaha rider was able to re-join the pack in the same position.

As riders approached the later stages of the moto, SD3 Husqvarna‰Ûªs Barham came through the pack, passing both McKay and Pelz on the way to slot in to the final podium position. But with only two laps remaining, it was Dyce who looked solid and in control of the final moto.

So when the chequered flag flew for the final time at Horsham this afternoon, it was no surprise to see Dyce cross the line victorious, second place was taken by race one winner Roberts, while Barham wrapped up his final moto in third. Yamaha backed McKay and Pelz crossed the line in fourth and fifth places respectively, followed by Ellis, Raceline Pirelli KTM‰Ûªs Fogarty, Williams, Norton, and Wood who completed the Pirelli MXD top ten in moto two.

With 1,2 race results it was Roberts who secured the overall victory at the conclusion of todays racing for the first time this season, while red plate holder Dyce took in a solid haul of points taking second step on the Pirelli MXD podium. Third today was Bulk Nutrients WBR Yamaha Racing Team‰Ûªs McKay after racing to 5,4 race results at Horsham.