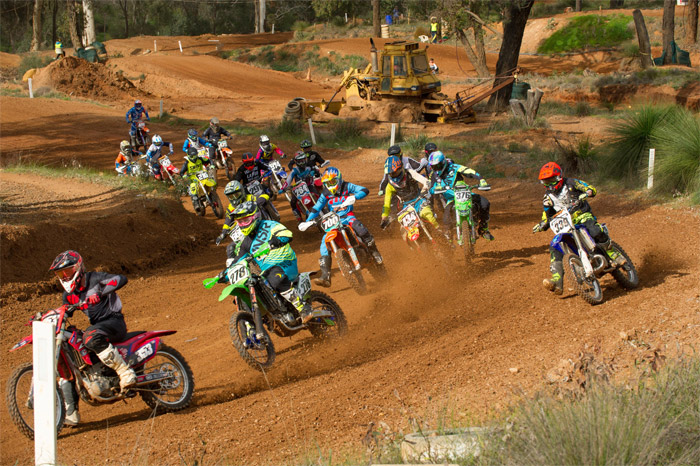 On Sunday the 19th of June the second round of the Make Smoking History WAMX Senior State Championship headed to Noble Falls in the Perth Hills for an action packed day of racing.

By far one of WA‰Ûªs most picturesque and also most hard-nosed circuit‰Ûªs riders face on the calendar as the headed to the BSA and Harley Davidson Motorcycle Club‰Ûªs home track for the second state championship round.

The hardpacked and undulating facility presented various challenges to the competitors with the threat of rain holding off as the day was run under sunny and overcast skies and the 2016 State Championships became very interesting in the points chase.

It was Dean Porter who rocketed out of the gates in the opening moto, with his lead was never challenged, going on to take the race win from Charlie Creech, Robbo Lovett and Craig Bolton.

Robbo Lovett (2-1-1) would repay the favour securing the remaining two motos with Porter‰Ûªs (1-2-7) scorecard enough to have him picking up second and Charlie Creech racing to third overall for the day.

Robbo Lovett‰Ûªs results have him retaining the red plate as the series leader by eleven points over Porter, and with the next round heading to the sands of Coastal Park on Sunday July 10th, and only 38 points separating first back to fifth in the championship standings it is a close title fight in the prestigious MX1 Class.

Possibly the most exciting racing this season in the MX2, with Luke Davis (2-2-1) dialling in his starts and Josh Adams chasing him down.

Adams (1-1-4) was on point to secure the round win until the last moto when he was involved in a first corner crash taking down Carson Bascombe, and Izaac Jones. Adams and Bascombe were able to re-join the race with Adams faultless in coming from position 33 to finish in fourth.

Luke Davis would take the round win by one point, and despite having his starts he believes his lack of bike time has him struggling with fitness.

‰ÛÏPicking up the round win is great, but not the way that you want to take the overall with Josh going down." Davis said. "He was on fire the first two motos as usual but this is a cruel sport and consistency is key, so I‰Ûªm happy with the win‰Û