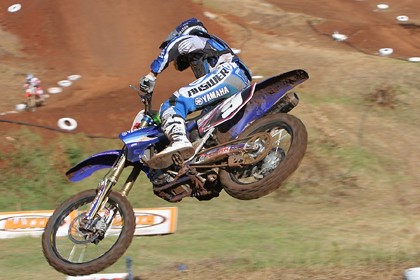 The Queensland rider has been in sensational form this year winning the Queensland Sunstate Championships, taking out three rounds of the national motocross series, and is currently leading the Nokia Supercross Masters.

After winning the opening 2005 Nokia Supercross Masters event at Brisbane Entertainment Centre two weeks ago Marshall became one of the hottest motocross properties for 2006. Team owner Gavin Eales left nothing to chance signing the talented youngster he had fostered through the national series from the age of nineteen.

"Robbie is going from strength to strength and at only twenty-one has a huge future in front of him," Eales said. "He has really matured this year and proven he is a true championship contender.

"I wanted to sign him for 2006 as soon as possible, he is an integral part of the Serco family having been with us since he turned professional and he can now focus on this year Supercross title.

"Now that Robbie is secure the next step for us is to work something out with Cameron (Taylor), we will start negotiating with him as soon as possible," Eales added.

With his immediate future determined Marshall said he can now concentrate on winning his first national Supercross title.

"It is fantastic to know what I am doing for 2006 already," Marshall said. "I can get on with the job at hand and not worry about where I will be racing next year.

"I think I surprised everyone with my motocross results this year and had I not torn my ankle ligaments it would have definitely been a one-two for Serco Yamaha. Hopefully we can achieve this at the Supercross Masters," Marshall said.

The Serco Yamaha team are preparing for the second round of the Nokia Supercross Masters which will be held at Adelaide Entertainment Centre on Saturday 20th August.